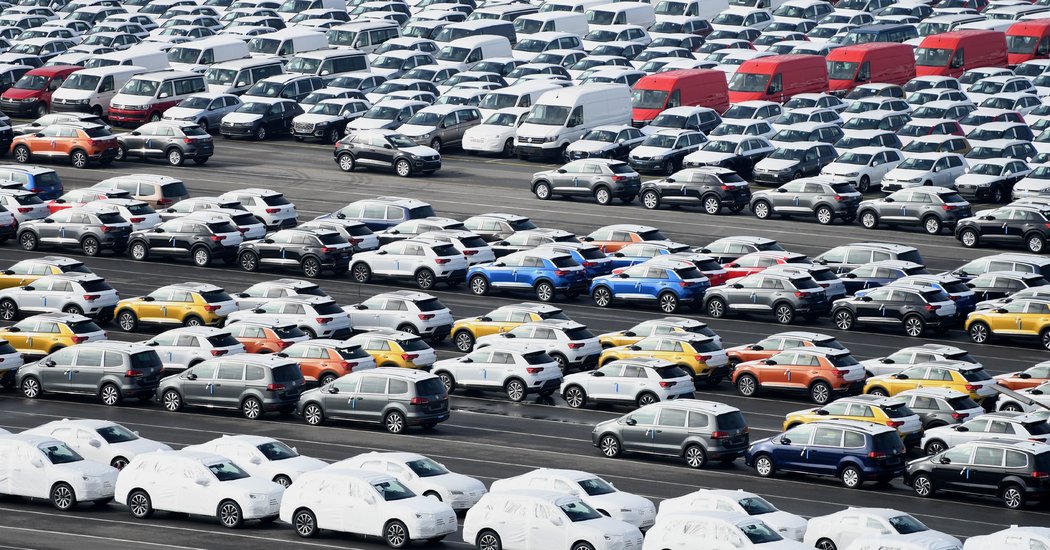 FRANKFURT — The once seemingly unstoppable German economy had the slowest growth of any eurozone country except Italy at the end of 2018, according to data published on Thursday that brought the impact of President Trump’s trade war into stark relief.

Germany’s economy did not grow at all in the year’s final quarter, and it barely avoided sliding into recession, the government statistics agency said.

One reason for the slowdown was conflict over trade. American tariffs are hurting German steel makers’ sales, and Germany is also experiencing collateral damage caused by a trade war between China and the United States.

The economic data was bad news for the rest of Europe. Germany has the region’s largest economy, and it typically sets the pace for the rest of the eurozone. The country has often helped haul its neighbors through periods of crisis, but it may no longer be able to play that role.

Germany’s position in next-to-last place among European Union countries is also a blow to its prestige. When Greece, Spain and Portugal were in dire straits during the last decade, German leaders scolded them over their economic policies and high debt. The economies of those countries are now growing more quickly than Germany’s, according to separate data published Thursday by the European Union statistics agency.

German carmakers and other companies rely on sales in China, where growth has slowed partly as a result of the Trump administration’s tariffs on Chinese goods. Volkswagen said Wednesday that its sales fell 3.4 percent in January compared with a year earlier in part because of weak demand in China, the carmaker’s largest market.

The fourth-quarter data released Thursday fell short of analysts’ projections, but it was good enough to narrowly avert a recession. In the third quarter, German economic output had dipped 0.2 percent from the previous quarter. Another three months of declining output would have met the common definition of recession.

Many economists expect the slowdown to continue. “It’s probably going to get worse before it gets better,” said Florian Hense, European economist at the German bank Berenberg. “Clearly this is not a two-quarter soft patch. It seems more serious.”

Germany’s woes will add to the grave problems facing Italy, including weak banks, erratic politics and a looming credit crunch. Germany is the biggest customer for Italian exports.

Mr. Trump’s trade war has been weighing on European growth since early last year, but the effect was mostly psychological until recently. The uncertainty created by the administration’s tariffs made manufacturers reluctant to expand factories or add workers.

The tariffs’ impact is becoming more tangible, cutting into the earnings of companies like Salzgitter, a steel maker in the German city of the same name. Salzgitter warned this month that pretax profit in 2019 would be half or less than the 347 million euros, or $391 million, that the company earned in 2018.

American tariffs on steel imports are partly to blame, although mostly indirectly, said Bernhard Kleinermann, a Salzgitter spokesman. The levies caused producers in countries like Russia and Turkey to flood Europe with steel they could no longer sell to customers in the United States, driving down prices.

Trade was not the only dead weight on Germany’s growth. Britain’s looming departure from the European Union, and the prospect that it might happen without an agreement covering future economic relations, was another significant source of anxiety.

German carmakers struggled to comply with tougher emissions standards, which delayed delivery of new vehicles. Even an especially dry summer played a role. The level of the Rhine River fell so low that barge traffic became impossible, holding up shipments of German chemicals that normally travel by water.

Those were temporary problems, though, making some economists optimistic that growth could improve in the coming months. The horizon will seem much brighter if Britain overcomes its political deadlock and works out a deal with Brussels, and if the United States and China can resolve their differences over trade.

Economists also expect the Chinese government to stimulate the country’s economy, which would help revive demand for German products like cars and machine tools.

Although Germany has been flirting with recession, it hardly feels like an economy in crisis. At 3.3 percent, the country’s unemployment rate is still the lowest in the eurozone. Consumers continue to spend, and businesses continue to invest.

“The fundamentals of the economy are still so solid,” Carsten Brzeski, an economist at ING Bank, said in an online video.

Many things could still go wrong. Mr. Trump continues to threaten to impose tariffs on imported European cars, a move that would strike Germany particularly hard because of the outsize role the auto industry plays in the country’s economy.