It’s one thing for our culture to develop an awareness of the power of microtargeting on social media—influencing people to buy a certain product or vote in favor of or against a certain candidate or issue. What has received less attention is the chain reaction that ensues as a result of microtargeting. Those who have been influenced go on to influence and not just on social media. 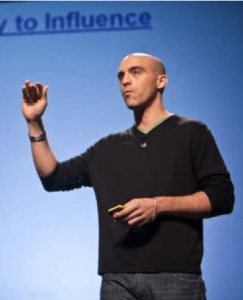 Once a microtargeting campaign changes the “influencer’s” ideas or behavior, that person may well go on to influence the behavior of friends and family outside the realm of social media says MIT Sloan’s Sinan Aral and Paramveer Dhillon in a new study published in Nature Human Behavior. “If you can change behaviors through microtargeting,” the authors say, “what role do influencers play in spreading those behaviors beyond the reach of the targeting campaign itself? That’s a crucial question for those wishing to influence everything from elections to health campaigns to product adoption.”

In the same way that Facebook data can be used to improve the targeting of persuasive messages, this pioneering study proves that empirical data can actually improve the identification of influencers. Aral and Dhillon demonstrate that the use of empirical data can maximize influence by up to 87%, simply by reaching—and changing the behavior—of more people. The influencers identified through data have more cohesive, embedded ties with their contacts.

Data can be used for good or ill

Aral adds a cautionary note that such data can be used for good or ill. For example, influencers can be tapped to interfere with legitimate democratic elections through the spread of propaganda. At the same time, they can encourage people to quit smoking or help them recognize the signs of heart disease.

Sinan’s research focuses on social contagion, product virality, and measuring and managing how information diffusion in massive social networks such as Twitter and Facebook affects information worker productivity, consumer demand, and viral marketing. He has received a number of awards for his research, including the Microsoft Faculty Fellowship, the PopTech Science Fellowship, an NSF CAREER Award, and multiple “best paper” awards. Sinan was also recently named among “The World’s Top 40 Business School Professors Under 40” by Poets & Quants. Coauthor Paramveer Dhillon, who is working closely with Sinan in this area, is a postdoctoral associate in management science at MIT Sloan.