Home » News, Insights & Trends » Leader » Blockchain as a Force Multiplier in Smart Cities and Beyond

Arwen COO David Fragale SF ’15 has spent the last several years advising governments, financial institutions, Fortune 100 companies, and startups about blockchain technologies. As cofounder of Atonomi, Fragale helped launch an Ethereum-based platform that provides trusted interoperability for internet-of-things (IoT) devices. “We registered the identity and reputations of devices on an immutable blockchain ledger,” he says. “By working with device manufacturers and infrastructure stakeholders, we were helping to create a universal trust environment that enables interoperability of billions of devices for data and commerce.” 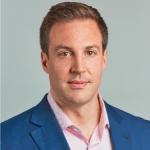 Fragale’s initial focus was on smart-city environments, where potential benefits include coordinated vehicle and signal controls for traffic flow and emergency vehicle access. “In the near term, for example, data from sensors and control devices on a blockchain can optimize routes for ambulances and fire trucks responding to emergencies,” says Fragale. “Travel can be made faster and safer as software turns lights red to clear intersections along the route. Looking further into the future, we foresee automated systems that pull cars to the curb and clear the street for first responders.”

In the healthcare realm, Fragale envisions medical IoT devices such as pacemakers that would support more attentive care for people living far from hospitals. “We’d also have the ability to amass powerful data sets that could vastly improve predictive analytics,” he says. “IoT is a significant force multiplier in healthcare if—and this is a big if—we can provide the necessary security, privacy, and trust that people need in order to feel confident about opting in.”

Challenges inherent in physical components—electronic and human
Security is a hurdle for both software and hardware, explains Fragale. “The risk of hackers penetrating code is on everyone’s radar these days, but we also have to protect data-sharing devices. In theory, anything physical can be tampered with.” Blockchain can address this vulnerability with applications that detect—and allow distributed third-party auditors to detect—and deal with bad-device actors.

“Another fundamental challenge for IoT is human nature. You can’t abstract people out of the IoT ecosystem and expect it to function reliably,” Fragale says. “As a potential weak point in the chain, humans can be very lazy and inconsistent about downloading security patches and software upgrades. Assuming that we continue to play a role in connecting our devices to IoT, developers must create incentives that promote responsible behavior.”

The next generation of security
Fragale has recently taken on a new role as COO of Arwen, a blockchain-based company in Boston. Arwen is developing a secure trading protocol for the exchange of cryptocurrencies and digital assets. In 2018, more than $7T worth of cryptocurrency was traded while an estimated $1B was lost due to crypto exchange hacks. Arwen allows traders to swap crypto assets like bitcoin on these exchanges without ever transferring custody to the exchange. Instead of trusting a third party or central authority, such as an exchange, traders use the blockchain as an escrow agent to perform an “atomic swap” of cryptocurrencies. Fragale notes, “Arwen is the most secure way to trade crypto. You can trade on an exchange without ever having to trust that exchange. Even if the exchange is hacked during your trade, your coins are safe.”

The Best High-Tech Cars For Your Dream Car Collection
Seek And You Shall Find: Three Tips For Setting Negative Interactions Straight
Here’s A Career Wake-Up Call: At The End Of Your Career Or On Your Deathbed, How Would You Like To B...
12 Holiday Gifts That Will Help Your Workers Be More Productive
Category: Leader
Tags: Business News, Business Updates