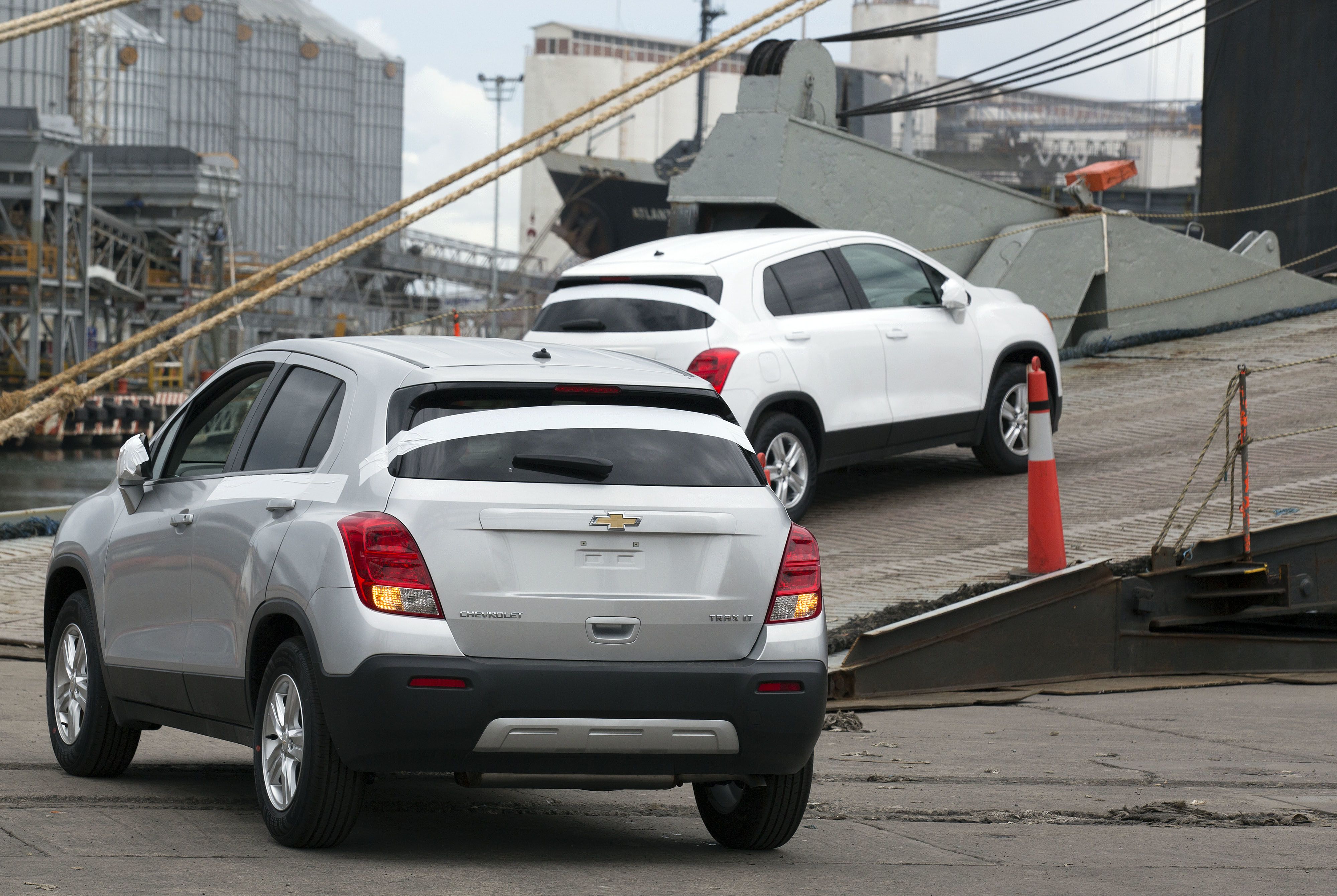 General Motors Co. Chevrolet Trax LT vehicles are driven up the ramp to a cargo ship at the Port of Veracruz in Veracruz, Mexico.

President Donald Trump‘s trade war with China is not the only conflict with a major trading partner raging ahead of his reelection bid.

Trump, who campaigned in 2016 on cracking down on what he calls unfair trade practices, has stirred trade conflict on even more fronts. From Canada and Mexico to the European Union and Japan, the president faces pivotal moments in his crusade to reshape U.S. trade relationships ahead of the 2020 election.

Trump has a difficult path to following through on his trade agenda while avoiding damage to a strong U.S. economy. He will have to decide whether to slap threatened tariffs on the $325 billion in Chinese products that remain untaxed. He aims to ratify updates to the North American Free Trade Agreement, but some lawmakers want him to remove steel and aluminum tariffs on Canada and Mexico before they will support a deal.

Trump already put duties on steel and aluminum imports from the EU. Now, the president is set to decide in the coming days whether he will slap tariffs on European cars. The EU could retaliate if Trump makes good on his threat.

Here are the areas where the president will have to navigate trade conflicts in the coming months.

Beijing fired the latest shot in the economic struggle Monday, raising tariffs on $60 billion in U.S. goods to as high as 25%. China retaliated following the Trump administration’s decision to hike duties on $200 billion in Chinese products.

The Trump administration has slapped tariffs on $250 billion in Chinese goods so far. Beijing has put duties on $110 billion in products from the United States.

Still, the conflict could widen even more after Monday’s retaliation from China. Trump has already threatened to put 25% tariffs on the $325 billion in Chinese goods that remain untaxed. He said Monday that he has not decided yet whether to levy the duties.

Trump hopes the tariffs will force China to strike a trade agreement. But the longer the conflict goes on, the more it could hurt American consumers and businesses. Farmers — a key political constituency for Trump — have suffered from lower crop prices caused in part by the trade war.

“The sentiment out in farm country is getting grimmer by the day. Our patience is waning, our finances are suffering, and the stress from months of living with the consequences of these tariffs is mounting,” John Heisdorffer, chairman of the American Soybean Association, said in a statement Monday.

The Trump administration still hopes it can salvage a trade agreement. On Monday, Trump said he will meet with Chinese President Xi Jinping at the G-20 summit in Japan next month. Treasury Secretary Steven Mnuchin also told CNBC that trade talks with China are ongoing.

Last year, the Trump administration decided not to spare its neighbors from tariffs of 25% and 10% on steel and aluminum, respectively. Both Canada and Mexico retaliated.

Canada retaliated by putting duties on more than $12 billion worth of U.S. exports, including whiskey and maple syrup. Mexico also slapped tariffs on about $3 billion worth of American goods. Both countries have reportedly considered new retaliatory measures to pressure the U.S. to drop the metals duties.

Congress — and particularly the Democratic-held House — has shown little haste in trying to ratify the updates to NAFTA, which Trump has dubbed the United States Mexico Canada Agreement. The Trump administration and the Mexican and Canadian governments have pushed for ratification as soon as this summer.

Tariffs have tripped up progress toward approving the deal. Senate Finance Committee Chairman Chuck Grassley, R-Iowa, has pushed the president to remove the duties before Congress ratifies the agreement.

Trump has so far shown reluctance to scrap the tariffs.

The U.S. and EU are working to avoid an escalation in a limited trade conflict. Last year, after Trump put tariffs on steel and aluminum from the European bloc, the EU levied duties on $2.4 billion worth of products such as whiskey and motorcycles.

Trump faces a May 18 deadline to decide whether to put tariffs on up to $53 billion worth of European cars. EU Trade Commissioner Cecilia Malmstroem reportedly thinks the Trump administration could delay the deadline as it focuses on inking a deal with China.

The EU has prepared another round of retaliatory tariffs to put in place if Trump goes through with the auto duties.

The Trump administration also hopes to reach a trade agreement with the EU, but officials representing the bloc have said they do not want to negotiate under the threat of tariffs.

Japan and the U.K.

The Trump administration has to handle other trade negotiations as it tries to deescalate conflict with China, its North American neighbors and the EU. The White House hopes to reach a bilateral trade deal with Japan that could increase U.S. agricultural access to the country and stop potential U.S. tariffs on Japanese cars.

Trump took on the task of striking a direct deal with Japan after he withdrew from the 12-nation Trans-Pacific Partnership agreement shortly after he took office in 2017.

The president also hopes to strike a new trade agreement with the United Kingdom. The U.K. has seen delays in its plans to leave the European Union, which was previously expected to happen at the end of March.

Trump will likely address trade when he visits the U.K. in June.

U.S. economy added 136,000 jobs in September, in fresh sign economy is cooling
It's been a record-breaking year for CEO departures. Here are the 28 most dramatic exits.
Roaches, crickets, and superworms: How a 34-year-old capitalized on an SEO keyword to build a creepy...
Bank pummeled as rates dive, but analysts say these stocks are already 'priced for a recession'
Category: Business
Tags: Business News, Business Updates