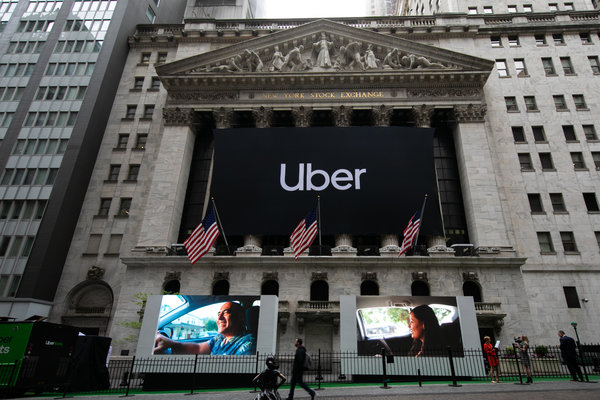 That was the figure the bankers said they could convince investors Uber was worth when it listed its shares on the stock market, according to three people with knowledge of the talks. Uber’s chief executive, Dara Khosrowshahi, and chief financial officer, Nelson Chai, listened and discussed the presentations, these people said. Then they hired Morgan Stanley as lead underwriter, along with Goldman Sachs and others, to take the company public — and to effectively make the $120 billion valuation a reality.

How Uber’s offering turned into what some are now openly calling a “train wreck” began with the $120 billion number that the bankers floated. The figure leaked last year, whipping up a frenzy over how Uber could soon become the biggest American company to list on an American stock exchange — larger even than Facebook, which went public in 2012 at a whopping $104 billion valuation.

But for Mr. Khosrowshahi and Mr. Chai, the $120 billion number turned Uber’s I.P.O. process into an exercise in managing expectations. Some large investors who already owned Uber shares at cheaper prices pushed back against buying more of the stock at such a lofty number, said people familiar with the matter. Their appetite for Uber was dampened further by the company’s deep losses and slowing growth in regions like Latin America. And Uber had to contend with unforeseen factors, including fraying trade talks with China that spooked the stock market in the same week that the company decided to go public.

The result has created a host of pointed questions for all involved in Uber’s I.P.O., from Mr. Khosrowshahi and Mr. Chai to the underwriters at Morgan Stanley, Goldman Sachs and Bank of America. While Uber raised $8.1 billion from its offering and reaped billions of dollars in returns for its early investors and founders, what should have been a climactic moment for a transportation colossus instead became an embarrassment.

The extent of the fallout may not be clear for a while, and it is too early to judge how Uber will ultimately fare in the public markets. But as many other tech-related companies aim to go public this year, including the food-delivery company Postmates and the real-estate firm WeWork, they will have to contend with whether Uber has squelched what had been a red-hot I.P.O. market.

“The $69 billion market cap Uber had when the market closed today is a new reality,” said Shawn Carolan, partner at Menlo Ventures, which invested early in the company. But he added that Uber’s executives now had “the opportunity to show us what they can do.”

This account of Uber’s I.P.O. was based on interviews with a dozen people involved in or briefed on the process. Many asked to remain anonymous because they were not authorized to speak publicly. Representatives from Uber, Morgan Stanley and Goldman Sachs declined to comment.

For years, Uber was an investor darling. As a privately held company, it gorged on capital from venture capital firms like Benchmark and GV, mutual fund firms like Fidelity Investments, and companies like SoftBank. Its private valuation shot up from $60 million in 2011 to $76 billion by August.

Mr. Khosrowshahi, who became chief executive in late 2017, was recruited partly to steer Uber through a successful I.P.O. Uber’s board agreed to pay him $45 million in cash and restricted stock — and set an unusually specific valuation target for an additional bonus. In a provision in Mr. Khosrowshahi’s compensation agreement, which was revealed in the company’s I.P.O. prospectus, the board said that if Uber was valued in the public market at $120 billion or more for at least three months in the next five years, he would receive a payout of $80 million to $100 million.

That provision set something of a goal for Uber, which the investment bankers who were hired to take the company public also gravitated toward. Within weeks of the banks’ presentations on the $120 billion, that number leaked, leading to giddy speculation in Silicon Valley and on Wall Street that Uber’s offering could usher in a golden era of wealth.

By December, Uber’s I.P.O. team was set. At the company, Mr. Chai, a former chief financial officer at Merrill Lynch, was charged with leading the public offering. At Morgan Stanley, Michael Grimes, the firm’s star tech banker, was the point person, assisted by Kate Claassen, head of internet banking. Goldman Sachs’s team was led by Gregg Lemkau, Kim Posnett and David Ludwig. Bank of America’s was headed by Neil Kell and Ric Spencer.

Almost immediately, the setbacks began, starting with Uber’s business. Its once-meteoric growth rate was slowing as its geographic expansion appeared to be running out of room and as competitors continued springing up across the world.

One growth headache was connected to Uber’s biggest investor, SoftBank. The Japanese company, which has a $100 billion Vision Fund that it uses to invest in all manner of companies, has poured capital into technology start-ups including Didi Chuxing, China’s biggest ride-hailing company, and 99, a transportation start-up in Latin America.

For Uber, the timing was terrible. The region was one of its most promising growth areas, and its competition had ramped up. By this February, the damage in Latin America had begun showing up in Uber’s results in the form of slowing growth.

SoftBank and Didi declined to comment. (Uber and Didi own shares in each other as well.)

The slowing growth led to lukewarm investor demand for Uber’s shares, according to two of the people involved in the matter. Some investors argued that Uber needed to price its offering lower, these people said.

Some investors were also resisting because they had earlier invested in Uber at cheaper prices. Since its founding in 2009, Uber has taken in more than $10 billion from mutual fund firms, private equity investors and others, meaning that its stock was already widely held among those institutions that traditionally buy shares in an I.P.O. So the I.P.O. essentially became an exercise in getting existing investors to purchase more shares — a tough sell, especially at a higher price.

In March, another problem cropped up. Uber’s rival in North America, Lyft, went public and promptly fell below its offering price on its second day of trading. Investors appeared skeptical about whether Lyft could make money, setting a troublesome precedent for Uber.

By the time Uber made its I.P.O. prospectus available in April, it had already told some existing investors that its offering could value it at up to $100 billion — down from the initial $120 billion.

Inside Uber, two people familiar with the deliberations said the company’s board was also not fully briefed on how Mr. Khosrowshahi and other executives planned to pitch the firm to investors in what is known as a “roadshow.” Only a smaller group of board members, who were part of a pricing committee — including Mr. Khosrowshahi, Ronald Sugar, who is also Uber’s chairman, and David Trujillo of TPG — focused on the I.P.O., these people said.

Another person close to the board said that all board members were invited to attend pricing discussions and I.P.O. event planning, and that all materials from the pricing committee were made available. Some members were more active than others, the person said.

In late April, Uber proposed a price range of $44 to $50 a share for its offering, putting its valuation at $80 billion to $91 billion, below the $100 billion it had floated just a few weeks earlier.

The company soon hit other obstacles. President Trump tweeted this month that he wanted to raise tariffs on $200 billion of Chinese goods, unsettling global stock markets. The day before Uber priced its I.P.O., Lyft reported a $1.14 billion loss for its first quarter, renewing questions about the health of ride-hailing businesses.

Uber’s executives, board and bankers discussed the final pricing of the stock sale on May 9. Several board members pushed for a price at the higher end of the $44- to $50-a-share range, said the people briefed on the situation.

But Morgan Stanley, Goldman Sachs and others agreed that it needed to be lower, they said. The list of orders from potential investors, known in Wall Street jargon as the “book,” showed that the most desirable investors — the big asset managers who were most likely to hold on to the shares, even in tough times — were interested only in the lower price.

That evening, Mr. Khosrowshahi and his management team gathered in Manhattan at Daniel, a Michelin-star restaurant a few blocks east of Central Park, at a “pricing dinner” hosted by Morgan Stanley. The mood was upbeat, according to two people familiar with the evening.

But the next morning, that mood had changed. Uber executives arrived at the New York Stock Exchange, where the company was listing its shares. Before the first trade, monitors that lined the exchange floor displayed how Uber’s stock was likely to fall — flashing up $45, $44, before finally opening at $42. The chatter quieted.

The rest of the day was little better. Uber’s stock never rose close to its $45 offering price. As the so-called stabilization agent, charged with helping trading in Uber stock, Morgan Stanley made some moves to support the shares, according to people with knowledge of the matter. Yet by the end of the day, while the S&P 500 index closed up, Uber’s stock remained down.

On Wednesday, Uber closed at $41.29, more than 8 percent below its offering price.