Despite some recent disappointing jobs numbers recently, companies in the third quarter are expected to hire at a pace not seen in 13 years, according to a survey Tuesday from ManpowerGroup.

Overall, 21% of employers say they’ll be adding to payrolls in the July-to-September period, the workforce solutions group said in its quarterly look at employment trends.

That number is 2 percentage points better than the April-to-June period and 3 points above the level a year ago.

Geographically, the Midwest reported its best outlook in 18 years, with 21% of companies saying they expect to add to employment rolls thanks to growth in leisure and hospitality and construction. The West had the strongest projections overall, with 22% forecasting growth, while the South reported 19% seeing an increase and 19% of Northeast companies expecting to accelerate.

Charlotte, North Carolina looks to be the most active metro area, with a net 37% of companies planning to hire more, while Grand Rapids, Michigan was second at 36% and Madison, Wisconsin third with 34%. New York was last among major metro areas, with just a net 8% of firms looking to add workers. 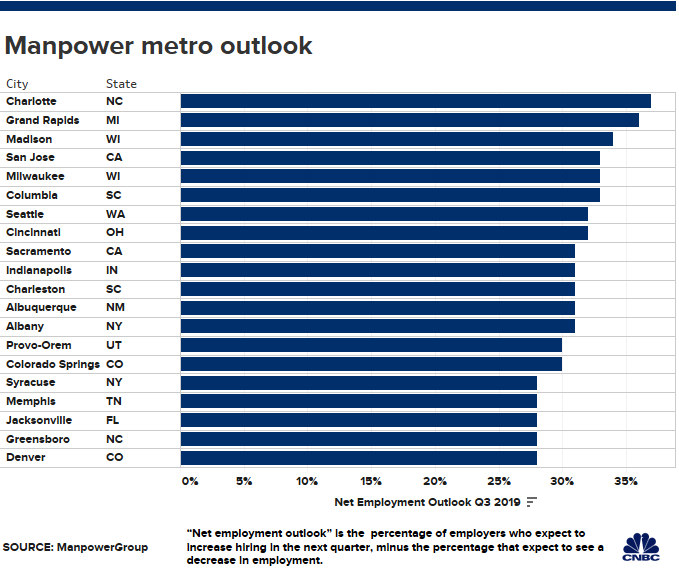 Professional and business services is expected to be the most active industry, with a 28% growth rate, followed by leisure and hospitality (27%) and transportation and utilities (24%). 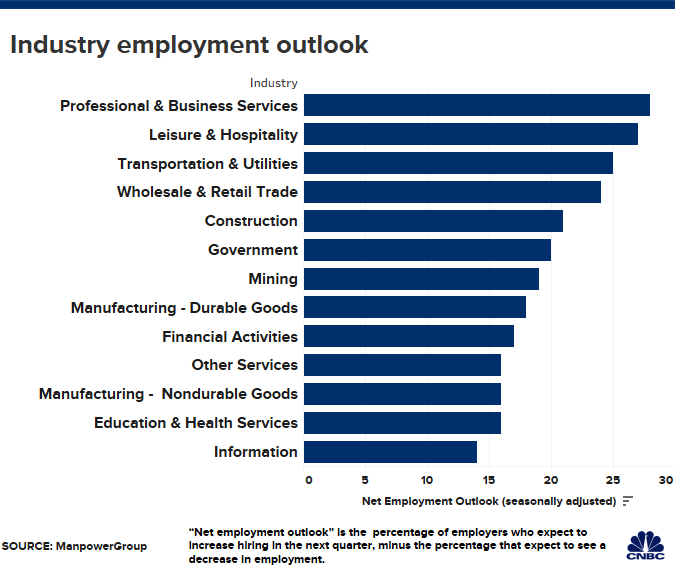 The growth in hiring comes at a time when other jobs numbers haven’t been as encouraging.

Nonfarm payrolls growth in May came in at 75,000, much less than economists had been projecting and part of an overall slowing trend that has seen monthly gains in 2019 average 164,000 compared to 223,000 a year ago.

However, evidence remains that there is still substantial slack left in the market.

Job openings continue to vastly outnumber the amount of unemployed, with April showing a gap of more than 1.6 million as companies continue to struggle to find workers with adequate training for the types of positions that are open. The skills gap is likely to remain an issue for the labor market, though employers have been shifting strategy to try to find the right hires.

The unemployment rate also remains at 3.6%, its lowest level in nearly 50 years.

“With such strong competition for talent, skilled workers are choosing when, where and how they work,” Becky Frankiewicz, president of ManpowerGroup North America, said in a statement. “To find and retain top talent, the best companies are offering holistic benefits packages with accelerated training programs and opportunities to learn, earn more and move up so employees have the skills for jobs today and tomorrow.”

The Manpower U.S. survey entailed more than 11,500 employers across all 50 states along with the District of Columbia and Puerto Rico.

A global survey also found solid hiring trends, with Japan a leader among countries while all four of Europe’s largest economies — the UK, France, Germany and Italy — also projected growth. In emerging markets, Croatia, Greece and Slovenia had the strongest outlooks.