When the bull market has its last hoorah, most likely technology and internet stocks will be at the top of the hill, leading the charge.

But before that, analysts have diverging views on how much and which names investors should hold in a group of stocks that are dogged by regulatory issues, trade war conflicts and earnings pressures.

“We’re still pretty cautious. [Tech] had a rebound, but if you look beyond [those] five days, it’s a pretty big underperformer…A part of this is a reversal based on sentiment,” said Dan Suzuki, portfolio manager with Richard Bernstein Advisors. 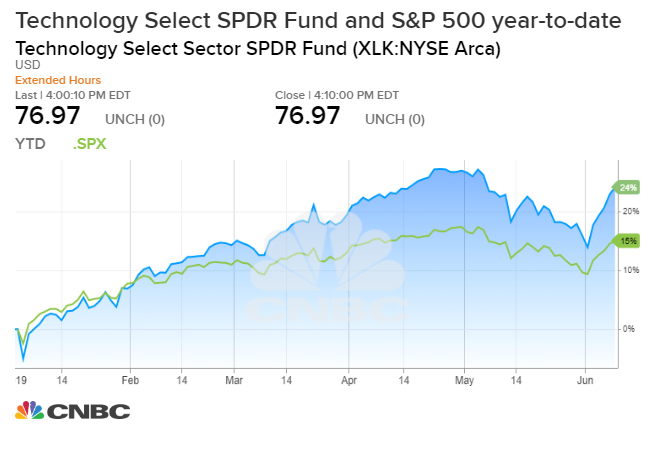 Tech has been hit by worries about the trade war with China, and semiconductors were suffering a supply demand imbalance in the beginning of the year. Internet names, in particular have been overshadowed by a wave of regulatory interest from everyone from Congress to the Justice Department, state Attorney Generals and even the G-20, which wants to create new rules for taxing the digital companies globally.

“You tend to have all these risks, but at the same time, those are all factors we’ve been wringing our hands over for the last several weeks at least. It seems with all these things, the more we talk about them, the less significant they’ve become,” said Paul Hickey, co-founder of Bespoke. “In order for the market to get to new highs, tech can’t fall apart but it could be a market performer and even lag a little bit if other areas pick up the slack.” 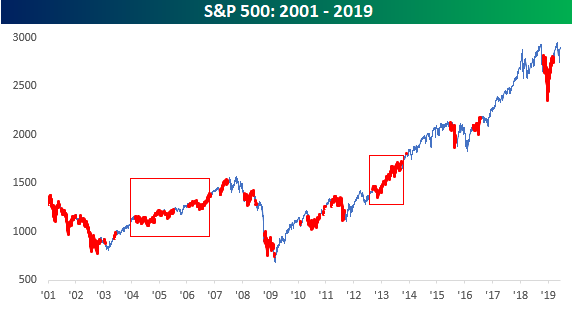 Suzuki said he does see a scenario where tech could outperform for a period. If there’s a typical end of bull market rally, at that point, tech could take a leadership role. He also said the sector has the best balance sheets in the S&P, and in a downturn would encounter less pressure from debt concerns. In the now 10 year-old bull market, tech has been the leader — gaining 572% since March, 2009, compared to the 327% gain in the S&P 500.

“The most bullish argument for tech is if we get another bout of rising optimism for the markets, tech would be one of the big beneficiaries,” he said.

Art Hogan, chief market strategist at National Securities, said he expects a China trade deal to be struck well before the end of multiple investigations against companies like Facebook and Alphabet, which could go on for years. A trade deal should help the performance of a whole range of companies, like Apple and semiconductor makers like Qualcomm and Micron.

Hogan said the digital companies such as Facebook and Alphabet, which were among the hottest performers, will most likely give up leadership to other tech giants, like Cisco and Microsoft.

“There’s never a quick fix to this, ” said Hogan. “That is a much longer overhang, I would expect that technology will still be leadership, but it’s not going to be the names we’re used to.”

Strategists’ views of the tech sector is also shaped by their expectations for the economy. Suzuki said he sees a slowing economy, negative for cyclicals, like tech, but James Paulsen, chief investment strategist at Leuthold Group said he expects an improving economy.

“I kind of think the global economy is going to pick up in the second half. I understand the obsession has been with China and trade, but I think the bigger elephant in the room that doesn’t get much attention is there’s been a ton of policy stimulus this year after tightening last year,” Paulsen said.

Paulsen said he believes tech will lead and it’s a good place to invest, but smaller cap tech names in the S&P 600 may perform better than the big names that are under assault. “The FANG names have kind of lost their leadership,” he said, referring to Facebook, Amazon, Netflix and Alphabet. “But S&P 500 tech sector has certainly taken over.” The tech sector includes software, chips and hardware names.

As for the regulatory worries, Paulsen said he expects tech to become much like big pharma and health care, which faces periodic threats on pricing and other issues.

“I think it’s more about that ultimately what we’re going to end up doing is changing the profit models for this sector…It’s hard to know where that will shake out, but you know it’s gong to continue to be bombarded,” he said. “I don’t see where antitrust is going to wave over and kill the industry. I think this is going to be more a chronic problem than an acute one.”

But some analysts see silver linings to some of the industry’s most concerning dark clouds. Needham analysts, for instance, said Tuesday that the shares of Alphabet, parent of Google, have been overly punished by investors worried about regulatory scrutiny. Alphabet has lost 20% since April.

“We believe economic risks associated with regulatory outcomes are overdone, especially now that the DOJ has jurisdiction and only an anti-trust agenda, not privacy goals,” they wrote in a note.

The analysts said they see a 90% chance that the Justice Department will investigate the company, which it has wanted to do since 2013. They expected elevated regulatory scrutiny would add to margin pressures and costs for two to four years but have little impact on revenue growth or consumer usage.

The analysts said they believe there’s a 50% chance that the Justice Department will find anti-competitive behavior, with a 25% chance that it will force the break-up of the company three years from now.

“In this scenario, we calculate the upside to shareholders is about 148%,” they noted. That would be based on splitting up the company and valuing its business separately, including search at $600 a share, YouTube at about $200 and the Android App store at $100.

Earnings pressures have also been an issue. The earnings for the S&P technology sector are expected to decline even more in the second quarter than they did in the first quarter, and the 8.3% drop is expected to be the second worst of the 11 major S&P sectors. The tech sector’s earnings shortfall also includes double digit declines in hard hit semiconductors. The big cap tech sector’s profits were down 1.1% in the first quarter.

According to Refinitiv, the semiconductor and chip equipment maker industry group’s earnings were down 16% in the first quarter and are expected to be down 27.7% in the second quarter. They are expected to turn positive again in early 2020.

The S&P 500 Communications Services sector, which includes internet stocks like Google and Facebook, saw earnings decline 9.9% in the first quarter but is expected to see a rebound of 16.4% in the second quarter, according to analysts polled by Refinitiv.

In contrast, earnings for all S&P 500 companies gained 1.6% in the first quarter and are expected to be flattish with a 0.4% gain in the second quarter, according to Refinitiv. For all of 2019, S&P 500 earnings are expected to be up 2.7%. That would compare to a 2.1% decline for the S&P tech sector, and the semiconductor group’s profits are seen falling 18.2% for the year. 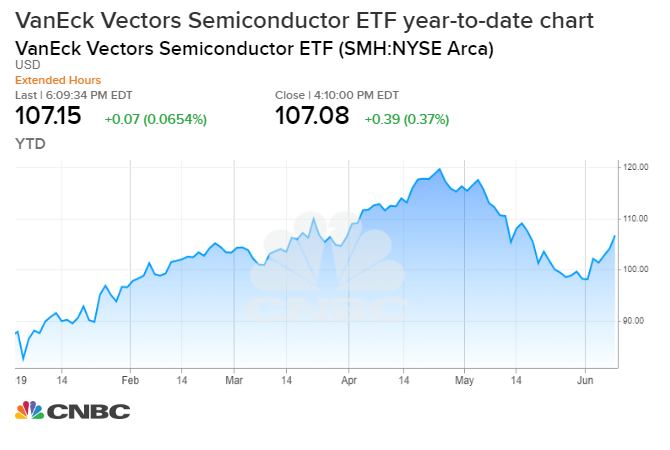 Semiconductors have been in the dog house but may be getting ready to emerge. They have been at the center of concerns about China trade, but have rebounded whenever it appeared there could be a positive outcome. They also are at risk of losing revenues with the U.S. crackdown on China telecom company, Huawei. The SMH Van Eck Vectors Semiconductor ETF fell 8% from late April to June 3, but since then is up 8.7%.

Jefferies analysts said Tuesday that they see the inventory issues with the sector to largely be played out, and they believe semis are positioned for a period of upward revisions and outperformance.

“On average for Q1 earnings season, semis provided an outlook for C2Q that was below Street expectations, and traded up for the 3rd consecutive quarter. We view this as consistent with our sense that sentiment has been too negative on the group,” they wrote.

CNBC’s Juan Aruego and Michael Bloom contributed to this story