Every day, cybercrimes are increasing in complexity and scope. With 2.5 million data breaches worldwide in 2017, businesses large and small are increasingly arming themselves against potential threats. From major corporations to local businesses to governments, the world is waking up to the realities of digital threats. But even as cybersecurity spending surges (expected to grow from $152.71 billion in 2018 to $248.26 billion in 2023 at a compound annual growth rate of 10.2%), there is a worrisome lag in defensive innovation.

Many of today’s most innovative approaches to cybersecurity still depend on human analysts, while cyberattacks employ advanced machine learning techniques to invade, disguise, and confuse. It is widely acknowledged that the pace of cybersecurity innovation has not kept up with the creativity of adversaries.

Given that the cybersecurity market is not organically innovating quickly enough to protect against the cyberthreats of the future, the New York City Economic Development Corporation (NYCEDC) is working to rapidly catalyze innovation.

In December of 2017, NYCEDC announced Cyber NYC, a $100 million public-private investment to make New York City a global leader in cybersecurity and catalyze 10,000 jobs. The setting was ripe for opportunistic industry leaders to take a leading role in the initiative. In October 2018, after a rigorous request-for-proposals process, NYCEDC announced its winning partners—SOSA, Jerusalem Venture Partners, Columbia Technology Ventures, and a suite of educational partners.

SOSA, a corporate innovation consultancy from Tel Aviv, will operate the Global Cyber Center. Located in Chelsea and slated to open in fall of this year, the Global Cyber Center will provide local industry with curated events and programs—offering co-working space for domestic and international startups, corporate innovation teams, and investors. In advance of this initiative, NYCEDC conducted more than 200 stakeholder interviews, which showed a clear demand for physical space in New York City for the cybersecurity community. 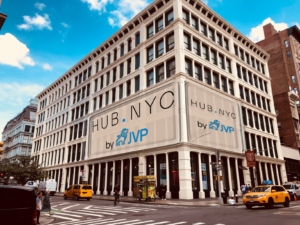 In response to this feedback, the center will serve as the go-to convening space for the cyber industry in NYC and as a landing pad for startups with ambitions to expand to NYC. Once operational, the Global Cyber Center will host up to 150 events, with approximately 4,000 attendees per year. In the meantime, SOSA’s current space in the Flatiron neighborhood of NYC is already hosting events, companies, and international delegations to nurture its community and make it as diverse and extensive as New York City itself.

“From industry-specific events to a virtual testing ground to run simulations, companies from around the globe will be able to work together at the Global Cyber Center to drive strategic advancements,” said Uzi Scheffer, SOSA CEO. “We look forward to many collaborations and the resulting development of new technologies that will support businesses and consumers in today’s society and in the future.”

In their efforts to attract the most prominent leaders in cybersecurity, Cyber NYC has partnered with Jerusalem Venture Partners on the Hub.NYC by JVP. Like the city itself, Hub.NYC by JVP will be a nexus of talent, resources, and opportunities. Slated to open in summer 2019, the hub will be home to an intensive program for developing enterprise-ready cyber companies. Each year, JVP will support 10 cybersecurity startups so they can gain access to the New York market, connect directly with investors and industry purchasers, and access superlative mentorship and advisory services.

Jerusalem Venture Partners is a top-ranked, globally recognized Israeli venture capital firm that has created and invested in over 140 companies in Israel, the US, and Europe and has been at the forefront of the cybersecurity market for years. While initially committed to one floor in the hub’s building in SoHo, JVP decided to occupy the entire six floors of the building as its first American headquarters after receiving significant interest from the Global Cyber Hub announcement.

“Cyberattacks continue to threaten our daily lives, our businesses and institutions, and even our democracy,” said Erel Margalit, PhD, founder and executive chairman of Jerusalem Venture Partners. “Fighting this threat requires global public-private partnerships, and that’s what we’re doing in New York City. We’re building a world-class cybersecurity hub to be a center of gravity for the city’s growing ecosystem and to facilitate the kinds of international expansions and collaboration that will produce great global companies and keep us safe.” Yoav Tzruya, general partner at Jerusalem Venture Partners added, “The next generation of cyber companies need to be vertically oriented, global players, agile, and operating across multiple ecosystems to produce truly impactful solutions. That’s what we’re seeing with our new hub—companies eager to use what they’ve learned in Israel and around the world and building a bridge to the US through New York City’s vibrant and growing cyber community.”

Finally, Cyber NYC is designed to connect investors and innovators to New York City’s robust university ecosystem. Partnering with the tech transfer office of Columbia University, Columbia Technology Ventures, the “Inventors to Founders” program is designed to launch new cybersecurity startups sourced from university campuses that commercialize intellectual property research. The academic inventors of cybersecurity technology will receive training, matching with experienced entrepreneurial talent, and access to growth opportunities within the city’s cyber ecosystem to accelerate innovation and commercialization. Inventors to Founders will also administer an accelerator program for early-stage startups coming out of its partner academic institutions, with access to funding, mentorship networks, and deep university support.

Starting with a consortium that includes Columbia University, Cornell Tech, New York University, and City University of New York, the program will gradually expand to include other competitive research institutions in the region.

In collaboration with NYCEDC, leaders in the cybersecurity industry are making New York their home. With a supportive urban environment, record-level investment in cyber, a large and diverse workforce, and a bustling startup ecosystem, New York City is a natural choice for businesses looking to capitalize on the massive growth opportunity that is cybersecurity.

Join us in scaling the next billion-dollar cybersecurity company here in New York. For more information, visit www.cyber-nyc.com or email us at cybernyc@edc.nyc.