The We Company (WE), also known as WeWork, has filed to raise $1.0 billion in an IPO of its Class A shares, according to an S-1 registration statement.

The firm provides office-space-as-a-service for individuals and companies in hundreds of cities worldwide.

WE has grown sharply but is generating high operating losses and cash burn. The firm has never faced an economic downturn, the odds of which appear to be increasing.

New York-based We was founded in 2010 to re-lease modified office space with additional amenities to individuals and businesses seeking services better tailored to their needs.

Management is headed by co-founder and CEO Adam Neumann, who was previously co-founder of Green Desk and Egg Baby.

Rebekah Neumann is the Chief Brand and Impact Officer and CEO of subsidiary WeGrow. She is the wife of Adam Neumann.

Below is a brief WeWork marketing video

The company says it has ‘over 528 locations in 111 cities across 29 countries… 527,000 memberships represent global enterprises across multiple industries, including 38% of the Global Fortune 500,’ as the map shows below: 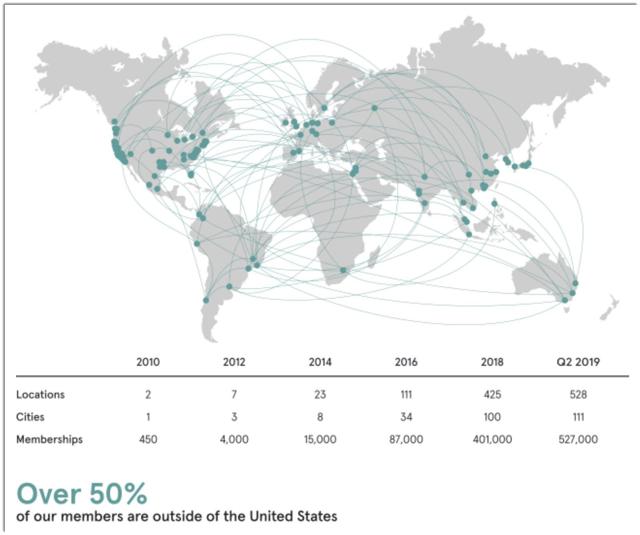 The company obtains customer through online advertising, word of mouth, and direct outreach to larger organizations.

WE seeks to ‘strategically cluster’ its locations within a city in order to efficiently increase its brand awareness as well as generate economies of scale for more efficient operations.

Sales and marketing expenses as a percentage of total revenue have stabilized at 20.8% as revenues have increased, as the figures below indicate:

The sales & marketing efficiency rate, defined as how many dollars of additional new revenue are generated by each dollar of sales & marketing spend in the same period in the previous year, was 5.5x in the most recent six-month period, as shown in the table below:

The firm’s membership net retention rate for the year ended December 1, 2018, was 119%. We don’t know what the actual dollar-based retention rate, so we can’t compare ‘apples to apples’ in terms of that important subscription-based metric.

The global office space market is competitive and highly fragmented.

Furthermore, the co-working space in major cities is fragmented with numerous local competitors.

Demand for office space is highly localized, and given WE’s global coverage in major cities, direct competitors that provide similar services at its scale are not evident at this time.

According to a 2019 coworking market study, the number of co-working spaces worldwide is expected to reach 25,968, an increase of $42 from 2019, as shown in the chart below: 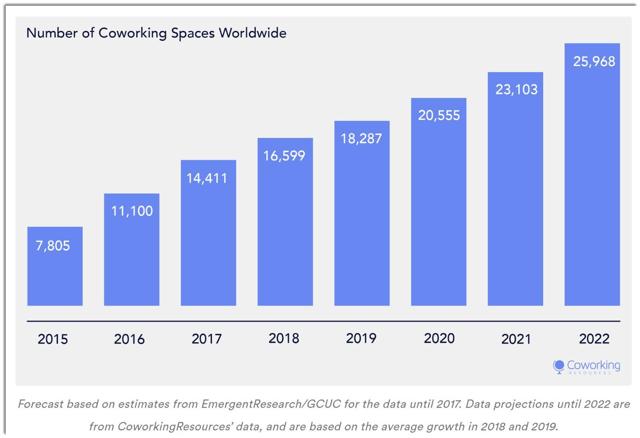 New coworking space formation will account for 65% of the growth, while expansion of existing boutique locations and chains will represent 35% of growth, per the estimate.

Notably, coworking growth per capita is forecasted to be highest in smaller, entrepreneurial countries such as Luxembourg, Singapore, Ireland, and New Zealand.

WE’s recent financial results can be summarized as follows:

Below are relevant financial metrics derived from the firm’s registration statement:

WE intends to raise $1 billion from the sale of Class A shares, although the final figure may differ from this likely placeholder amount.

Management says it will use the net proceeds from the IPO as follows:

Management’s presentation of the company roadshow is not currently available.

WE hopes the public investment capital market will be willing to bankroll its continued losses while providing no details about what it intends to do with the IPO capital.

The company’s financials show a firm that is expanding quickly across major cities worldwide, but generating tremendous operating losses.

Additionally, WE is on track to burn $400 million in cash from operations in 2019, based on its first half results.

Sales and marketing expenses as a percentage of total revenue are relatively stable and average revenue per member dropped slightly in 2018 versus 2017.

The market opportunity for the firm’s approach to creating improved office spaces designed for specific amenities and community appears to be growing significantly, but the company faces diffuse competition due to the fragmented nature of local real estate markets.

WE has an edge over smaller competitors for its enterprise customer base since it can provide a single account for increasingly global enterprises seeking an integrated vendor that can serve office needs over many locales.

WE will be under significant pressure to float its shares at or above the previous $47 billion private market valuation, if only to avoid any possible anti-dilution terms.

Interested prospective investors will need to carefully gauge whether the firm’s proposed valuation is ‘priced for perfection,’ especially in light of softening global economic indicators.

WE has not experienced an economic recession since its founding, and management doesn’t appear to have built the company for a significant margin of error in case of a downturn.

In the event of a recession, its funding costs can’t get much lower, so the firm would need to shutter poorly-performing locations and potentially sharply reduce its growth plans.

Investors should factor in the possibility of a negative economic period ahead and the potentially significant effects on the real estate space-as-a-service firm.

Members of IPO Edge get the latest IPO research, news, and industry analysis. Get started with a free trial!

Disclosure: I/we have no positions in any stocks mentioned, and no plans to initiate any positions within the next 72 hours. I wrote this article myself, and it expresses my own opinions. I am not receiving compensation for it (other than from Seeking Alpha). I have no business relationship with any company whose stock is mentioned in this article.