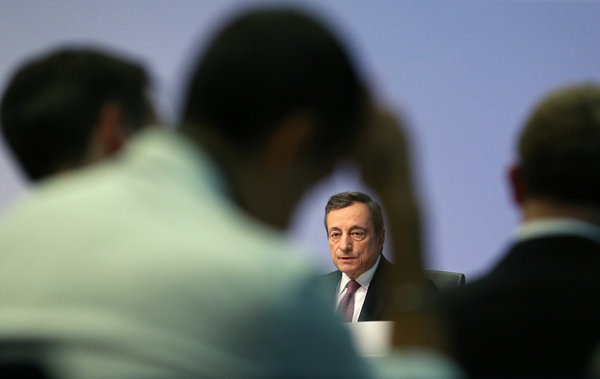 FRANKFURT — The European Central Bank took unexpectedly aggressive steps on Thursday to head off a downturn before it gained momentum, but the bank signaled that it was reaching the limits of what it could do to stimulate the eurozone economy.

The central bank cut a key interest rate and revived a money-printing program, but later issued an unusually strong call for eurozone governments to do more of the economic heavy lifting.

Those countries that can afford it should stimulate growth by increasing public spending, Mario Draghi, the central bank president, said during a news conference.

Asked whether the message to political leaders was that they can’t expect the central bank to come to their rescue forever, Mr. Draghi answered: “Definitely yes.”

The euro slipped against the dollar on Thursday, but Mr. Draghi rejected the idea that currency manipulation was behind the bank’s action.

“We have a mandate, we pursue price stability, and we don’t target exchange rates, period,” he said.

Some prominent economists say that it’s time for the European Central Bank to get more creative. The bank’s balance sheet already includes €2.6 trillion, or about $2.9 trillion, in government and corporate bonds. They were bought with newly created euros to inject money into the financial system and push down interest rates.

Analysts say that the bank has limited scope to buy more government bonds because it already owns such a big chunk of the market.

“As I see it, he has only about €60 billion of sovereigns he can buy,” Carl Weinberg, chief international economist at High Frequency Economics in White Plains, N.Y., said in an email. “That does not support sovereign bond purchases lasting for very long.”

Some economists have begun urging the bank to consider printing money and distributing it directly to citizens.

Among them is Stanley Fischer, former vice chairman of the Fed and Mr. Draghi’s thesis adviser when he was a doctoral student at M.I.T. Mr. Fischer was among the authors of a report published last month by the fund manager BlackRock.

“An unprecedented response is needed when monetary policy is exhausted and fiscal policy alone is not enough,” the report said.

“That response will likely involve ‘going direct,’” the report said. “Going direct means the central bank finding ways to get central bank money directly in the hands of public and private sector spenders.”

The eurozone economy probably needs to get a lot worse before the central bank would consider such an idea, which would be highly contentious. “Giving money to people in whatever form, it’s a fiscal policy task,” Mr. Draghi said Thursday. “It’s not a monetary policy task.”

He added, though, that Ms. Lagarde might reconsider the issue.

Mr. Draghi will preside over one more monetary policy meeting, on Oct. 24, before handing power to Ms. Lagarde.

Fed's Williams: 'We were prepared' for the overnight funding jolt last week
There's a theory that retiring boomers cashing out will cause a 'dark period' for the stock market
WeWork's Adam Neumann offered package worth up to $1.7 billion to step down from board
China could take a 'much harder' line against Hong Kong now that National Day celebrations are over
Category: Business World
Tags: Business News, Business Updates