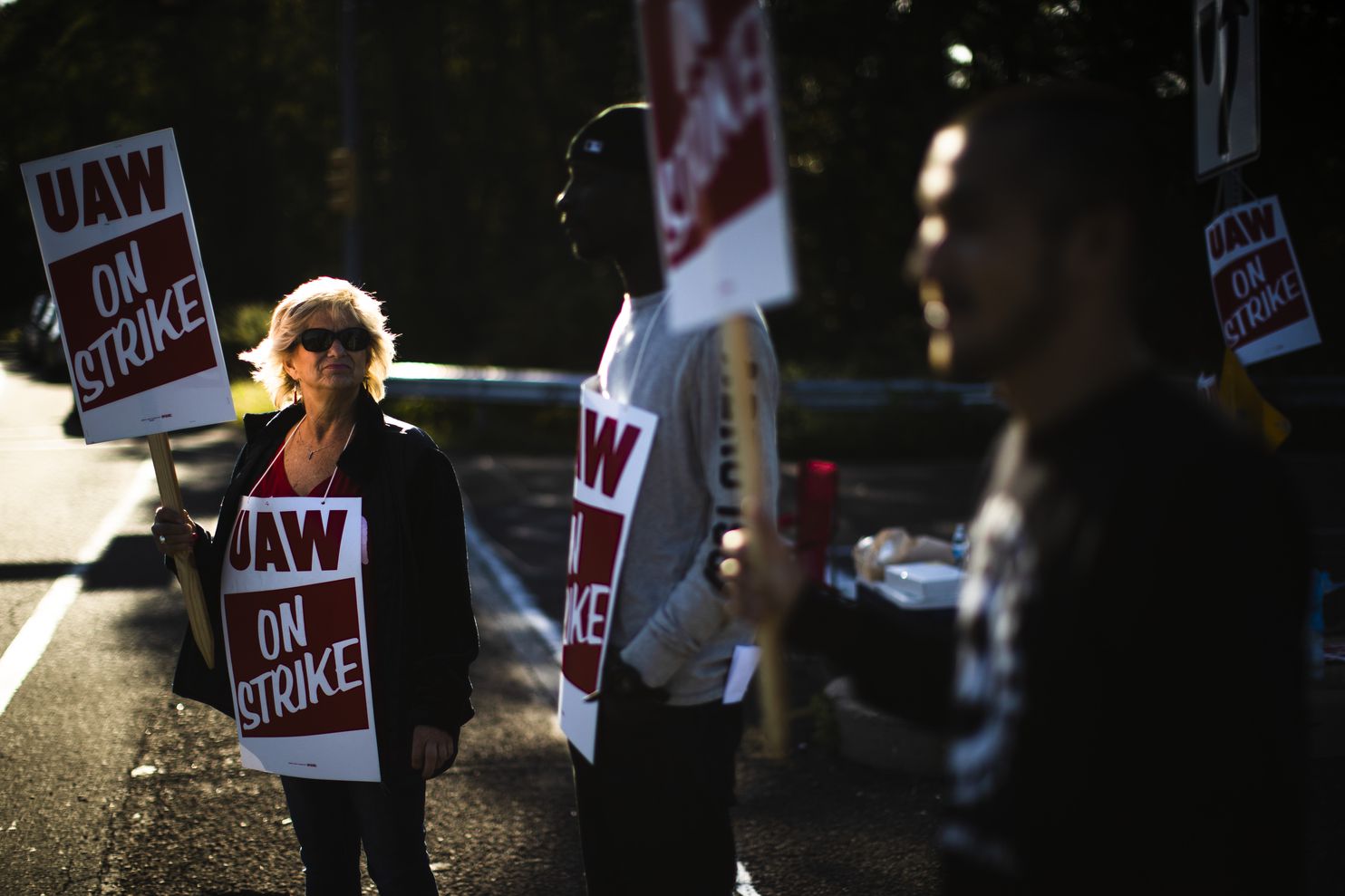 General Motors has dropped health-care plans for tens of thousands of striking workers, a move that underscored tensions between the two sides as negotiations continue two days into the stoppage.

The United Auto Workers, which represents the roughly 49,000 workers whose walkout has effectively halted GM’s production in the United States, released an internal letter Tuesday that said it had been given notice that the company had stopped health-care benefits because of the strike.

The UAW said that it would “provide medical assistance,” or cover employees’ health-care fees under COBRA in the interim from the pool of money it keeps for strikes.

The strike effectively began Monday morning, and there have been few signs of any significant progress in negotiations. On Wednesday, GM dismissed 1,200 workers from an assembly plant in Ontario, Canada, saying the temporary layoffs were the result of parts shortages in the United States because of the strike. The factory had produced full-size pickup trucks.

And the health-care move appeared to signal the potential that the impasse will last much longer than the last stoppage at GM, which lasted two days in 2007.

That’s in part because the current action unfolds in a more charged political dynamic, with an invigorated left wing increasingly focusing on issues surrounding wages and livability amid a broader debate about economic inequality.

At GM, which has enjoyed robust profits as the economy has churned in recent years, workers are clamoring for what they say is a more equitable contract and more job security after years of concessions made during the recession.

GM spokesman David Barnas said the decision to cut workers’ health care was a standard practice during stoppages, likening it to the cessation of worker paychecks. An explainer about strikes on the UAW’s website does note that it typically pays for worker medical plans in such situations.

“We understand strikes are difficult and disruptive to families,” GM said in a statement Barnas distributed. “While on strike, some benefits shift to being funded by the union’s strike fund, and in this case hourly employees are eligible for union-paid COBRA so their health-care benefits can continue.”

Employee dental and vision plans will not be covered during the strike.

Harley Shaiken, a labor expert at the University of California at Berkeley, said that the mechanics of the move were uncommon.

“In the past, what the pattern has been is when the strike begins, the company continues the health care, but the UAW pays for it through its strike fund,” Shaiken said in a phone interview. “This time, going to COBRA so quickly is very unusual.”

The switch means that employees will have to be re-enrolled in health-care coverage when the strike ends. Shaiken said it was possible that the UAW had an understanding with GM about the cessation of the health-care plans.

“They’re sending a message,” he said of GM. “This is a public relations risk. With all the [national] focus on health care and concerns over health care, for the company to be oblivious to this … misses a beat or two, and that could become problematic.”

Lance Compa, a lecturer at Cornell University’s School of Industrial and Labor Relations, said that cutting off workers’ health care was legal but “qualitatively different from halting paychecks.”

“Many companies in a long-standing collective bargaining relationship don’t go there, because they want to maintain a decent working relationship with the union in the long run. They know that the strike will end eventually and they have to get back to normal,” he said. “It signals a very aggressive move to punish workers and their families for exercising the right to strike.”

He noted that the United States’ health-care system, which revolves to a large extent around employment-related health-care plans, was another way in which corporations had leverage over their employees.

“Allowing employers to cut off health insurance puts U.S. labor law’s thumb on the scales giving extra power to employers, and shows again why we need a national health insurance system separate from employment,” he said.

GM workers say they are pushing for a more equitable contract that will guarantee better wages for new hires, stronger health-care benefits and more job security. The car giant has moved to close a handful of production facilities in the United States in recent years despite strong profitability margins.

GM made $8.1 billion in profit after taxes last year but announced the closure of four factories, scuttling thousands of jobs.

GM says it has offered to make $7 billion in investments and create 5,400 jobs, including introducing electric trucks, opening a battery cell manufacturing site and investing in eight existing facilities.

The 49,000 full-time and temporary workers represented by the UAW make up about half of its workforce.

Analysts note that American automakers face higher labor costs than foreign car companies that have opened assembly plants in the United States, none of which are unionized.

Media reports have said that health-care costs form at least part of the contractual dispute between the two sides.

Workers are forgoing their paychecks during the strike, though the UAW will pay them $250 a week from its strike fund. GM could be losing as much as $50 million to $100 million a day from the stoppage, analysts say.

The strike has drawn support from Democratic presidential candidates such as Sen. Bernie Sanders (I-Vt.), Sen. Elizabeth Warren (D-Mass.) and South Bend, Ind., Mayor Pete Buttigieg. President Trump said he was sad to see the strike and hoped for a quick resolution.