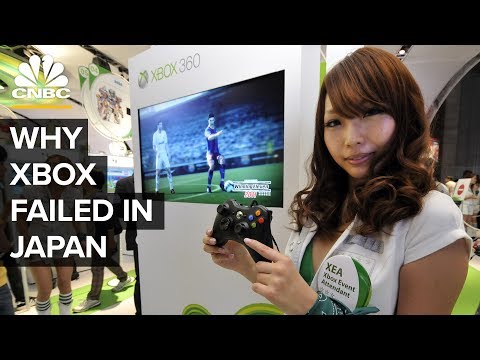 Microsoft’s Xbox consoles have become a global hit. But there’s one market where they don’t work — Japan. Of the 46.9 million Xbox Ones sold worldwide through the second quarter of 2019, just 0.3% of them have been in Japan, according to IDC. Meanwhile, Japanese companies Sony and Nintendo are popular with consumers.

When Microsoft announced it was developing a video game console, the industry was skeptical. In the ’90s, Microsoft was known for its software, not its hardware business.

Almost two decades later, Microsoft’s Xbox has become a popular console, holding its own against Sony and Nintendo.

But there’s one market where the Xbox hasn’t been a hit with consumers — Japan.

When Microsoft released the Xbox in 2001 in the United States, Japan was the gaming juggernaut of the world. It was home to the three big console makers, Nintendo, Sega and Sony, and had the best developers.

Microsoft faced three big challenges launching the Xbox in Japan. It had to convince Japanese developers to make games for Xbox, overcome consumers’ skepticism about the first edition’s bulky design, and make up for lost sales from launching after the holiday period.

Today, Microsoft still struggles to sell consoles in Japan. Of the 46.9 million Xbox Ones sold worldwide through the second quarter of 2019, just 0.3% of them have been in Japan, according to the International Data Corporation.

While Japan is a big market for video games, Dean Takahashi, the lead writer for GamesBeat at VentureBeat, said Microsoft doesn’t rely on Japanese consumers.

“Japan is still down, but they don’t actually need it to make billions of dollars,” Takahashi said.

In a statement to CNBC, Microsoft said Japan is an important part of its global gaming community.

While Japanese consumers prefer Sony’s PlayStation or Nintendo’s Switch, Microsoft’s relationship with its Japanese competitors is changing. Watch this video to learn more about how Microsoft is working with Sony on the future of video gaming.

Why The Xbox Failed In Japan

Interview: Relativity CEO Tim Ellis on 3D printing rocket ships
The Rise And Fall Of Toms
Why Tesla Is Better Positioned To Survive Than Other Automakers
How The Fed Is Trying To Prevent A Financial Crisis
Category: Business News Videos