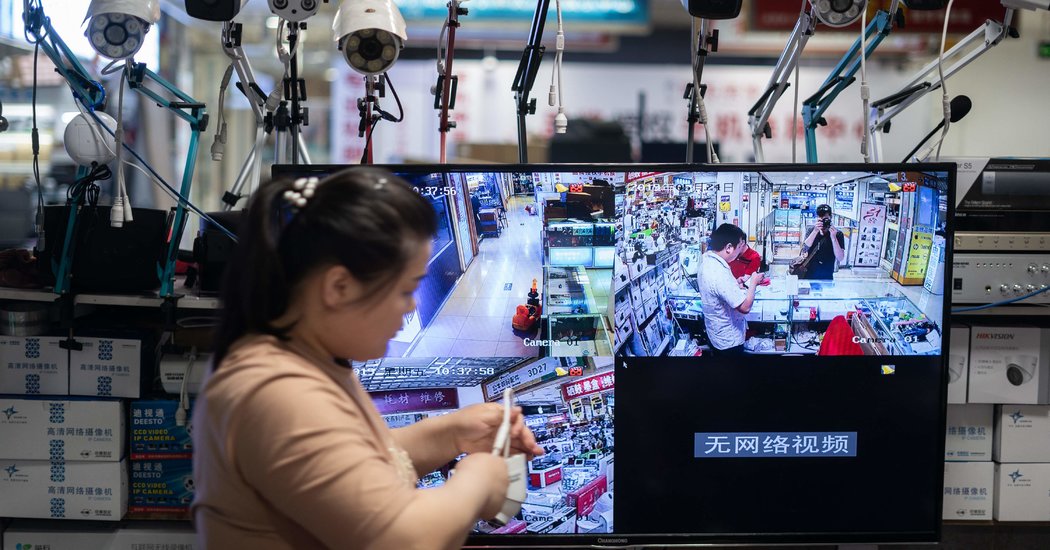 SHANGHAI — The world has largely sat by for nearly two years as China detained more than one million people, mostly Muslims and members of minority ethnic groups, in re-education camps to force them to embrace the Communist Party.

Now, the Trump administration has taken the first public step by a major world government toward punishing Beijing. In doing so, it is opening up a new front in the already worsening relationship between Washington and Beijing: human rights and the dystopian world of digital surveillance.

Trump administration officials on Monday placed eight Chinese companies and a number of police departments on a blacklist that forbids them to buy American-made technology like microchips, software and other vital components. The companies it targeted are at the vanguard of China’s surveillance and artificial intelligence ambitions, with many of them selling increasingly sophisticated systems used by governments to track people.

The White House cited their business in Xinjiang, a region of northwestern China that is home to a largely Muslim minority group known as the Uighurs. The United States government says more than one million ethnic Uighurs and other minorities have been locked in detention camps there.

The administration’s move suggests that President Trump is increasingly willing to listen to the advice of American officials focused on the strategic challenges posed by China and who are concerned about its human rights abuses, even if Mr. Trump himself never seems to pay much attention to those.

The new entrants to the blacklist were announced just days before trade talks were set to begin between American and Chinese officials, likely putting a chill over the negotiations.

More broadly, it signals the White House’s willingness to take aim at China’s technological dreams. China has plowed billions of dollars into companies developing advanced hardware and software to catch up with the United States. Some of the companies added to the list on Monday are among the world’s most valuable artificial-intelligence start-ups.

Much of that technology — including facial recognition and computer vision — can be used to track people. That includes smartphone tracking, voice-pattern identification and systems that track individuals across cities through powerful cameras. Washington officials have grown increasingly worried about China’s ambitions to export its systems elsewhere, including places known for human rights abuses.

“This is an important first step in making some of the companies that have benefited the most from the re-education system in Xinjiang feel the consequences of their actions,” said Darren Byler, an anthropologist at the University of Washington who studies the plight of the Uighurs.

He said the move signaled that abuse of minority groups in Xinjiang “is real and justifies a political and economic response.”

It is also a potentially groundbreaking use of a powerful tool that the American government typically uses against terrorists. The Chinese companies and police departments were placed on what is called an entity list, which forbids them to buy sensitive American exports unless Washington grants American companies specific permission to sell to them.

Use of the entity list over a human rights issue may be a first, said Julian Ku, a professor of constitutional and international law at Hofstra University.

“As far as I know, it was the first time Commerce explicitly cited human rights as a foreign policy interest of the U.S. for purposes of export controls,” he said, referring to the Department of Commerce, which manages the entity lists. “This is not an implausible reading of the regulations, but it is new and has potentially very broad applicability.”

Geng Shuang, a Chinese Foreign Ministry spokesman, said in a briefing on Tuesday that the White House was using human rights as an excuse to punish Chinese companies. Many of the companies offer a wide array of products outside of surveillance, including medical tools that diagnose tumors, automatic translation services and even social media filters that slim the waist.

“This goes against the basic principles of international relations, it interferes in China’s internal affairs and it goes against China’s national security,” he said, adding, “There is no human rights issue in Xinjiang.”

The immediate impact on the Chinese companies is likely to be minimal, since many have stockpiled essential supplies, but they could feel increasing pain if they stay on the blacklist for months or years.

Perhaps more important, it can put a cloud over the companies’ reputation, limiting their sales in the United States or elsewhere and keeping them from hiring the world’s best technology talent.

“The U.S. move today puts up a big roadblock on the road to internationalization,” said Matt Sheehan, a fellow at MacroPolo, the think tank of the Paulson Institute.

“Most global technology companies are setting up labs abroad, partnering with the best universities around the world and looking to recruit top talent from everywhere,” he said. “That all just got a lot harder now that they’re marked with the scarlet letter of the entity list.”

The move follows more than a year of internal debate over how to punish China for its persecution of Muslims in Xinjiang.

Senior officials on the National Security Council and in the State Department have pushed for the use of the entity list to target Chinese companies supplying surveillance technology to the security forces in Xinjiang. They have also urged Mr. Trump to approve Global Magnitsky Act sanctions that would penalize Chinese officials involved in the abuses and bar them from traveling to the United States.

But top American trade negotiators, including Treasury Secretary Steven Mnuchin, have cautioned against policies that would upset trade talks. Mr. Trump has said he wants to reach a trade deal with China.

Until now, other top officials, most notably Vice President Mike Pence and Secretary of State Mike Pompeo, have denounced China’s policies in Xinjiang but not enacted punitive measures. This month, American customs officials blocked products from a Chinese garment maker in Xinjiang, but they had held off on stronger action.

The Chinese companies on the list included major surveillance camera maker Hikvision and the well-funded artificial-intelligence start-ups SenseTime and Megvii.

SenseTime said it set “high ethical standards for AI technologies,” while Megvii said that it required “clients not to weaponize our technology or solutions or use them for illegal purposes.” It added that it had generated no revenue from within Xinjiang in the first half of 2019.

New York Times reporting showed that four of the companies on the list — Yitu, Hikvision, Megvii and SenseTime — helped build systems across China that sought to use facial recognition to automate the detection of Uighurs.

Mr. Trump’s next step could be imposing sanctions on specific Chinese officials working in Xinjiang. Among the officials discussed is Chen Quanguo, a Politburo member who is the party chief in Xinjiang and an architect of the system of internment camps and surveillance.

The blacklist action is a sign that strategic China hawks have become even more influential in the administration in recent weeks.

“This Xinjiang package has been in the works now for months,” said Samm Sacks, a cybersecurity policy fellow at New America, a think tank. “So the fact that it comes out now just ahead of the next round of trade talks sends a signal from those in the administration who want no deal.”

“So far Beijing has been quite measured in its response to the U.S. government,” she said. “That probably is over.”