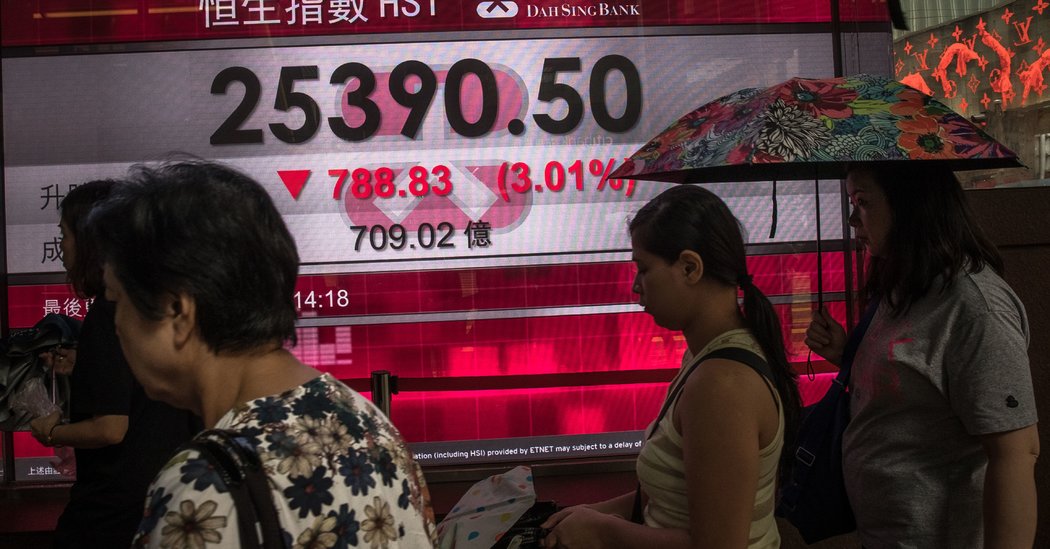 WASHINGTON — American and Chinese officials met for the 13th round of trade negotiations on Thursday amid growing expectations of a limited deal that could ease tensions and address some of President Trump’s concerns about China’s economic practices.

“We had a very, very good negotiation with China,” Mr. Trump said on Thursday afternoon, adding that the two sides would continue discussions on Friday. “It’s going very well.”

But administration officials are separately weighing options that could inflict additional economic pain on Beijing as the United States continues looking for ways to force China to change longstanding rules that have put American companies at a disadvantage.

The ideas under consideration would move the White House’s negotiating tool of choice beyond tariffs toward limiting China’s access to American capital markets and imposing greater scrutiny on its companies, according to people familiar with the discussions.

Administration officials, including members of the National Security Council, have begun pressing the Securities and Exchange Commission to increase scrutiny of Chinese firms. They are also looking for ways to reduce the exposure of American retirement funds to certain Chinese companies.

Many of the efforts have been proceeding independently from the trade talks and are fueled by longer-term considerations of China’s economic and security threats. Some White House advisers now view the escalation options as an additional lever to force China to make the kinds of deep economic concessions that have so far proved elusive in the talks, which have dragged on for more than a year.

On Thursday, Treasury Secretary Steven Mnuchin and Robert Lighthizer, Mr. Trump’s top trade negotiator, greeted the Chinese vice premier, Liu He, on the steps of the Office of the United States Trade Representative. The meetings stretched into the afternoon, and at one point a black S.U.V. was seen delivering large brown bags from Clyde’s, a Washington restaurant, for a working lunch.

“Big day of negotiations with China,” Mr. Trump wrote on Twitter on Thursday morning. “They want to make a deal, but do I? I meet with the Vice Premier tomorrow at The White House.”

A U.S. Chamber of Commerce official briefed by both negotiating teams said that the United States and China could announce a limited trade agreement this week that would prevent Mr. Trump’s planned tariff increase from going into effect this month and set rules around how China manages its currency.

Myron Brilliant, the executive vice president and head of international affairs at the Chamber of Commerce, said that a more comprehensive pact could still be announced but that the scope of the deal would depend on what Chinese negotiators offered. The Trump administration could also contemplate removing the threat of additional tariffs that are scheduled to be imposed in December or roll back some of the tariffs it has already levied on more than $360 billion of Chinese goods based on what the Chinese negotiating team offers, he said.

There have been some recent signs of accommodation between the two countries in recent weeks. China has resumed purchases of American agricultural goods. And in what is likely to be viewed as a gesture of good will by the Chinese, the Trump administration plans to approve licenses soon that will allow some companies to sell nonsensitive goods to the Chinese telecom provider Huawei, which has been blacklisted from buying American products.

But China has resisted many of the administration’s demands to make more transformative changes to the way it runs its economy. Chinese officials appear unlikely to agree to the administration’s longstanding demands that Beijing limit its subsidies to Chinese firms, change its policies surrounding the treatment of data or make other structural changes, people familiar with the negotiations said.

The potential for such a limited agreement has fueled private deliberations within the White House on options for escalating economic pressure on China.

Officials have held meetings in recent weeks to consider options if the current round of negotiations fails to address the administration’s primary concerns. Mr. Trump’s top economic advisers have publicly played down the discussions, which have centered on tightening scrutiny of Chinese companies listed on American stock exchanges and limiting the direct exposure of government-run retirement funds to China.

Larry Kudlow, the director of the National Economic Council, acknowledged on Tuesday that the administration was looking for ways to protect Americans who were investing in Chinese companies.

“We’ve opened up a study group to take a look at it,” Mr. Kudlow said on the Fox Business Network.

But the options under consideration go further than that. According to a memo circulated within the White House and reviewed by The New York Times, the administration is studying a menu of actions that, if carried out, would most likely rattle the Chinese government.

The memo was drafted by Michael Pillsbury, a China scholar at the Hudson Institute and an outside adviser to the White House. It proposes holding Chinese companies and their employees criminally liable for financial disclosure violations, broadening the criteria that could get prominent Chinese companies blacklisted in the United States and blocking public and private pension funds and university endowments from certain Chinese investments.

Other options go beyond financial scrutiny of Chinese companies. The memo describes the possibility of fostering deeper ties between the United States and Taiwan and disrupting the flow of capital between Hong Kong and mainland China if it is determined that Hong Kong’s autonomy is not being respected.

It also lays out legislation in Congress, which Mr. Trump has yet to endorse, that would impose sanctions on China for activity in contested areas of the South China Sea and crack down on Chinese-funded Confucius Institutes at American universities.

Mr. Pillsbury declined to comment on his conversations with the White House but acknowledged that he had been analyzing such possibilities for a coming study on China strategy for the Hudson Institute.

“It appears that tariffs alone are not enough, but we also need to meet some of the Chinese demands to get the kind of deal the president wants,” Mr. Pillsbury said.

Mr. Trump’s tariffs have already pushed some companies to move their operations out of China. But the raft of new investment restrictions and export controls that the administration is mulling would further sever supply chains and discourage financial integration between the countries, potentially to the detriment of financial markets.

On Monday, the White House clamped down on Chinese firms it accused of human rights violations by adding eight companies and 20 government organizations to an entity list that will prevent them from buying American products. On Tuesday, the State Department announced visa restrictions for Chinese officials allegedly involved in the detention and abuse of Muslim minorities.

An array of initiatives related to American capital markets and investments made by retirement funds in Chinese entities are also under consideration.

The most advanced discussions have centered on the Thrift Savings Plan, the retirement plan for federal employees and the military. As of next year, that plan, which holds nearly $50 billion in assets, is expected to begin investing in an index fund that includes more Chinese and Russian companies, as part of an effort to diversify its exposure.

The index fund includes companies that the United States government has imposed sanctions on — including Hangzhou Hikvision Digital Technology, which was among the companies blacklisted on Monday. It also includes AviChina Industry & Technology, an affiliate of China’s major military aircraft and weapons manufacturer; ZTE, which was hit with sanctions for providing technology to North Korea and Iran; and several Russian companies that the Treasury Department’s Office of Foreign Assets Control has put under sanctions.

Officials have also been discussing efforts to close loopholes that give Chinese companies access to American capital markets with less stringent disclosure requirements than American firms or those from other countries.

Chinese law requires the records of companies based in China to be kept there, and restricts the kind of documentation that auditors can transfer out of the country. The rules mean that hundreds of Chinese firms, with a collective market capitalization of more than $1 trillion, have received looser oversight than companies in other jurisdictions, according to the Securities and Exchange Commission.

A bipartisan group of senators has introduced legislation that would force Chinese companies to comply with S.E.C. disclosure regulations or be delisted from American exchanges in three years. White House officials have debated throwing their support behind the bill, but several officials, including Mr. Kudlow and Mr. Mnuchin, have opposed delisting as a draconian option that could throw American stock markets into turmoil.

“Delisting is not on the table,” Mr. Kudlow told reporters on Monday. He said the administration was responding to complaints to the commission about a lack of transparency and compliance, “but we’re very early in our deliberations.”

Elizabeth Economy, the director for Asia studies at the Council on Foreign Relations, said that addressing the lack of compliance among Chinese companies was “overdue” but that a solution would ideally be negotiated between Chinese companies and the S.E.C.

“Nobody benefits from a mass delisting of Chinese companies on U.S. stock exchanges,” Ms. Economy said.