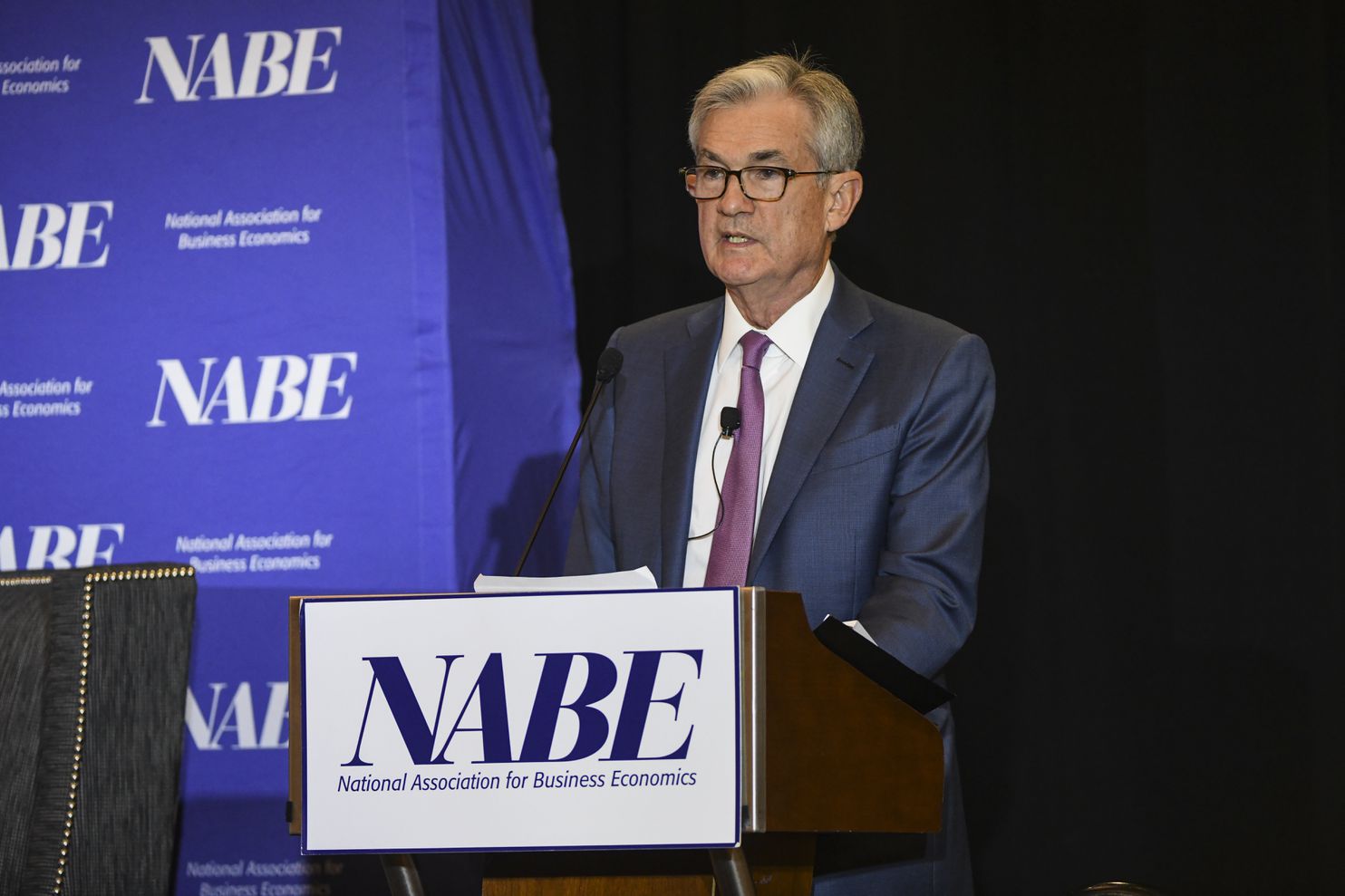 Jerome Powell, chairman of the U.S. Federal Reserve, speaks during the NABE annual meeting in Denver, Colorado, on Tuesday, Oct. 8, 2019. Powell said the central bank will resume purchases of Treasury securities in an effort to avoid a repeat of recent turmoil in money markets. (Daniel Brenner/Bloomberg).
October 8 at 4:50 PM

“My colleagues and I will soon announce measures to add to the supply of reserves over time,” Powell said at the National Association of Business Economics meeting in Denver, Colorado. “This is not QE.”

President Trump wants the Fed boost the economy ahead of the 2020 election with lower interest rates and big purchases of Treasury bonds, an action known as “quantitative easing,” or QE. He has pressed Powell and the Fed to make these changes for months, but Powell has long insisted that he will not change course based on political pressure.

The Fed chair did not specify the exact size of the new asset purchase program, but he said it would not be a resurrection of what they did after the recession 10 years ago.

“I want to emphasize that growth of our balance sheet for reserve management purposes should in no way be confused with the large-scale asset purchase programs that we deployed after the financial crisis,” Powell said.

In an effort to pump more money into the financial system, the Fed went from holding less than $1 trillion in assets in 2007 to $4.5 trillion in 2015. The Fed has gradually trimmed its holdings back under $4 trillion as the economy has improved, but that action has shrunk the level of reserves available to banks.

There was alarm on Wall Street last month when there did not appear to be enough reserves in the system and the overnight borrowing rates that banks use to ensure they have enough capital on hand spiked to levels not seen since the financial crisis.

The Federal Reserve Bank of New York took swift action to pump additional reserves into the system for several days, but many analysts said the Fed needed a more permanent fix. Powell’s announcement Tuesday was a widely anticipated move that is meant to prevent a repeat of what occurred in September. The final details should be announced at the Fed’s next meeting and press conference on October 30.

Powell stressed that the Fed’s goal is to keep the economy on solid footing, not to give it a sugar high.

“I balk at the idea that we’re running the economy hot, this feels very sustainable,” Powell.

His remarks come as the U.S. manufacturing sector struggles to get out of a recession, and many economists have been downgrading their economic growth forecasts for next year to below 2 percent.

Powell left the door open to additional rate cuts to protect the U.S. economy from weak growth abroad and Trump’s trade war, but he did not promise lower rates.

Wall Street is pricing in nearly an 85 percent chance of a rate cut in October. The expectation of a rate cut this month jumped after Powell’s remarks.

Trump faces crucial decision on China as both economies strain