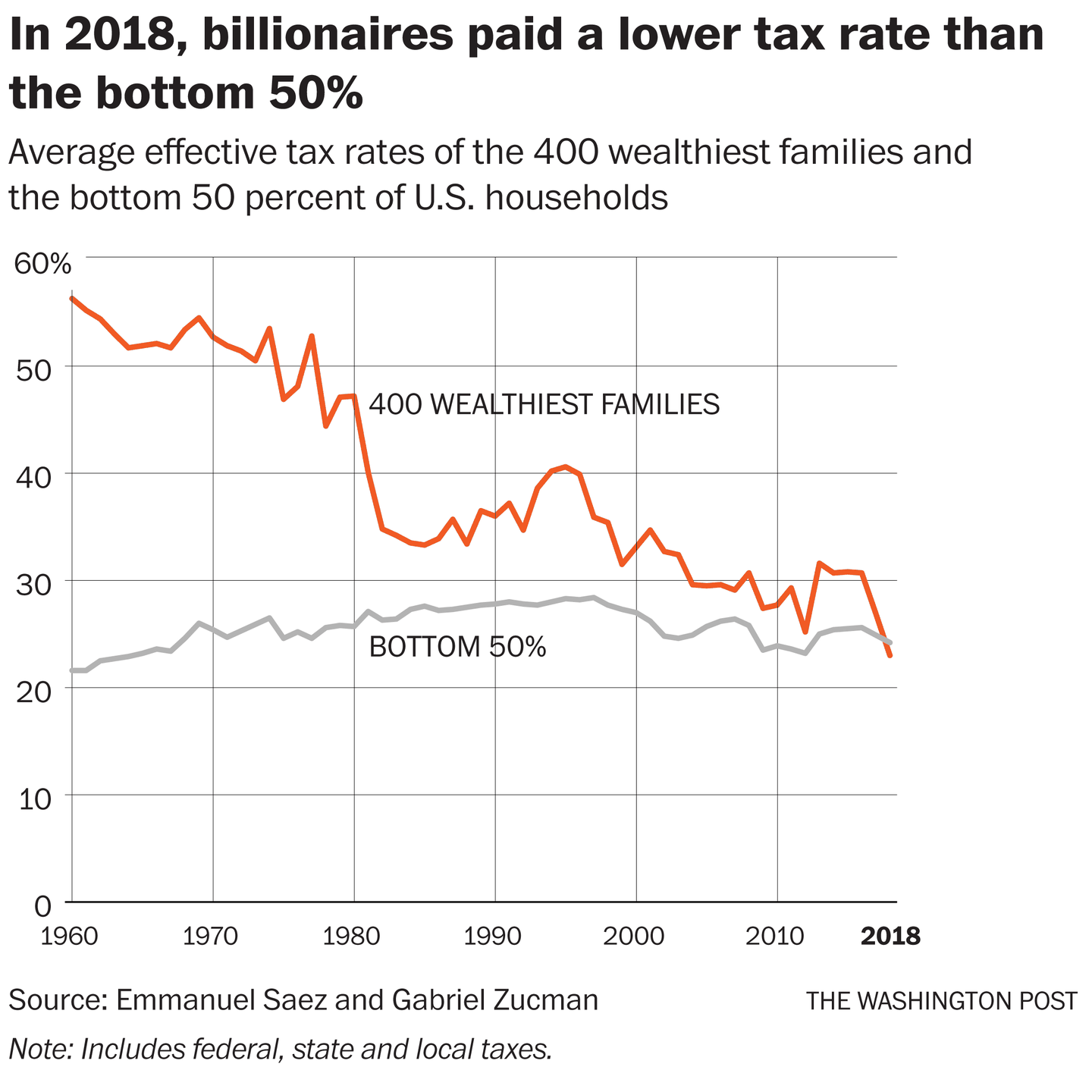 The analysis differs from many other published estimates of tax burdens by encompassing the totality of taxes Americans pay: not just federal income taxes but also corporate taxes, as well as taxes paid at the state and local levels. It also includes the burden of about $250 billion of what Saez and Zucman call “indirect taxes,” such as licenses for motor vehicles and businesses.

The analysis, which was the subject of a column in the New York Times on Monday, is also notable for the detailed breakdown of the tax burden of not just the top 1 percent but also the top 0.1 percent, the top 0.01 percent and the 400 richest households.

But the tipping point came in 2017, with the passage of the Tax Cuts and Jobs Act. That bill, championed by President Trump and then-House Speaker Paul D. Ryan, was a windfall for the wealthy: It lowered the top income tax bracket and slashed the corporate tax rate.

By 2018, according to Saez and Zucman, the rich were already enjoying the fruits of that legislation: The average effective tax rate paid by the top 0.1 percent of households dropped by 2.5 percentage points. The benefits the bill’s supporters promised — higher rates of growth and business investment and a shrinking deficit — have largely failed to materialize.

Not all economists accept Saez and Zucman’s analysis. It is based in part on their previous work, along with French economist Thomas Piketty, on the distribution of wealth and income in American society. Other economists have generated estimates of that distribution that show smaller disparities between the country’s haves and have-nots. Saez, Zucman and Piketty have defended their research and maintain that their methods are the most accurate.

On the question of tax burdens, Jason Furman, an economics professor at Harvard who chaired the White House Council of Economic Advisers under President Barack Obama, noted that Saez and Zucman did not include refundable tax credits, such as the earned-income tax credit (EITC), in their analysis.

The credit, which is intended to encourage low-income families to work, “is part of the tax code,” Furman said. A person who paid $1,000 in federal income taxes and then received a $1,500 credit would have a total federal tax burden of -$500, but Furman said that under Saez and Zucman’s analysis, that person would instead show a burden of $0. That result would make total tax burdens at the lower end of the income spectrum appear higher than they are.

“The best estimates indicate that the tax system is progressive — with the rich paying a higher tax rate than everyone else,” Furman said.

Zucman countered that his and Saez’s analysis considers the EITC and other credits like it as transfers of income, akin to food stamps or jobless benefits, rather than tax provisions.

“If you start counting some transfers as negative taxes, it is not clear where to stop,” he said via email. “Do you treat the EITC as a negative tax? veterans’ benefits? medicaid? defense spending?… There’s no clear line and the results become arbitrary.”

There is general agreement among economists, however, that the tax burden of the rich has fallen considerably in recent decades.

“The rich definitely pay less in taxes than they did in the past and less than they should,” Furman said.

The bulk of Saez and Zucman’s new book explores how that happened, and how the trend might be reversed.