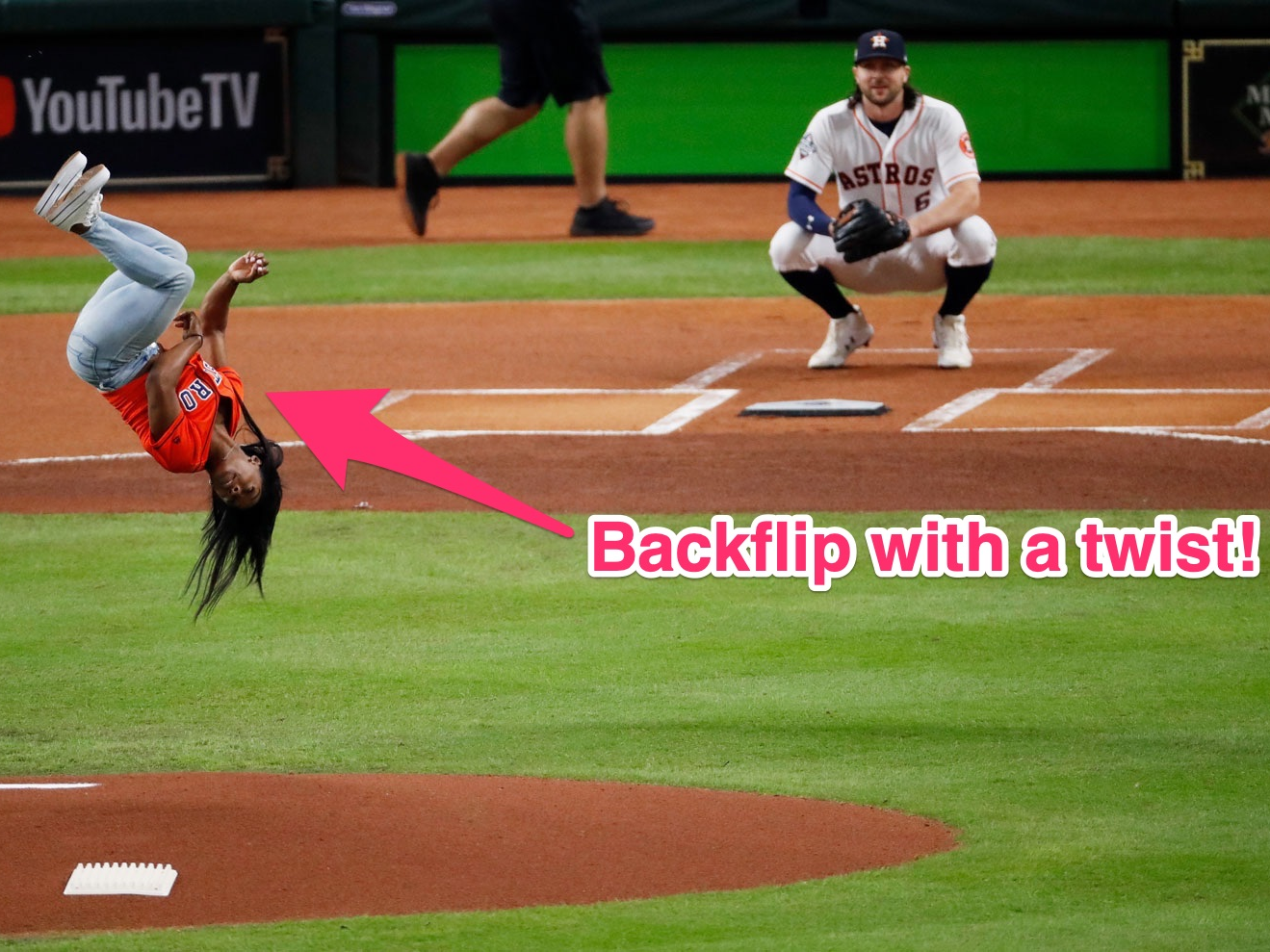 Home » News, Insights & Trends » Business » Simone Biles threw the first pitch for Game 2 of the World Series as only Simone Biles could

Simone Biles threw the first pitch at Game 2 of the World Series, and she did it as only Simone Biles could.

The four-time Olympic gold medalist and 25-time gymnastics world championships medalist stepped to the mound and pulled off a backflip with a twist before firing off the ceremonial first pitch.

The gymnastics wunderkind, who spent the majority of her childhood living with her grandparents in suburban Houston, donned an orange Houston Astros jersey with her last name and the number 19 on the back. But her support for the home team wasn’t enough to push the Astros past the Washington Nationals, who racked up four runs on Houston ace Justin Verlander en route to a 12-3 win.

Biles is fresh off of a dominant showing at the gymnastics world championships in Stuttgart, Germany. The 22-year-old added five gold medals to her resume to become the most decorated athlete in the history of the sport, male or female. With a definitive gold-medal performance on the balance beam, Biles broke the record of 23 total medals at worlds, which Vitaly Scherbo of the Soviet Union and Belarus set a year before the 4-foot-8 powerhouse was born.

It’s no surprise that Biles stole the show at Minute Maid Park by pulling a gravity-defying trick out of her back pocket. In competition, she consistently nails skills so technically difficult and beyond the abilities of her competitors — or any gymnast ever, for that matter — that they’ve been named in her honor. It’s why she’s accumulated a whopping 19 world championship gold medals over the course of her career and earned acclaim as one of, if not the, most dominant athlete alive.

Read more: Simone Biles is the most dominant athlete on the planet, and now she’s primed to become the most accomplished Olympian of all time

The Astros could take a lesson in winning from their hometown gymnastics hero, as they trail the Nationals zero games to two in the World Series thus far despite owning the league’s best regular-season record and entering the series as heavy favorites to hoist the Commissioner’s Trophy.

The Houston front office has been embroiled in controversy as of late, as Sports Illustrated writer Stephanie Apstein accused assistant GM Brandon Taubman of taunting female journalists during the team’s clubhouse ALCS victory celebration. Apstein and two other journalists allege that Taubman aggressively lauded closer Roberto Osuna, who was charged with domestic violence last year, despite a mediocre showing on the diamond earlier that evening.