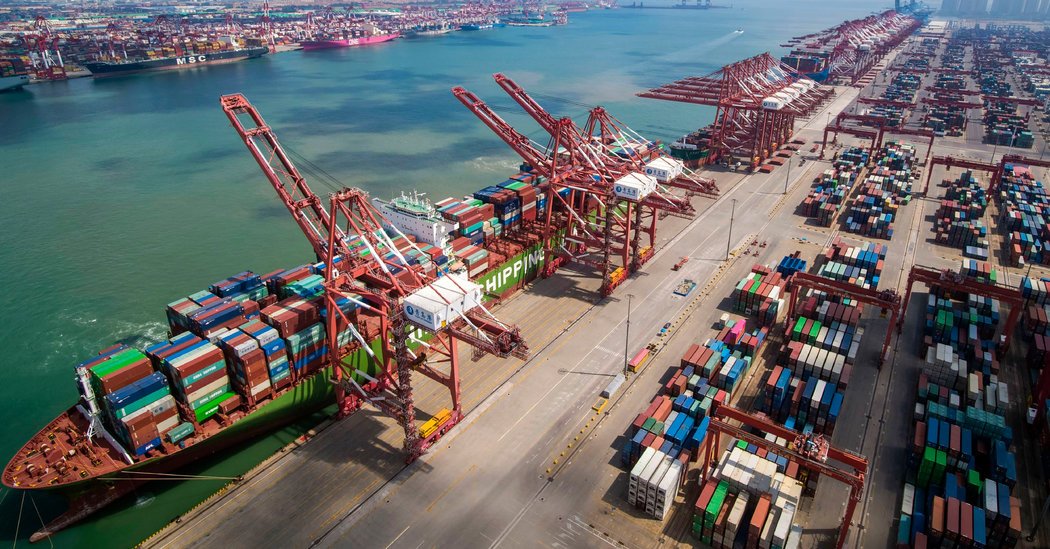 SHANGHAI — The Chinese government on Thursday said Beijing and the Trump administration had agreed to remove some tariffs as part of any deal reached between the two sides, sending markets soaring as investors grew more optimistic that the 19-month trade war could soon be resolved.

But Beijing, which has stayed fairly mum about the state of negotiations, also hardened its stance by publicly voicing its insistence that a trade deal could not take place without each side canceling at least some tariffs.

Gao Feng, a spokesman for China’s Commerce Ministry, said at his weekly news conference in Beijing that China is insisting that any deal include tariff reductions and that the United States had agreed to remove tariffs as part of an agreement.

“In the past two weeks, the leaders of the two sides have conducted a serious and constructive discussion on properly addressing the concerns of both sides, and agreed to cancel the tariffs by stages in accordance with the development of the agreement,” he said.

Mr. Gao did not specify what tariffs might be dropped, or when.

The United States has not confirmed that statement but the Trump administration has been considering rolling back a portion of the tariffs if China agrees to certain concessions. And pressure is growing on President Trump both politically and economically to reach a deal and reduce, if not remove, the taxes he has imposed on $360 billion worth of Chinese goods.

Markets — a favorite economic barometer for Mr. Trump — are increasingly optimistic about the chances for a deal and investors were further buoyed by China’s comments on Thursday. On Wall Street, the S&P 500 rose more than a half a percentage point in early trading on Thursday. Shares of companies with close ties to China’s vast manufacturing base, such as semiconductor manufacturers and retailers, rose.

The rising stock market has attracted Mr. Trump’s attention, with the president routinely taking credit for the increase. He did so again in a tweet on Thursday, writing “Stock market up big today. A New Record. Enjoy!”

American officials have so far declined to specify what, if any, portion of the tariffs on $360 billion worth of Chinese goods they might roll back or whether Mr. Trump will abandon plans to impose another tranche, scheduled for December.

Trump administration officials have been considering lifting the latest tranche of tariffs levied on Sept. 1 on more than $100 billion of Chinese goods, assuming China agrees to make changes to its economic practices.

Those tariffs, which include household products like electronics, are weighing more heavily on American consumers than the initial rounds, which were more focused on technology and manufacturing industries.

The trade war’s toll continues to show up in economic data, with tariffs hurting growth in agricultural and manufacturing states. New figures released by the Commerce Department on Thursday showed that while the United States economy continues to grow, it is particularly sluggish in the Midwest, where farmers have faced fierce retaliation from China.

In the second quarter of this year, which ran from April to June, gross domestic product rose by an annual rate of just 1.1 percent in Wisconsin, Michigan, Iowa, Illinois and Georgia. G.D.P. grew by just 1 percent in Indiana and Kentucky.

Some officials, including top trade negotiator Robert Lighthizer, argued against the imposition of the Sept. 1 tariffs in the first place, and have not been opposed to trading them in return for significant concessions from China, people familiar with their deliberations say. Reductions of the rate of other tariff tranches have also been under discussion.

American officials have emphasized that any moves depend on China taking more aggressive action to protect American intellectual property, and that Mr. Trump will make the final determination.

From a longer-term perspective, American officials have also discussed the deal with China as a series of agreements, each one of which would be associated with some degree of tariff removal. But how many of the tariffs would be removed, and in return for what concessions, remain big outstanding questions.

The United States Trade Representative and the White House did not respond to requests for comment. The Treasury Department declined to comment.

China will insist that any deal include canceling some tariffs, Mr. Gao said Thursday.

“If China and the United States reach the first phase agreement, according to the content of the agreement both sides should cancel added tariffs at the same time with the same proportion,” he said. “This is an important condition for reaching an agreement.”

Mr. Gao did not say whether it would be enough for Mr. Trump to abandon tariffs he had threatened to impose so as to pressure China into reaching a deal.

Previous plans for Mr. Xi and Mr. Trump to conclude a deal on the sidelines of the Asia-Pacific Economic Cooperation summit meeting in Chile in mid-November were thrown into disarray when the Chilean government canceled the meeting because of street protests.

It is still unclear where and when a signing ceremony would take place. Mr. Trump has expressed a preference for a signing in the United States, but locations in Europe and elsewhere have also been considered. Administration officials say that talks are still proceeding under roughly the original timeline, though the signing could be delayed somewhat.

The trade war between the world’s two biggest economies has been taking an increasing toll on both sides. Since the start of the trade war, the United States has imposed tariffs on more than $360 billion a year worth of Chinese products, while China has placed tariffs on roughly $90 billion of American goods. American tariffs now cover more than two-thirds of the products it imports from China, while Chinese tariffs cover 58 percent of China’s imports from the United States, according to tracking by Chad Bown, a senior fellow at the Peterson Institute of Economics.

The trade war has contributed to a slowdown in China’s economic growth, while economists have increasingly warned of the impact on the United States.

Mr. Gao’s public demand for the cancellation of tariffs marked a subtle shift from his previous comments, which were somewhat less specific on what China required to reach any interim agreements.

The news conference on Thursday represented the first official comments on the trade war since the conclusion a week ago of the first meeting in 20 months of the Chinese Communist Party’s Central Committee, a group of senior leaders. In the past, Beijing’s position has shifted away from compromise after a broader array of Communist Party officials were briefed on progress in the trade talks.

The United States and China were close to a deal in early May. But when the draft agreement was broadly distributed within the Chinese leadership, its contents sparked worries about the extent of China’s concessions. China’s trade negotiators quickly demanded extensive changes in the agreement.

Communist Party officials based outside of Beijing have a history of skepticism toward compromises with the United States on trade. Chen Deming, a Chinese commerce minister who was perceived by some midlevel officials as too conciliatory, unexpectedly lost his seat on the Central Committee in voting at the Communist Party Congress in 2012.

Chinese officials last month had also pursued a compromise so as to resume buying American farm goods, which China needs after a devastating outbreak of African swine fever has killed a large share of the country’s pigs, the country’s main source of protein. Some purchases have resumed following the compromise, leaving the Chinese side free to focus on the details of an accord.

Vice Premier Liu He, China’s chief negotiator in the trade talks with the United States, had said in May that there would be no deal without a complete elimination of American tariffs. Mr. Gao’s remarks on Thursday represented a refinement of that stance, as he said that there could be partial deals along the way as long as they also canceled some tariffs as well.

The full elimination of new tariffs is still needed for the complete resolution of the trade dispute, Mr. Gao added.

“Attitude of the Chinese side is clear that the two sides must simultaneously, proportionally remove the existing additional tariffs in order to reach phase 1 deal,” Hu Xijin, the editor of the Global Times who has become a prominent voice in the trade war, wrote on Twitter Thursday morning.

“This is also a realistic way to de-escalate the trade war. Hope it’s also attitude of the US side,” he added.