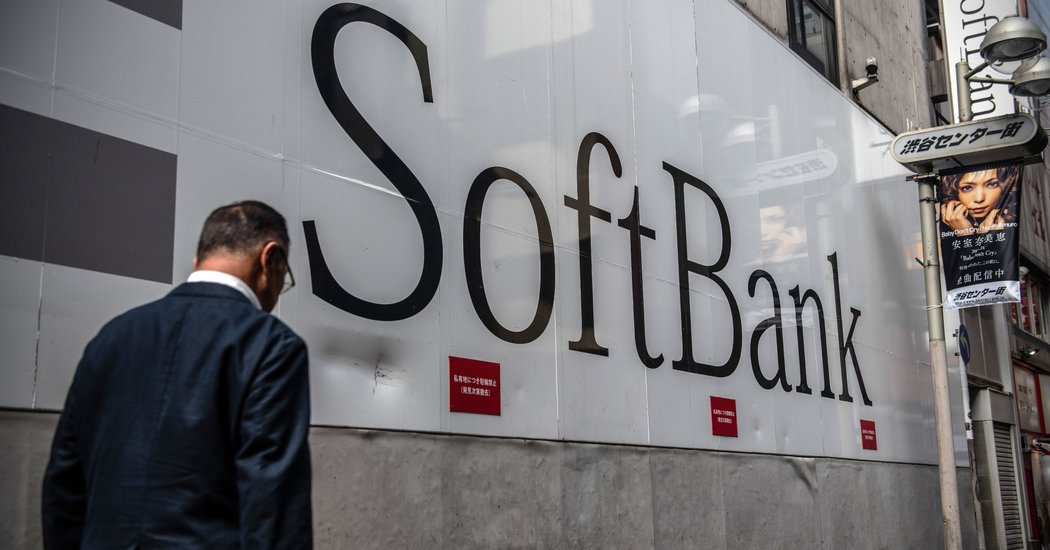 TOKYO — SoftBank Group of Japan on Wednesday said it took a multibillion-dollar write-down related to its stakes in WeWork and Uber, two flashy technology companies that have become the poster children for the excesses of start-up culture.

SoftBank Group is the world’s largest tech investor, and it has used its $100 billion Vision Fund — backed with its own money as well as major stakes from Saudi Arabia’s Public Investment Fund and others — to become a kingmaker in the space by placing major bets on companies it believes have the potential to dominate entire industries.

But the company, and its chief executive, Masayoshi Son, have come under increasing pressure to rein in their stable of potential unicorns following the spectacular implosion of the initial public offering of WeWork, the tech-adjacent American real estate company, in late September.

On Wednesday, SoftBank said its profits for the six months that ended in September totaled 421 billion yen, or nearly $3.9 billion, about half the level of the same period a year ago. The figures imply SoftBank lost more than $6.4 billion in the most recent three-month period.

SoftBank cited a nearly $4.6 billion write-down in the value of its investment in WeWork, plus write-downs in other investments, including Uber, the American ride-hailing company.

But WeWork’s fall had the biggest impact on the Japanese company’s results. WeWork’s $47 billion valuation plummeted virtually overnight after its effort to sell shares to the public revealed deep governance issues, including questionable financial arrangements involving Adam Neumann, its leader and founder. SoftBank now values WeWork at $7.8 billion. Mr. Neumann resigned as the company’s chief executive at the end of September.

SoftBank Group bet big on Mr. Neumann’s vision even as cracks had begun to appear. While its partners in Vision Fund balked at throwing more money at the loss-making WeWork, Mr. Son’s company continued pouring funds into the venture, eventually investing $10.5 billion in the tech firm ahead of its planned offering.

The meltdown has forced SoftBank Group to pump an additional $9.5 billion into the company, leaving it with an 80 percent stake but no majority voting rights. Mr. Neumann walked away with more than a billion-dollar payout.

The WeWork fiasco has increased scrutiny of Mr. Son’s role in shaping the Vision Fund’s investment portfolio. The notoriously exuberant founder is famous for making snap decisions about companies based on intuition as much as overall strategy.

The missteps at WeWork have shaken investors’ confidence in Mr. Son, according to Mitsunobu Tsuruo, an analyst at Citigroup Global Markets Japan.

“He’s supposed to be a good judge for picking winning entrepreneurs, but Mr. Neumann was not the case,” he said, adding that Mr. Son would need to convince his shareholders that their interests will not be compromised by Softbank’s exposure to WeWork.

In some cases, Mr. Son’s bets have paid off spectacularly. An early gamble on Alibaba, the Chinese e-commerce company, grew to more than $100 billion. But other investments have not fared as well. Large stakes in Uber and Slack have begun to look more nearsighted than visionary as their share prices have fallen in the months following their public offerings.

WeWork’s collapse comes as Mr. Son is trying to raise funds for a second $100 billion-plus fund aimed at making investments in artificial intelligence, which SoftBank announced in July. The company planned to finance the fund with $38 billion of its own money and said it expected backing from some of the tech industry’s top names, including Apple and Microsoft, as well as several major Japanese financial institutions.

At the time, it seemed that money would likely finance a strategy similar to the one Mr. Son has pursued with the first fund: pumping so much money into his chosen companies that they overwhelm their rivals with their sheer financial bulk, allowing them to establish near monopolies in key industries.

Critics of the strategy say it has undermined financial discipline at the companies that benefit from the fund’s largess, and the experience of companies like Uber — which spent billions on buying market share but has yet to turn a profit — has given investors second thoughts about that model.