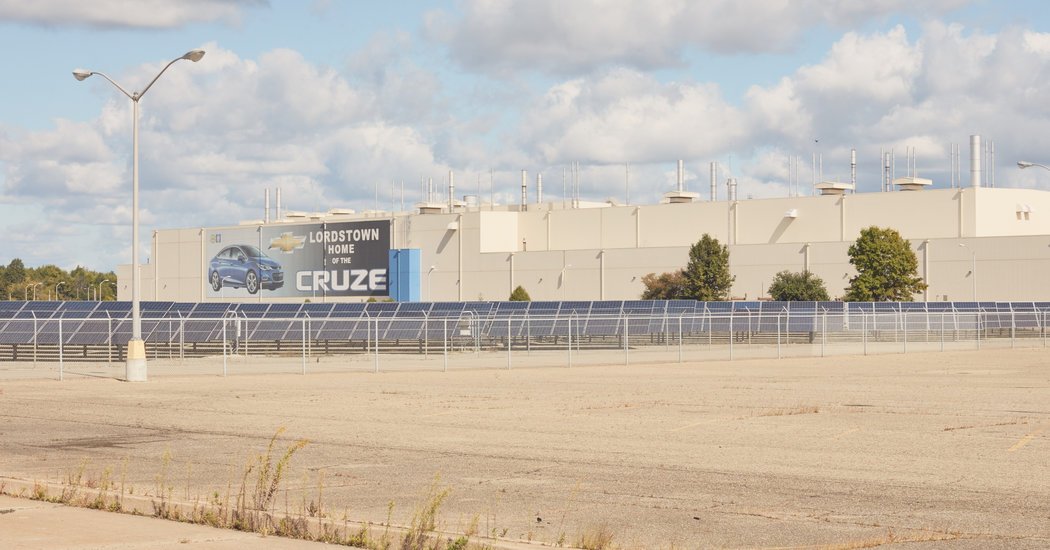 General Motors has sold its factory in Lordstown, Ohio, to a company that says it will make electric pickup trucks with union labor at wages comparable to those of the Detroit automakers.

The price was not disclosed.

The announcement on Thursday came less than two weeks after members of the United Automobile Workers approved a new contract with G.M., ending a strike in which the future of the factory, idled this year, was a central issue.

The buyer is Lordstown Motors, a start-up that says it plans to hire some 400 workers next year and start production of an electric pickup designed for commercial fleets.

Steve Burns, the founder of Lordstown Motors, said the company would give preference in hiring to the plant’s former G.M. workers.

“We think it is appropriate that it is union,” Mr. Burns said in an interview. “Our goal is to hire those folks first who have experience and are still in Lordstown.”

Lordstown Motors expects to begin hiring workers next fall and start production by the end of 2020, Mr. Burns said. Workers will probably earn the top U.A.W. wage of about $31 an hour, he added.

“We will be paying the same as the Big Three are paying,” Mr. Burns said.

In a statement, G.M. said it believed that Lordstown Motors “has the potential to create a significant number of jobs and help the Lordstown area grow into a manufacturing hub” for electric vehicles.

In its discussions with the union, G.M. prevailed in its determination to close the Lordstown plant, but it pledged to build a battery factory that would create about 1,000 jobs in the area. The Lordstown plant, which most recently made the Chevrolet Cruze, once employed 3,000 workers.

A U.A.W. spokesman said Thursday that the union was “committed to making sure there are quality and good-paying jobs” in Lordstown, but did not comment specifically on the plans outlined by Mr. Burns.

The pickup that Lordstown Motors says it will build was developed by Mr. Burns’s previous company, Workhorse Group, based in Cincinnati. He left that business to start a venture to produce the electric pickup while Workhorse focused on an electric delivery truck.

Financing for the factory purchase was provided by Brown Gibbons Lang & Company, an investment bank in Cleveland. Lordstown Motors said that with the bank’s help, it hoped to recruit strategic investors as it built a new assembly line at the plant.

Mr. Burns said earlier that he would need to raise about $300 million to acquire the Lordstown factory and get it running again.

G.M. announced a year ago that it planned to close the plant, which was making a small car, the Chevrolet Cruze. Sales of the Cruze had fallen significantly as American consumers flocked to roomier models like sport utility vehicles.

That move drew criticism from President Trump, who had vowed to revive factory jobs in the United States. In May, after a phone conversation with G.M.’s chief executive, Mary T. Barra, Mr. Trump announced on Twitter that the automaker had found a buyer for the factory, naming Workhorse as the future owner.

At first, it was unclear how a sale would go through. Workhorse itself has been struggling. Although it is vying for a potentially large contract with the United States Postal Service, it reported just $5,508 in revenue for the second quarter.

Mr. Burns was supposed to set up a new company to buy the plant and produce the Workhorse-designed pickup truck, but hadn’t secured financing for the venture or even come up with a name. Yet G.M. stuck by the plan.

As contract talks opened in the summer, the union pushed G.M. to keep the plant and assign new work to it — a demand that became a rallying cry in the 40-day strike, which shut down most of the company’s operations in North America.

In the end, the union won substantial pay increases and bonuses and promises of $9 billion in investments in United States plants, but accepted a permanent halt to G.M.’s Lordstown operation.