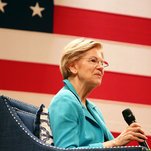 “Yes, billionaires will have to pay a little more,” Senator Elizabeth Warren said of the revised tax package she introduced recently, “six cents on each dollar.”

This modest-sounding proposal, though, would have a far-reaching impact on the wealthiest Americans when combined with her other tax plans — shrinking colossal fortunes over time and making it much more difficult to hand down multibillion-dollar legacies.

The tax bite for any individual would not equal the $100 billion that Bill Gates jokingly cited, but over time it would still sting, according to estimates by two economists who advised Ms. Warren. If her wealth tax had been in effect since 1982, for example, Mr. Gates, who had made his first billion dollars by 1987, would have had $13.9 billion in 2018 instead of $97 billion.

As for the 400 people who made it to Forbes magazine’s list of the country’s wealthiest people, each would have an average worth of $3.1 billion, down from the current $7.2 billion.

by the 400 richest Americans …

… and how a wealth tax in effect

since 1982 would have lowered it 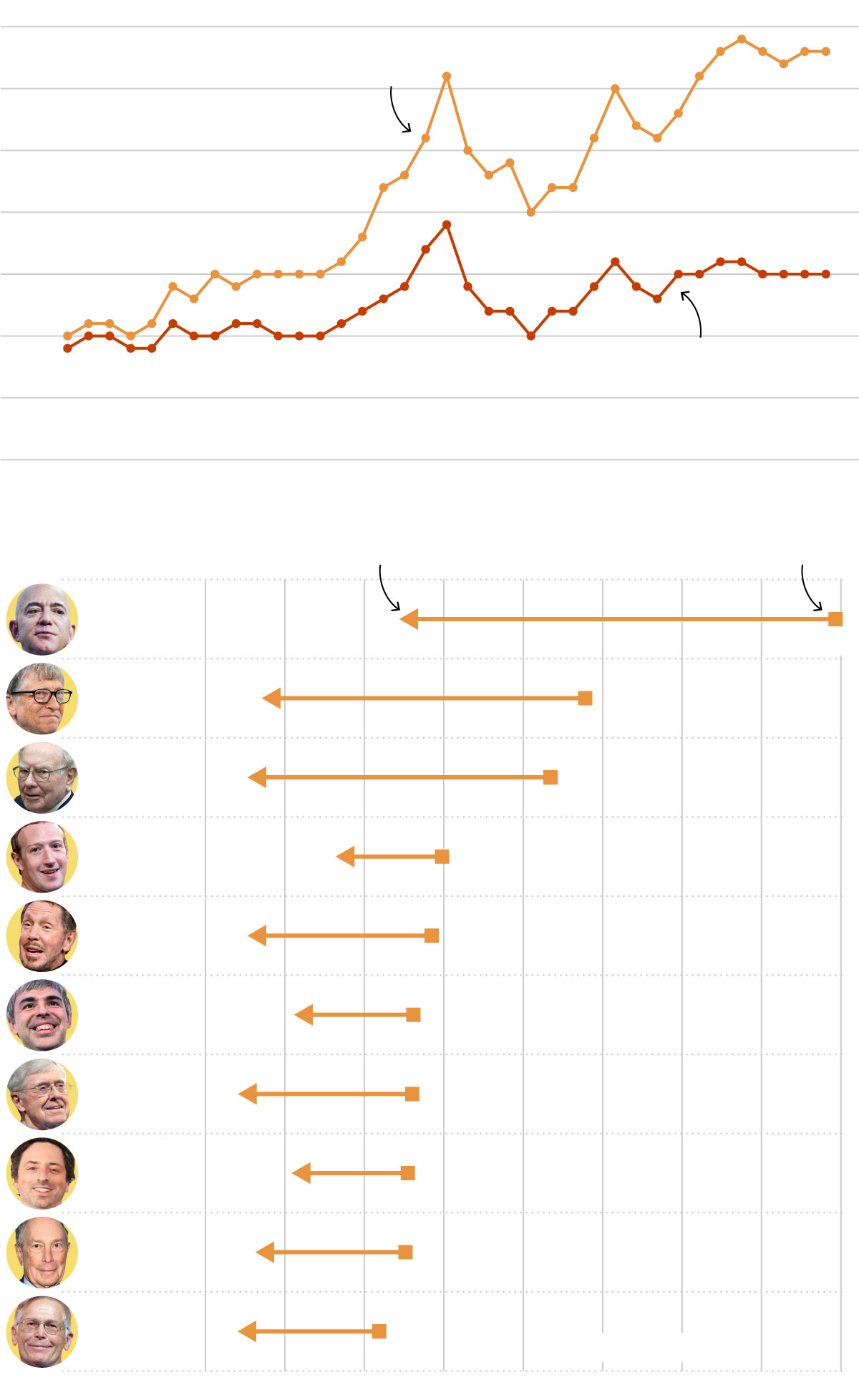 by the 400 richest Americans …

… and how a wealth tax in effect

since 1982 would have lowered it

How a wealth tax in effect since 1982 would

have affected the top billionaires’ wealth

Whether you think that is the program’s greatest feature or its worst flaw depends on how you think wealth is best created and distributed.

For fans, it is a long-overdue effort to rebalance an economic system that has lavished outsize riches and political power on a tiny band of winners while stranding a vast majority of Americans in jobs that can no longer cover the cost of essentials like housing, education and health care.

For critics, it represents an ill-conceived and impractical attempt to redirect the rewards earned by the most productive and inventive entrepreneurs, investors and business leaders. In addition to being unfair, they argue, the plan would shackle economic growth.

Ms. Warren, from Massachusetts, is not the only Democratic presidential candidate to promise to corral the galloping growth of riches controlled by those at the top. But she has steered away from demonizing it like Senator Bernie Sanders of Vermont, describing herself as a “capitalist to my bones.”

In a post on Medium, she said she was simply asking “those who have done really well in the last few decades to pay their fair share.”

And she detailed her plan in response to rival candidates who demanded that she explain how she would pay for her “Medicare for All” proposal, rather than in response to complaints that her previous ideas did not sufficiently soak the superrich.

But if her methods and motivation differ, the result would be similar. Over time, billionaires would have many fewer billions.

Gabriel Zucman, who has advised Ms. Warren, said that is the point. “You had a good idea at 30, that’s great, you can be a multibillionaire for 10 to 20 years,” he said of entrepreneurs in an email. “What an annual wealth tax of 6 percent does is that it makes it harder to stay a multibillionaire at age 70, 90, etc. It makes wealth circulate.”

He and Emmanuel Saez, both economists at the University of California, Berkeley, estimated what the impact would have been if Ms. Warren’s wealth tax had been in effect from 1982 to 2018.

The combined trove owned by the 400 wealthiest Americans would be 42 percent of the $2.9 trillion total that Forbes estimated last year.

Mr. Sanders, who has also fashioned a wealth tax, would trim their fortunes slightly more, according to calculations by Mr. Zucman and Mr. Saez.

These, of course, are just estimates. The economists’ model makes lots of assumptions and does not take account of some of Ms. Warren’s other proposals, like taxing investment profits at the same rate as wages and taxing them every year instead of only upon sale.

Individuals and businesses would also be certain to change their spending and investing in quest of creative ways to avoid paying more. Political contributions, for example, might increase as some try to roll back the tax increases.

Still, families would have a much tougher time establishing multibillion-dollar dynasties that echo for generations in the face of taxes that aim more aggressively at wealth, capital gains and inheritances. Bequests exceeding $1 billion would be taxed at a marginal rate of 70 percent under Ms. Warren’s proposed estate tax.

For Mr. Sanders, preventing concentrated wealth from passing from generation to generation is the goal. He argues that such legacies undermine democracy.

“I don’t think that billionaires should exist,” he has said. In introducing his tax plan, Mr. Sanders, who identifies himself as a democratic socialist, said, “It eliminates a lot of the wealth that billionaires have, and I think that’s exactly what we should be doing.”

Ms. Warren’s pitch is somewhat different: She wants capitalism’s rewards to be shared more broadly. With nearly a third of the nation’s wealth, the top 1 percent of American households have combined assets exceeding those of the middle 60 percent. Taxing the rich, she argues, is the fairest and most efficient way to pay for the kind of ambitious health care and educational programs that would help accomplish that goal.

Surveys have shown wide public support for a wealth tax. Yet judgments of what is fair vary.

Forbes counts 607 American billionaires. A handful have stated that they support a moderate wealth tax. George Soros, Liesel Pritzker Simmons, Ian Simmons, Chris Hughes, Nick Hanauer and 13 other wealthy individuals signed a letter over the summer in support of such a tax.

“I definitely understand how that would make lots and lots of extremely rich people uncomfortable,” said Mr. Hanauer, co-founder of a Seattle-based venture capital firm and an early investor in Amazon. “But I’m more worried about our democracy.”

“Don’t get me wrong,” he added. “I would prefer 3 percent.” But even at 6 percent, he said, “we would all survive and continue to be rich and fly around in our planes.”

He pointed out that most Americans had been living with meager income growth for decades, while the silk-thin layer at the top shoveled in enormous gains, cumulatively more than 400 percent since 1980.

“All you’re doing is saying to the richest percent of Americans that the rate of growth of your assets and wealth will now match what has happened to other Americans over the last 40 years,” Mr. Hanauer said.

Some magnates, like Mr. Buffett and Mr. Gates, have pledged to give at least half of their wealth to charity during their lifetimes, which still leaves them — and not the government — in control of how those vast sums will be spent.

Ms. Warren’s wealth tax would kick in at $50 million. Households would pay a 2 percent annual tax on any additional assets, like stocks, jewelry, yachts and homes. For billion-plus fortunes, the marginal rate would climb to 6 percent (up from the 3 percent she initially proposed).

Investment returns, of course, range from devastating losses to eye-popping gains. One benchmark, the S&P 500 stock index, has had an average annual return of about 8 percent over the last 60 years.

So in some cases and some years, multibillionaires could owe the government more than they made in profits. That’s because these taxpayers would be taxed at a 6 percent rate even if their portfolios held, say, Treasury bonds that paid just 2.5 percent.

“The tax rate on capital income at the top could easily exceed 100 percent once the wealth tax is in there,” said Alan Viard, an economist with the American Enterprise Institute, a conservative research group.

More likely that kind of wealth tax would operate as more of a cap on the number of billions one can amass over a lifetime.

How such taxes would affect the size of the economic pie is also a subject of speculation. Mr. Gates, for example, said at The New York Times’s DealBook conference last Wednesday that he supported “super progressive tax systems” but that it was also important to maintain “the incentive system.”

Some economists, including self-identified Democrats, have predicted dire effects on growth, investment and business confidence along with constitutional challenges and administrative nightmares.

Others have been more cautious with their predictions. “I get tired of people whining that taxes on the rich are going to destroy the economy,” said William Gale, a co-director of the Urban-Brookings Tax Policy Center. “But even I feel that these are pretty big taxes.”

He said it was hard to know the potential impact of Ms. Warren’s and Mr. Sanders’s plans because the United States had never taxed billionaires at this level.

And the political realities, he added, make it unlikely that they ever will.

That is one reason Mr. Hanauer, the billionaire, said the “squealing” was overblown. “It is cheap to be supportive of ambitious policy proposals like this,” he said, “because they rarely pass in undiluted form.”

What to Make of the Numbers in the May Jobs Report
Jimmy Kimmel Does What He Can to Help Disney Attract Advertisers
Brooks Bros., ‘Made in America’ Since 1818, May Soon Need a New Calling Card
Unemployment Rate in U.S. Fell in May: Live Updates
Category: Business
Tags: Business News, Business Updates