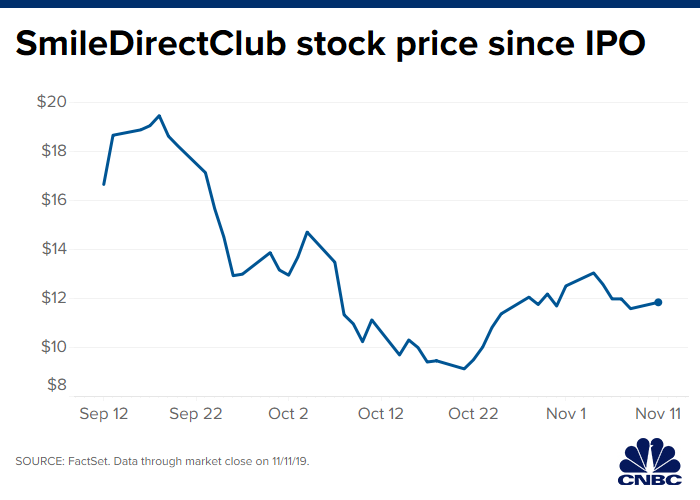 Online dentistry company SmileDirectClub’s third-quarter revenue jumped by 50% over the last year, even as its losses swelled, the company said in its first earnings report since going public two months ago.

The company’s shares, which closed down 8% on Tuesday, seesawed in after-hours trading. The stock plunged by as much 10% after initially rising on the news.

Here’s what the company reported, compared with Wall Street estimates:

Given inconsistencies with outstanding share counts for a recently public company’s first quarterly report, CNBC does not compare earnings per share figures with EPS consensus estimates.

SmileDirectClub reported a third-quarter net loss of $387.6 million, or a loss of 89 cents per share. The company posted a net loss of $14.95 million in the year-ago quarter.

The company’s expenses climbed in the quarter. SmileDirectClub recorded a one-time charge of $324 million related to stock-based compensation and a $6 million charge related to its IPO costs. Meantime, SmileDirectClub’s legal expenses doubled as the company fights legislation aimed at reining in online dentistry companies.

“You can expect us to continue to fight in order to protect the access to care that consumers want and deserve,” CEO David Katzman told analysts on a conference call reviewing its earnings.

For the full year, SmileDirectClub anticipates revenue of between $750 million and $755 million.

SmileDirectClub made its public debut in September. Shares slid 28% on its first day of trading, making it the worst initial public offering of the year for a so-called unicorn, or a start-up valued above $1 billion. SmileDirectClub’s shares are trading at around $11, well below its $23 per share IPO price.

The start-up, founded in 2014, sells teeth aligners directly to consumers on its website and in its “SmileShops” starting at $1,895 for a two-year plan. Founders Fenkell and Jordan Katzman say they want to disrupt the orthodontics industry with less expensive teeth-straightening treatments, convenience, and splashy television and social media advertisements.