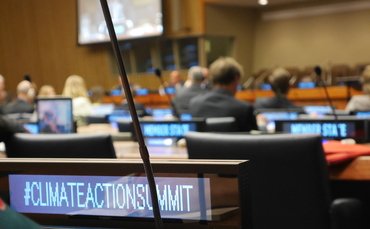 The UK’s contribution to global decarbonisation should be more in line with its ‘fair share’ of responsibility for climate breakdown, think tank says

The UK has made the fifth largest cumulative contribution to climate change, and therefore has a duty to offer more financial support to help poorer countries to decarbonise.

That’s according to think tank the Institute of Public Policy Research (IPPR), which has today released a new report arguing the UK’s foreign policy priority should be helping less developed nations cut their emissions.

It argues that the current way international cooperation is structured is failing to bring about an adequate response to environmental crises.

Ahead of crucial UN climate talks which begin in Madrid on Monday, the IPPR says the UK should commit £20bn to the UN’s Green Climate Fund up to 2030.

It also calls on the UK to use its influence in international organisations such as the World Bank and the International Monetary Fund to increase financial support for cliamte action.

It could also reform international trade, or leave trade agreements that are not oriented to respond to environmental breakdown, it says.

That would ensure the UK is doing its “fair share” to address the crisis it helped to create, said Laurie-Laybourn Langton, IPPR associate fellow. “The world only has a chance of responding environmental breakdown if countries take on their fair share of sorting it out,” he said. “This share should be based on how much a country has contributed to the problem in the past and its current ability to help out.”

The UK is a wealthy country with a large past and current contribution to environmental destruction, so should shoulder more of the burden, he added.

The report also warns that failing to tackle the climate crisis will create a “new domain of risk” around the world. The insurance industry is threatened by rising losses from extreme weather, while millions could be forced to migrate as crop failures and devastating flooding becomes more widespread, IPPR warn. It says it is vital for the UK and other rich nations to work together to help nations reduce their emissions.