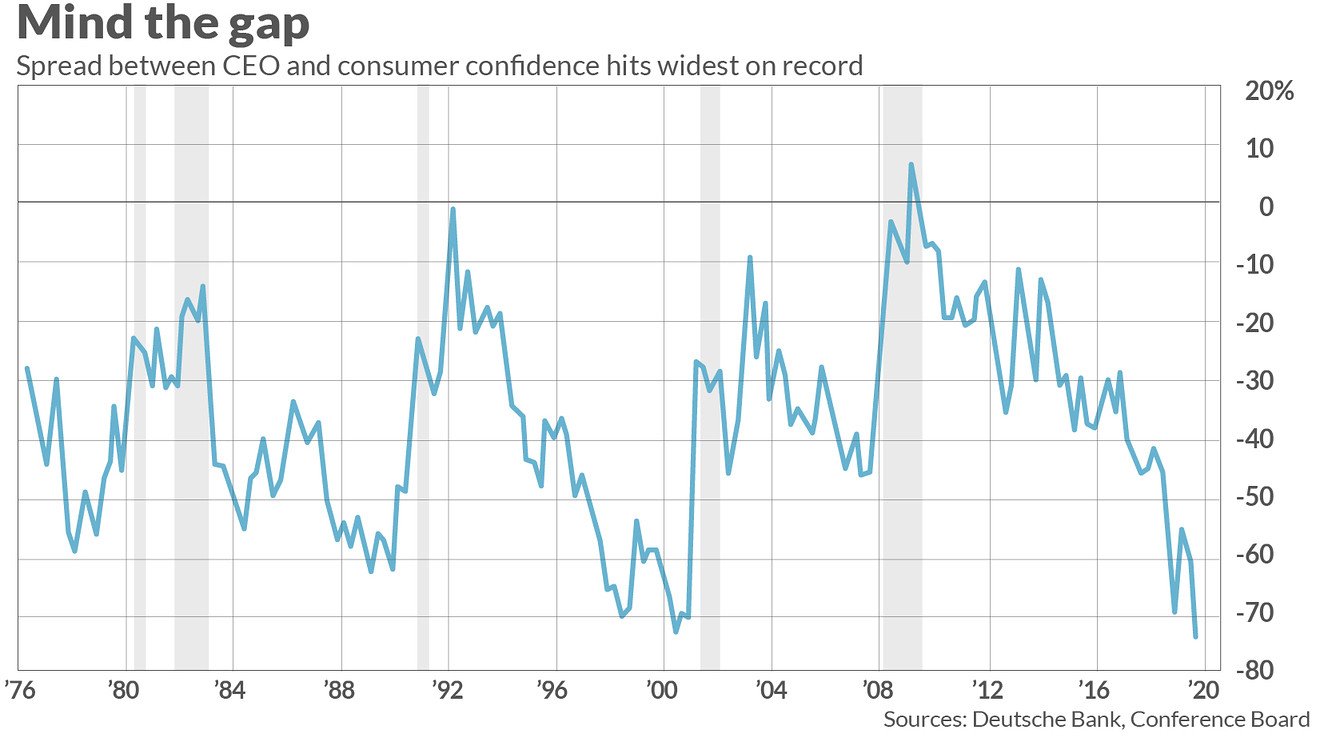 Home » News, Insights & Trends » Money & Market News » In One Chart: A surging stock market belies the biggest disagreement between CEOs and consumers about the U.S. economy on record

The stock market was in full flight Thursday, with all three main U.S. benchmarks poised to end at their highest levels ever, but those glorious gains come amid an uneasy gap in what consumers and C-suiters think about future of the U.S. economy.

Deutsche Bank Securities’ Torsten Sløk notes that consumers appear to be much more optimistic about the outlook for the economy than chief executive officers, with the gap between their economic outlooks hitting the widest on record, based on data from the Conference Board (see attached chart).

In fact, consumers have been the pillar of the economic expansion in its 11th year, with consumer spending representing about 68% of gross domestic product, according to the most recent data from the Federal Reserve of St. Louis.

Consumer confidence in October slipped to 125.9 from 126.3 in September, according to the Conference Board’s most recent report. The consumer confidence survey measures how Americans view their own financial well-being, job prospects and overall business conditions.

Still, consumer confidence levels are at levels that suggest that Americans are still spending enough to keep the economy out of recession.

Meanwhile, CEO confidence tumbled to a reading of 34 in the third quarter from 43 in the prior period (a reading of more than 50 points reflects more positive than negative responses), marking the lowest level since the first quarter of 2009.

So why are CEOs so much more glum? Sløk says it is all about trade.

“Trade war uncertainty [has been] pressing down CEO confidence. But having little impact on consumer confidence,” he said.

and the Nasdaq Composite Index

jolted into an upswing on the hope that the a China trade conflict can be resolved soon and that the Federal Reserve will continue to maintain easy-money policies.

Confidence, however, can be ephemeral and observers have been closely watching to see if the grimmer outlook for the economy espoused by chief executives eventually trickles over to consumers.

At that point, there could be trouble for the stock market too.