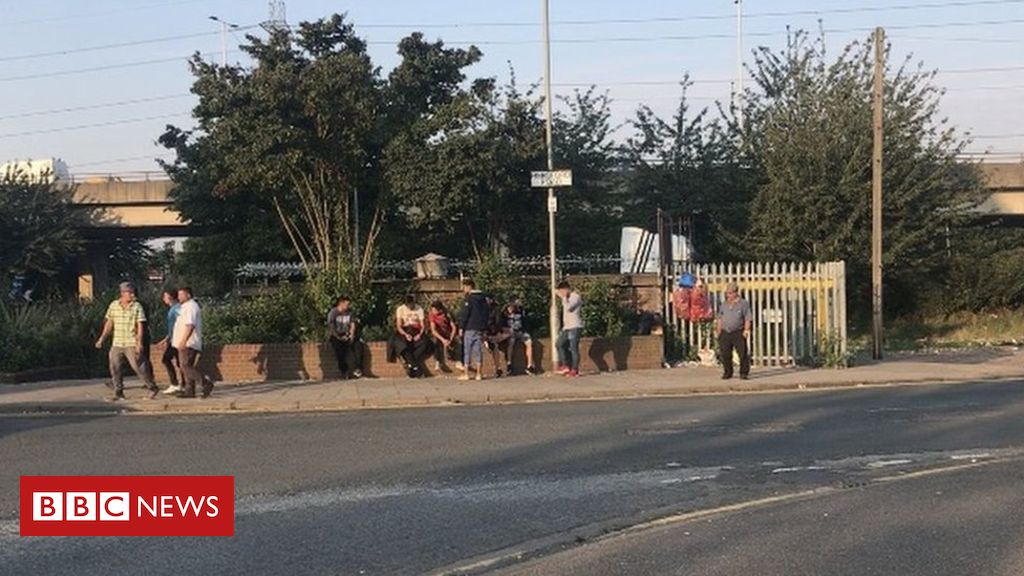 It’s seven o’clock in the morning at a major builders merchants in East London. By the roundabout outside, men gather, hunched over, smoking cigarettes.

Each time a car or van passes, they straighten up and stick out their thumbs – hoping for a day’s work from the passing building trade.

Sometimes they get lucky – someone will lean out of the window, a price will be agreed, and they hop in the back to be driven off onto the busy dual carriageway.

One man, Victor, tells us he charges £50 to £60 for a day’s work: “Sometimes more, sometimes less. But it’s better than Romania. What can I say? I don’t have documents.”

These are the jobbing construction workers providing a cheap and ready supply of labour for the UK’s building industry. All those I met were from Romania.

Last year, a survey by the charity Focus on Labour Exploitation (Flex) found that in London half of workers don’t have a contract, a third report not getting paid, half have worked in dangerous conditions and a third have experienced abuse.

The going day rate on the roundabout falls well below the minimum wage for those aged 25 and over of £8.21 an hour.

As Romanians, they have the right to work legally in the UK. But getting a construction worker’s card requires a certain level of English, a bank account, a National Insurance number and an address.

All the workers I spoke to had a horror story to tell about their experience doing this kind of work. One man had been picked up and dropped at the side of a random motorway. Another said he’d had his ID stolen.

Labour exploitation has long been a problem in the construction industry.

Chris Syder is an employment lawyer with Penningtons Manches Cooper and advises companies on their compliance with the UK’s Modern Slavery Act.

He says labour exploitation is more prevalent in the UK than we want to admit. “The UK’s construction sector has always been high risk due to its low profit margins and consequential need for cheap labour – and the exploitation of labour, particularly migrant labour, is often hidden in plain sight.”

The enforcement agency, the Gangmasters and Labour Abuse Authority (GLAA), is trying to crack down.

They’ve signed up almost 200 of the UK’s largest building firms to a code of conduct aimed at creating awareness about illegal employment practices on building sites.

Posters show workers’ rights and a phone number to ring for advice. They’re available in different languages, including Romanian.

There’s an induction process for new joiners which tells them how much they should be paid, and where to go if they need help.

The idea is that by targeting the big firms with information, many smaller businesses (and more importantly their workers) in the supply chain will see it.

“The industry’s response to this threat has been genuine and fast paced, and they are actively working with us to protect vulnerable and exploited workers,” says Samantha Ireland from the GLAA.

But it’s a Herculean task. There are 350,000 construction companies in the UK, employing almost three million people. Many of these are one-man bands.

The government says: “The law is clear that employers should conduct simple right to work checks to avoid employing illegal workers. Those who employ illegal workers or who breach employment law protections are subject to a wide range of existing enforcement powers.”

It will spend £28m next year to carry out compliance and enforcement activities against firms paying workers below the legal minimum.

But because of the way that employment in the construction industry is often outsourced to employment agencies, there are layers of complexity.

Barckley Sumner from the Unite union says this leads to a long supply chain, which shifts responsibility. “It’s the smallest companies at the bottom who are expected to do all the relevant checks and they’ve got the least amount of money.”

Charities such as Flex argue that government bodies simply don’t have the funding to tackle labour abuse in any systematic way.

There are just 12 staff members in the Employment Agencies Standards Inspectorate who are supposed to monitor 29,000 employment agencies – the main suppliers of labour to building firms.

The government is looking at changing the way labour enforcement works. A consultation on the issue recently closed with a response expected next year.

The new director of labour enforcement, Matthew Taylor, who started in July this year, would like to see “a step-change in labour enforcement in this country”. He’s calling for a single body to replace the current system and more funding to police the issue.

In the meantime, the practice of touting for insecure work outside DIY centres continues.