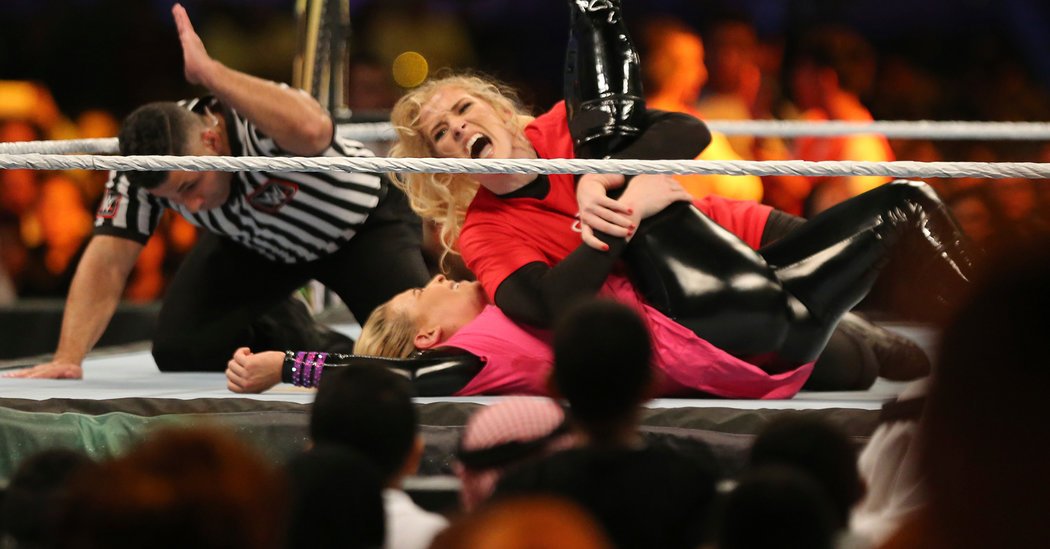 RIYADH, Saudi Arabia — On Halloween, as two female WWE wrestlers battled inside a roaring King Fahd International Stadium, Najla Ibrahim stood with a hand on her heart and another in the air, capturing the moment with her smartphone. For years, the nurse from Riyadh followed wrestling from afar and yearned for the day when women would take the ring in her country.

“I’m very proud because they are making history,” Ms. Ibrahim, 23, dressed in a black abaya and seated next to her older sister, said as the match ended under a shower of fireworks. “I’ve been waiting for this for so long.”

A year after the state-directed assassination of Jamal Khashoggi, a Saudi Arabian dissident columnist for The Washington Post, the government of Saudi Arabia is accelerating efforts to diversify its economy, cultivate domestic spending and polish its global image by broadening cultural offerings centered on Western sports and entertainment.

Staging a women’s wrestling match is no small feat in a kingdom where strict interpretation of Islamic law has long dictated that women be segregated, wear full-body coverings and have a male guardian. While the moment was notable, it was also carefully manufactured, stirring debate about whether Saudi Arabia is changing or just glossing over its flaws.

“It’s definitely ‘sportswashing,’” said Philippe Nassif, Amnesty International’s advocacy director for the Middle East and North Africa. “In the case of Saudi Arabia, they are infamous for the oppression of women’s rights and ethnic and racial minority rights. What better way to attempt to change that image than an all-women’s wrestling match?”

The relationship between international brands like World Wrestling Entertainment and the Saudi government is symbiotic, as companies seek untapped markets while the kingdom tries to move its economy beyond dependence on oil production.

But the push comes with complications. Western businesses and stars have faced backlash and boycotts amid accusations that they are aiding a public relations initiative from an oppressive Saudi government.

Getting into the game.

Wrestling is one sliver of Saudi Arabia’s new appetite for athletics.

This month, Anthony Joshua and Andy Ruiz Jr. will travel to a custom-built arena in Diriyah, outside Riyadh, for a heavyweight boxing title fight billed as the “Clash on the Dunes.” February brings the debut of the Saudi Cup, a horse race with a $20 million purse — the richest in history. A Ladies European Tour golf tournament is being planned for March.

“We are in a really huge transformation, softening the image,” Majed al-Sorour, chief executive of the Saudi Golf Federation, said on the sidelines of the Future Investment Initiative conference in Riyadh in October.

Boundaries broaden, but only so far.

The sports expansion is part of Prince Mohammed’s attempt to bring in foreign investment and increase the financial potential of a country whose population skews young. Of the kingdom’s 22 million citizens, about two-thirds are under 30.

Saudi Arabia is a monarchy ruled according to a strict interpretation of Islamic law. After Prince Mohammed was elevated to crown prince in 2017, he pursued a campaign aimed at convincing the world that Saudi Arabia was changing culturally, with a series of reforms that were methodically rolled out to burnish its image. In the last 18 months, movie theaters opened for the first time in more than 35 years, women gained the right to drive and segregation of the sexes was relaxed in public places.

On a Monday night in late October, Saudi men and women in their 20s swayed to hip-hop music at a fashion boutique that opened for Riyadh’s Design Week. Like international companies, young people in Saudi Arabia are adjusting to new boundaries and calibrating their ambitions.

At the event was Mohammed Alhamdan, who five years ago was an aspiring actor working at a McDonald’s in Riyadh before he started creating satirical music videos that went viral on YouTube. Now he has more than seven million followers on social media networks and is paid to create and perform in advertisements for brands like McDonald’s and Pepsi, which operate in the kingdom.

“Everything is new, for us and the country,” said Mr. Alhamdan, 25, who goes by the online persona Warchieff.

Saudi Arabia’s growing circle of social media influencers still tread cautiously when approaching cultural taboos. Mr. Alhamdan said he was careful to create videos that grabbed attention without veering into cultural criticism that would get him in trouble with a government that aggressively stifles online dissent.

A legacy of oppression persists.

Critics of Saudi Arabia contend that its embrace of Western sports and entertainment is a diversion to distract from a grim human rights record. “I see all of this more as a way for the government to generate revenues from things other than oil than a genuine effort by the government to grant freedom,” said Hala Aldosari, a Saudi scholar at the Massachusetts Institute of Technology.

The Central Intelligence Agency concluded last year that Prince Mohammed personally ordered the killing of Mr. Khashoggi. Since then, the kingdom has worked with international public relations firms to rehabilitate its reputation, and the crown prince has said he takes “full responsibility” for the murder. But international observers say human rights violations continue.

Amnesty International condemned the kingdom in October for arresting and detaining civil society activists and criticized the Saudi government for cloaking in secrecy the trial of those involved in the Khashoggi killing and for mass executions in April of Shiite Muslims who participated in antigovernment protests.

A Human Rights Watch report last month said that despite advances for Saudi women in the last year, numerous women’s rights advocates continued to be detained, charged with criminal offenses and tortured for speaking out.

Conditions for journalists who call for reform remain risky. The human rights group ALQST said on Nov. 25 that the Saudi authorities had arrested at least eight bloggers and journalists in five cities across the country in November, raiding their homes and seizing their laptops and cellphones.

“They are trying to cover up their abuses by holding high-profile sporting events and spectacles supported by businesspeople, politicians and sporting figures around the world,” ALQST said in a statement.

In July, the rapper Nicki Minaj withdrew from a music festival after an outcry from critics of Saudi Arabia’s treatment of women and its ban on homosexuality.

Netflix came under fire this year for pulling an episode of Hasan Minhaj’s show, “Patriot Act,” in Saudi Arabia because of the show’s criticism of Prince Mohammed and the Saudi-led military campaign in Yemen. Reed Hastings, the chief executive of Netflix, offered a blunt assessment of the decision at a New York Times DealBook conference in November, saying the company was “not in the truth-to-power business.”

Formula E, the electric motor sport racing series, also faced questions about its decision to open its season in Saudi Arabia last year, weeks after Mr. Khashoggi was murdered. Last month, the event was back again, drawing thousands of fans and musical entertainers from Britain and Norway.

“I think Saudi is going through a period of change, and I think we need to support the change,” Alejandro Agag, the founder of Formula E, said in an interview in Riyadh. “Sport is a neutral thing that brings people together.”

Ernie Els, the champion golfer from South Africa, who is helping the Saudi government establish itself as a global golf destination, offered a similar rationale. Despite backlash for his involvement with the Saudis, he said he hoped golf could help the country in the same way rugby helped unite South Africa, under the leadership of President Nelson Mandela, in the 1990s after apartheid.

“I understand the concern from the international community, but you have to start somewhere,” Mr. Els said in an interview.

Introducing American sports to the kingdom has not gone smoothly.

WWE, which held its first match in Saudi Arabia in 2014, signed a 10-year deal with the government last year that is rumored to be worth nearly $500 million. The company has faced backlash from fans on social media for accepting what they called the kingdom’s “blood money” and for excluding women from matches. In 2018, a company executive said that moving forward with an event weeks after Mr. Khashoggi was killed was “incredibly tough” but that “at the end of the day it was a business decision.”

Asked about the women’s wresting match, Matthew Altman, a WWE spokesman, said in a statement that the company had operated in the Middle East for nearly 20 years.

“Our partnership with the General Entertainment Authority further strengthens our fan engagement through large-scale events and action-packed programming while being at the forefront of change that is taking place in the region,” he said.

Arranging a women’s match was complicated, and WWE officials said they had held extensive talks with the Saudi government about the appropriate time to allow the athletes, Natalya Neidhart and Lacey Evans, to perform. Attire was also a major concern: To pass muster, the women swapped revealing costumes for loosefitting T-shirts worn over long black sleeves and leggings.

Fahad Saeed Khan, an engineer in the audience dressed in Adidas track pants and a Polo shirt, said wrestling was a welcome alternative to Riyadh’s staid entertainment options of going to a mall or socializing in a park.

“It’s good,” Mr. Khan, 27, said, adding that men and women in Saudi Arabia had been kept apart for too long. “Things need to open up.”