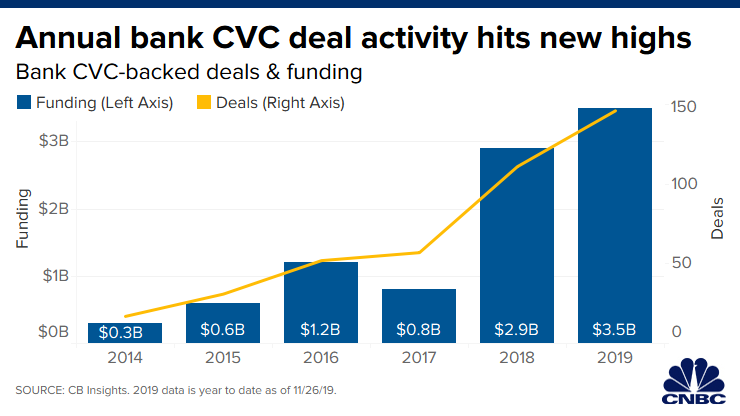 A Goldman Sachs sign is seen on at the company’s post on the floor of the New York Stock Exchange.

Corporate venture capital funding is at an all-time high and banks are leading the charge.

A handful of established companies — from Google to Airbus to American Express — have their own venture capital arm to make early stage investments. They can form strategic partnerships with the start-ups to learn from their technology, and have an early look at companies as potential acquisition targets. And much like traditional venture capital does, they eventually profit if these investments do well. The equity investments are often a way to “future proof,” according to CB Insights.

Banks are “rapidly accelerating” deal activity, with annual deal activity increasing by 8 times between 2014 and 2018, according to the report.

Investing in start-ups is becoming increasingly important for Wall Street banks as they look to diversify as their key profit engines get squeezed by falling interest rates. There’s also pressure from new fintech options like Square, PayPal, Wealthfront and Robinhood which have debuted many of the same services with zero fees.

Citi Ventures is the most active when it comes to deal flow with 66 venture deals, compared to 64 by Goldman Sachs’ VC arm.

Goldman has backed the most so-called unicorns with five companies valued at more than $1 billion. Its bets include Plaid, Circle and Marqeta.

Six other financial services groups have invested in three or more unicorns. American Express Ventures came in at number three with 55 deals since 2014.