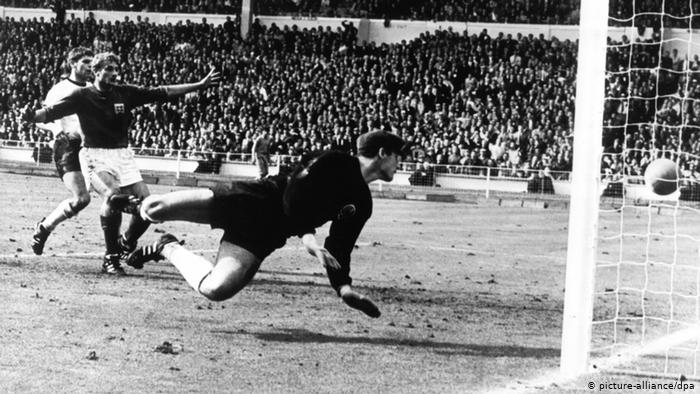 Former German national goalkeeper Hans Tilkowski, who played in the 1966 World Cup final defeat against England, has died at the age of 84.

The final between West Germany and England saw one of the most controversial wins in football history, when England’s Geoff Hurst’s shot bounced off the crossbar and landed on the goal line, before the ball was then headed clear.

The goal was awarded to give a 3-2 lead in the first half of extra time, and Hurst would go on to complete his hat trick with the last kick of the game for a 4-2 win. However, controversy over whether or not the ball crossed the line has carried on ever since. The phrase “Wembley Tor” (“Wembley goal”) has become the catch-all term in German for any goal which may or may not have crossed the line after hitting the underside of the crossbar.

Decades later, goal line technology would have spared all sides years of discussion over this scene

Hurst touted Tilkowski as a “terrific player” on Twitter. “I very much enjoyed the time we spent together over the years,” he wrote.

Tilkowski won 39 caps for West Germany between 1957 and 1967. He was also a German Cup winner with Borussia Dortmund in 1965, and helped the team become the first German club to win a European title. Tikowski and BVB beat Liverpool 2-1 in the final in Glasgow to claim the 1966 European Cup Winners’ Cup.

Dortmund said in a press release that it was mourning “one of the greatest players in the club’s history.”

“Hans Tikowski was exceedingly successful and an invariably fair sportsman, who was known for his engagement in social causes,” Dortmund’s Hans-Joachim Watzke was quoted as saying.

Born in Dortmund, Tilkowski had begun his career with nearby SC Westfalia Herne, a lower league club nowadays but a fairly large team in the region in the 1950s and 60s.

Tilkowski died in the presence of his family on Sunday after a long illness, his club said.