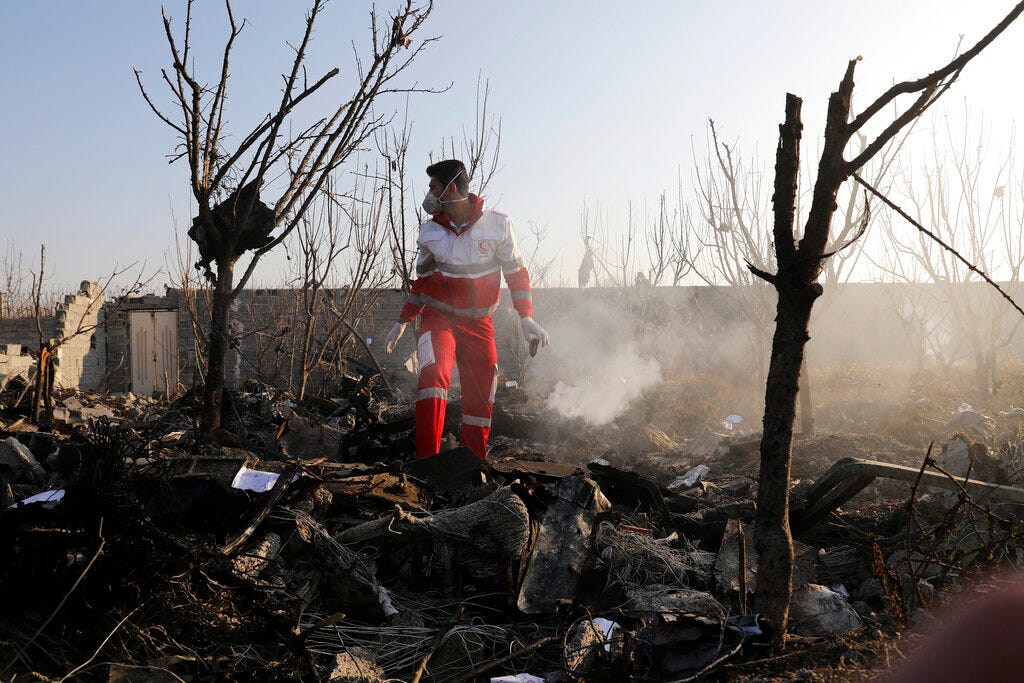 Home » News, Insights & Trends » Global Business World » Iran plane crash: Did Boeing 737-800 go down after engine failure or something else?

Authorities found the “black boxes” of a Ukrainian passenger jet that crashed into Iranian farmland Wednesday, minutes after taking off from the main airport in Iran’s capital, Tehran.

Iran didn’t say whether it would release the boxes or the flight data from them. Without it, crash inspectors said, it would be harder to pinpoint why the jet went down.

The Boeing 737-800 crashed hours after Iran launched a ballistic missile attack on Iraqi bases housing U.S. soldiers. The plane carried 167 passengers and nine crew members from different nations. There were no survivors.

Ukrainian and Iranian officials gave no indication the plane crash and the missile attack are related.

Iranian authorities pointed to the possibility of engine failure, but some aviation observers were skeptical.

“There was no way for Iran to know it was engine failure,” said Mary Schiavo, a former U.S. Department of Transportation inspector general and a pilot. She said photos of the wreckage she’s examined show no evidence of engine problems.

“That is the wreckage of an explosion in the air,” she said. “Something happened to blow that plane out of the air. Statistically speaking, that’s a missile or a bomb.”

In most major airline crashes around the world, U.S. officials participate in the investigation. Given the missile attack, it was unclear whether U.S. officials would be allowed to follow the standard procedures. In the USA, the National Transportation Safety Board issued a statement that it was “monitoring developments” and working with the State Department.

Ukrainian authorities offered to help with the investigation and prepared a group of specialists to assist with search operations, according to Ukrainian Prime Minister Oleksiy Honcharuk.

The U.S. State Department called for “complete cooperation” worldwide on the crash investigation and said it was standing by to help Ukraine.

Canada is also seeking answers after losing 63 Canadian nationals in the crash. François-Philippe Champagne, Canadian prime minister of foreign affairs, said in a tweet Wednesday morning that he had been in touch with the Ukrainian government.

63 Canadians killed:What we know so far

“Our government will continue to work closely with its international partners to ensure that this crash is thoroughly investigated, and that Canadians’ questions are answered,” Prime Minister Justin Trudeau said in a statement.

Who was on board the Ukrainian plane?

Besides the Canadians, there were 82 Iranians and 11 Ukrainians on board, Ukrainian Foreign Minister Vadym Prystaiko said in a tweet. Other than the crew, the Ukrainian nationals included two passengers. There were also 10 Swedish, four Afghan, three German and three British nationals, according to his tweet.

The Sharif University of Technology Association identified 14 of the victims who were on Flight 752 and published their photos on the organization’s website.

Ukrainian President Volodymyr Zelensky extended his condolences to the victims’ families. His office said he cut his visit to Oman short to return to Kyiv.

Zelensky announced on his Facebook page that his government is sending a team of experts, including representatives of the Ukrainian Ministry of Defense, Foreign Ministry and Security Service of Ukraine.

“Our priority is to establish the truth and those responsible for this terrible catastrophe,” he wrote.

“Our task is to establish the cause of the crash of the Boeing and provide all necessary help to the families of the victims,” Parliament Speaker Dmytro Razumkov said in a Facebook statement.

How did the plane crash?

The plane, fully loaded with fuel for its 1,430-mile flight, slammed into farmland near the town of Shahedshahr on the outskirts of Tehran. Videos taken after the crash showed blazes lighting up the darkened fields before dawn.

Qassem Biniaz, a spokesman for Iran’s Road and Transportation Ministry, said it appeared a fire broke out in one of the plane’s engines. The pilot of the aircraft lost control of the plane, sending it crashing into the ground, Biniaz said, according to the state-run IRNA news agency.

Hassan Razaeifar, the head of Iran’s air crash investigation committee, said it appeared the pilot was unable to communicate with air-traffic controllers in Tehran in the moments before the plane went down.

The answer could be on the plane’s “black boxes,” the cockpit voice and flight data recorders, which store data instrumental to the investigation.

The stakes are high because the plane involved, the 737-800, is one of the world’s most widely used jetliners. Though this jet is different from the 737 Max that was grounded last year after two crashes, Boeing’s production and safety procedures are under scrutiny because of problems with the Max.

Whatever caused the crash had to be major, given that the flight data from the plane stops abruptly despite many backup systems onboard, said John Cox, a former airline pilot with the consultancy Safety Operating Systems,based on his analysis of Flightrader24 information.

When did it happen?

Although the crash came hours after the Iranian missile strike, Ukrainian and Iranian officials said they suspected a mechanical issue brought down the aircraft, though the crash was still under investigation.

The plane was delayed from taking off from Imam Khomeini International Airport by almost an hour. It departed Tehran at 02:42 UTC Wednesday but never made it above 8,000 feet, according to data from flight-tracking website Flightradar24.

What kind of plane was it?

The Boeing 737-800 is a common, single-aisle, twin-engine jetliner used for short- to medium-range flights. Boeing records show it has built 4,982 of this type of plane.

“This is a tragic event and our heartfelt thoughts are with the crew, passengers, and their families,” Boeing said in a statement on its website. “We are in contact with our airline customers and stand by them in this difficult time. We are ready to assist in any way needed.”

The markets after missile launch:Oil up, stocks down after Iran missile attack on US troops

A number of 737-800 aircraft have been involved in deadly accidents over the years, including two flights from Dubai: one in May 2010 that killed more than 150 people and another in March 2016 that killed 62.

The 737-800s have been the subject of inspections since last year after airlines began reporting cracks in a part that keeps wings attached to the fuselage. Boeing said in October that airlines around the world inspected 810 planes, following an order from U.S. safety regulators. Of those, 38 planes – or 5% – needed repairs, Boeing said.