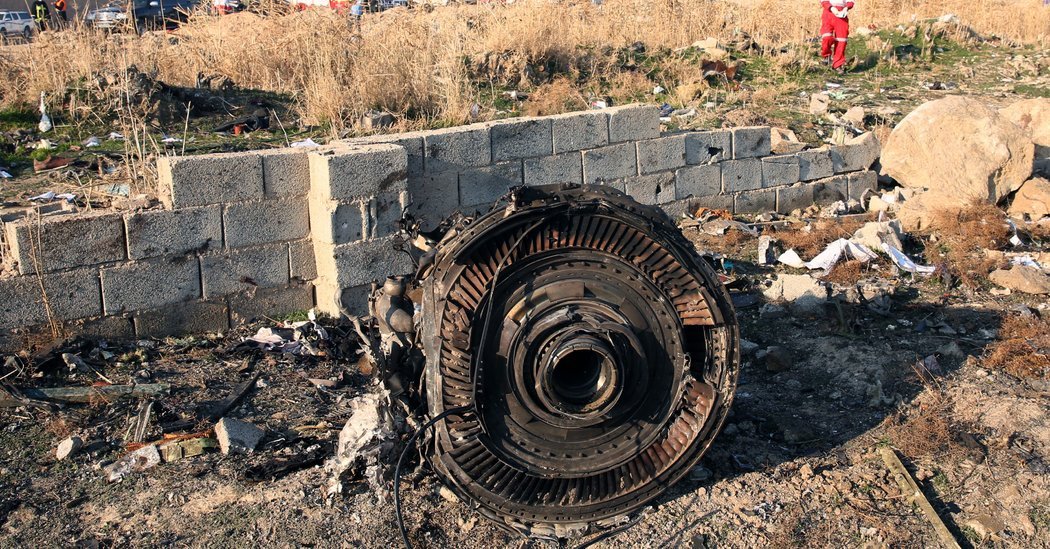 On our radar: Carlos Ghosn is scheduled to hold a news conference this morning at 8 a.m. Eastern. Get updates here. (Want this in your inbox each morning? Sign up here.)

A 737-800 jet bound for Ukraine crashed in Tehran this morning, killing all 176 people onboard. It’s the latest potential problem for a company that was already deep in crisis. Shares in Boeing were down 2 percent in premarket trading.

An engine caught fire shortly after takeoff and the pilot was unable to regain control, an Iranian government official told the state news media. Ukraine International Airlines, which operated the plane, said that the jet was made in 2016 and had been serviced on Monday.

It’s not clear what caused the crash. The Ukrainian Embassy in Tehran initially suggested that the cause was “engine failure due to technical reasons,” but later said it was too early to draw conclusions.

Crashes involving the 737-800 are relatively rare, the WSJ notes. But it’s part of the 737 NG family, which the NYT previously reported may need to be re-examined in light of a safety audit that Boeing is conducting on the still-grounded 737 Max.

More: Boeing has reversed course and recommended that pilots take flight simulator training before flying the 737 Max. And here’s a look at the Boeing board’s deliberations that led to the ouster of Dennis Muilenburg as C.E.O.

Investors grew skittish after Iran fired missiles today at two military bases in Iraq that quarter U.S. troops. But the markets seemed to calm down after both Tehran and Washington suggested that there wouldn’t be significant further escalation.

Iran launched 22 missiles at the bases, its latest response to the American killing of Maj. Gen. Qassim Suleimani, the leader of Tehran’s Quds Force.

Both sides sought to tamp down fears of wider conflict. “All is well!” President Trump tweeted, and Iran’s foreign minister, Mohammad Javad Zarif, tweeted that “Iran took & concluded proportionate measures in self-defense” and wasn’t seeking war. But the Fars News Agency, which is associated with Iran’s Islamic Revolutionary Guards Corps, said that “at least 80 U.S. troops” had been killed in the strikes.

How the markets reacted:

• Stocks in Tokyo fell as much as 2 percent, though they pulled back those losses to about 1.2 percent.

There are reasons to think that oil won’t skyrocket despite the continuing tensions, Stanley Reed and Clifford Krauss of the NYT write. Chief among them: the U.S. shale oil boom and the low likelihood that Iran will choke the shipping of Persian Gulf oil by closing the Strait of Hormuz.

Andrew Bosworth, a longtime executive at the tech giant, is taking heat for a 2,500-word missive in which he weighed in on how the company should treat the Trump campaign, Facebook’s business model and more.

• Though he’s politically liberal and said he “desperately wanted” President Trump to lose this year’s election, Mr. Bosworth said Facebook shouldn’t abuse its power to make that happen. (He cited the “Lord of the Rings” books to make his point.)

• Mr. Bosworth also said that Mr. Trump’s 2016 victory wasn’t because of Russia or Cambridge Analytica, but because “he ran the single best digital ad campaign I’ve ever seen from any advertiser. Period.”

• He added that Facebook and social media were like “sugar,” not nicotine. “If I want to eat sugar and die an early death, that is a valid position,” Mr. Bosworth wrote.

Mr. Bosworth has gotten into trouble before for his writing, including a 2018 internal memo in which he defended a growth-at-all-costs business strategy.

He published the most recent memo on his public Facebook page yesterday after the NYT reported on it, and noted that he doesn’t work on the teams focused on misinformation or civic integrity. (He oversees Facebook’s virtual reality and augmented reality division.)

ClassPass is the latest unicorn

The company, which lets subscribers take fitness classes at over 30,000 gyms, plans to announce today that it has raised $285 million in new funding, putting it in the ranks of private companies valued at over $1 billion.

ClassPass’s network of gyms includes studios like Barry’s Bootcamp, Peloton and SLT in 28 countries. Subscribers pay a monthly fee for credits that they can use to book classes.

The company is increasingly promoting its corporate wellness operation, in which companies add the service to their employee benefits. ClassPass said in a statement that it had now added more than 1,000 employers to that business. (Competitors in the space include Gympass and others.)

Investors in the new round include the investment firms L Catterton and Apax Digital, as well as an existing investor, the Singaporean sovereign wealth fund Temasek. Previous backers include Alphabet and Thrive Capital.

The Bank of England governor, who is stepping down in March, told the FT that central bankers don’t have many tools left to avoid a recession.

Mr. Carney is worried about being stuck in a liquidity trap in which traditional monetary policy changes have no effect on the economy and a looser policy has no effect on spending. (One culprit: persistently low interest rates globally.)

“There’s much less ammunition for all the major central banks than they previously had, and I’m of the opinion that this situation will persist for some time,” Mr. Carney told the FT.

He said central banks would need to find other tools, like quantitative easing and guidance on future interest rate changes.

But a solution might be out of central banks’ hands. Mr. Carney recommended that governments consider fiscal policy tools, like tax cuts or public spending increases, if a downturn hits.

What you’ve missed at the CES electronics expo

• Sony unexpectedly revealed a concept car laden with sensors, wide-screen displays, audio equipment and more, which could become a platform for sale to automakers.

• Ivanka Trump spoke about retraining American workers. “People need to be thinking about investing in their current work force so that they can enable those people to do their same job using different equipment tomorrow,” she said.

• Segway is moving beyond scooters into futuristic wheelchairs.

• The proposed sale of the internet domain dot-org to the investment firm Ethos Capital has run into fierce resistance from online pioneers. (NYT)

• The buyout firm Platinum Equity has raised $10 billion for its latest investment fund, its largest yet. (WSJ)

• The Australian gas station and convenience store operator Caltex said it had received a takeover bid from EG Group of Britain that rivals an $8.6 billion offer from Alimentation Couche-Tard of Canada. (Reuters)

• French and U.S. officials are racing to reach a compromise over France’s proposed tax on American internet giants before the World Economic Forum conference in Switzerland later this month. (NYT)

• Kelly Loeffler, Georgia’s new U.S. senator, will join the Agriculture Committee, which oversees the Commodity Futures Trading Commission — even though her husband runs the huge markets operator Intercontinental Exchange, which is under the C.F.T.C.’s umbrella. (WSJ)

• The presidential campaigns of Mike Bloomberg and President Trump have each spent $10 million on Super Bowl advertising. (NYT)

• The wireless speaker maker Sonos sued Google yesterday, accusing the tech giant of infringing on five of its patents. (NYT)

• Ken Friedman, the principal owner of the Spotted Pig restaurant in Manhattan, agreed to pay $240,000 and a share of his profits to former employees who accused him of sexual harassment and discrimination. (NYT)

• Elizabeth Wurtzel, the author of “Prozac Nation,” died yesterday. She was 52. (NYT)

Thanks for reading! We’ll see you tomorrow.