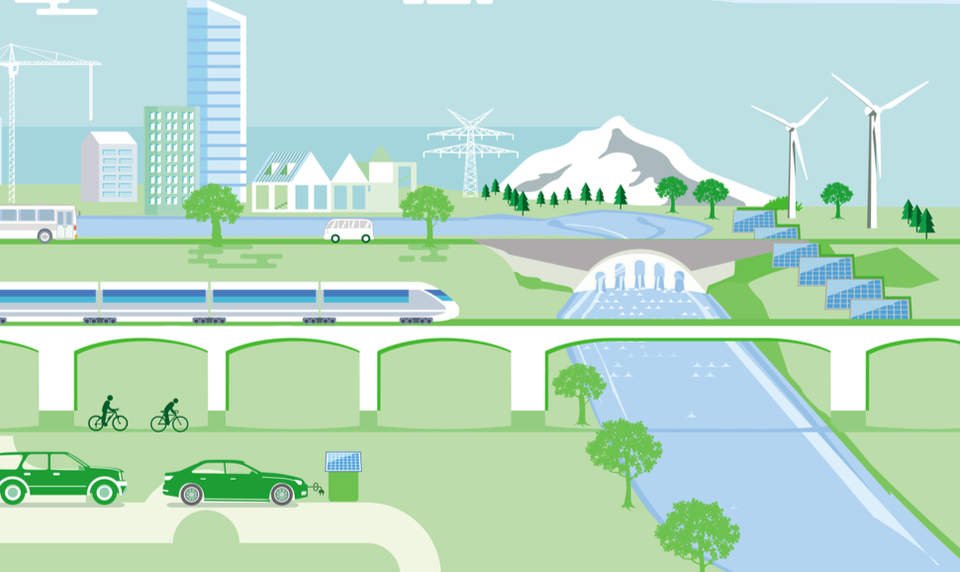 At the start of this new decade, American cities, states and businesses already have come a long way on the road to cutting greenhouse gas emissions to help tackle the climate crisis:

This puts these subnational U.S. actors on pace to reduce emissions 25 percent below 2005 levels by 2030. To make the transition to more sustainable energy, city governments must work simultaneously to meet municipal energy demand with renewables, partner with residents and the business community to increase community-wide access to clean energy and break down system-level barriers, such as regulatory or market hurdles.

In the last few years, cities have signed increasingly large power purchase agreements (PPAs) to source electricity from renewable energy developers for municipal and community use. In 2018, Philadelphia signed a 70 megawatt PPA representing 22 percent of the city government’s load. Taking it a step further, last year, Cincinnati signed a 100 megawatt deal for the nation’s largest municipal solar farm, with the first 35 megawatts meeting about 30 percent of the city’s municipal needs and the remaining 65 megawatts benefitting community residents who get their electricity from the city’s community choice aggregation program. The 20-year contract will provide a stable source of clean energy and will save the city an estimated $1.7 million.

We should expect cities to get ever more creative with PPAs, signing large deals to meet municipal needs and expanding to community members and residents. We may also see joint deals with other jurisdictions or community partners such as businesses and universities, to access economies of scale.

2. Cities will work with businesses to cut carbon emissions

Many cities choose to begin their clean energy transition by tackling municipal energy usage, which is within the local government’s control. In contrast, making progress toward community goals requires the support of and partnership with many community stakeholders, including local businesses. This is already happening in Philadelphia, where Mayor Jim Kenney launched the Climate Collaborative of Greater Philadelphia to provide training and technical assistance to city leaders to implement their own climate-related goals. Over 40 partners have signed up, including universities, small businesses, NGOs, clinics and hospitals and transit authorities. Drawing on the city’s recent experience, the collaborative’s first workshop covered how to procure renewable electricity through off-site solar agreements. In 2020, expect to see more collaboration across sectors to move more efficiently toward community-wide energy goals.

3. Cities will band together to overcome barriers to clean energy

After cities sign clean energy commitments and begin to identify options to increase renewable energy use, they often encounter barriers in the form of laws or regulations that come from outside the city limits, such as the state government. To address these hurdles, cities have started banding together to create coalitions for change. In Virginia, sustainability staff from cities and counties organized trainings to better understand how to increase access to renewable energy within the state. The Colorado Cities for Climate Action coalition worked to expand state climate policy by providing testimony from local officials, supporting climate-friendly bills and building relationships between state- and locally elected officials. In 2020, expect to see more cities collaborating to engage with state, regulatory and wholesale market actors.

4. Cities will explore new channels to influence their energy future

Cities are increasingly aware of the influence that utilities and state regulatory commissions have over the renewable energy options available to local governments, so some are working together for regulatory change. Cities in states such as Colorado, Florida, North Carolina and Wisconsin have formally partnered with their investor-owned utilities, creating new avenues to collaborate toward their shared climate and energy goals. This kind of engagement can result in large-scale change: in Utah, city-utility engagement led to the passing of landmark legislation that will enable the next steps toward a new 100 percent community-wide renewable electricity utility solution that can serve cities across the state.

Cities are also starting to participate in regulatory proceedings at state public utility commissions. In 2019, Minneapolis joined forces with state agencies, businesses and consumer advocates to oppose Xcel Energy’s acquisition of a new gas plant. As cities become more aware of how their energy mix and options for purchasing renewables are set at the regulatory level, we may see more cities participating in regulatory proceedings.

Key words for 2020: Collaboration and creativity

This will be a big year for U.S. policy, and the energy space is no exception. Despite a lack of action at the federal level, cities, states and businesses continue to move toward a clean energy future — and this year, we will watch many of these actors move from commitment to action together. Just days into 2020, the Virginia state legislature is already introducing new bills that, if passed, substantially would change the future of renewable energy in the state. Many cities, including Minneapolis (PDF) and Chicago (automatic PDF download), are researching new solutions that could help them to meet their clean energy targets. To increase access to renewable energy, the next decade will require greater partnership across sectors and more emphasis on system-level change. In many cases, cities will be the ones to help us get there.