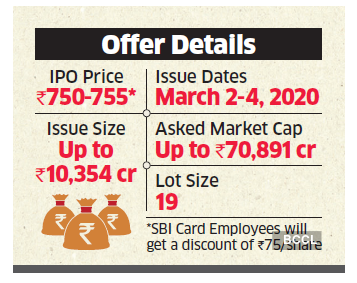 ET Intelligence Group: SBI Cards & Payment Services (SBI Cards), a credit card subsidiary of SBI will raise Rs 500 crore through fresh issue of shares and up to Rs 9,854 crore through offer for sale of existing shares. After the IPO, SBI’s shareholding will fall to 70 per cent from 74 per cent and that of CA Rover Holdings will reduce to 16 per cent from 26 per cent. Given its dominant position in the domestic credit cards market and strong parentage of SBI, the company is well-positioned to take advantage of the rising trend of digital payments. Investors with a longterm horizon and wanting an exposure to growing consumerism may consider the IPO.

BUSINESS AND FINANCIALS
The company is the largest pure play credit card issuer in India. Considering the card services of banks, it is the second largest after HDFC Bank. With 10 million cards in force and Rs 98,500 crore in card spends in the nine months to December 2019, SBI Cards had 18 per cent market share. Nearly half the cards are issued using distribution channels of SBI and other banks while the remaining are through its customer acquisition network across 145 Indian cities.

Credit card spends in the country increased by 32 per cent annually to Rs 6.1 trillion between FY15 and FY19 according to RBI and CRISIL following rising awareness of digital payments. The proportion of digital transactions increased to 62 per cent in FY19 from 25 per cent in FY14. These factors augur well for SBI Cards.

RISKS
Competition from prepaid instruments such as e-wallets and UPI service is rising though they are mainly used for small transactions and do not offer credit period or benefit of reward points unlike credit cards. In addition, SBI Cards has adopted technologies to offer virtual cards on various mobile platforms thereby improving its appeal to tech savvy young generation.

Economic slowdown affecting discretionary spend is another major risk. However, so far, the company has not experienced any slowdown in either card issuance or card spending.

VALUATION
Considering the equity after IPO and annualising the net profit in the nine-month to December 2019, the company demands price-earnings multiple (P/E) of nearly 46. It has no listed peers in India. A look at more mature markets such as the US reveals that American Express, which derives over half of the revenue from consumer services including credit cards, trades at a trailing P/E of around 17 with RoE of nearly 30 per cent. Another US company Capital One, which earns nearly two-third revenue from the card business, trades at a P/E of 9.2 and has an RoE of 10 per cent.

While SBI Cards’ valuation looks aggressive, it reflects the faster growth in the Indian market as well as the company’s growth momentum.