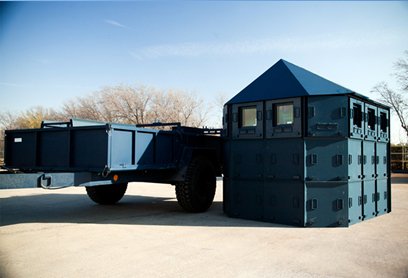 McCurdy’s Armor was designed to save soldiers’ lives by replacing the use of sandbag technology for providing protection against small arms, mortars, rockets, artillery, armor-piercing rounds and suicide bombs. The system can be easily assembled by three people in about ten minutes using no hand tools or heavy equipment.

Dynamic Defense Materials, LLC (DDM) markets McCurdy’s Armor®, a patented portable armored wall system developed to save lives by replacing the use of sandbags to protect soldiers from snipers, mortar rockets and small arms fire. McCurdy’s Armor® was named in honor of Marine LCpl Ryan S. McCurdy, who lost his life saving a fellow Marine during a sniper attack on January 5, 2006.

There are currently hundreds of McCurdy’s Armor® kits being used by the armed forces and police in The United States, Iraq, Afghanistan, Mexico, Singapore, Japan and numerous other locations around the world.

cCurdy’s Armor® is a patented portable armored wall system that offers protection against small arms, mortars, rockets, artillery, armor piercing rounds and suicide bombs. This rapidly-deployed armored wall system can be assembled into a full guard post by a three-person team in under ten minutes, using no hand tools or heavy equipment. The system can be dismantled and redeployed in a similar amount of time.

McCurdy’s Armor® is constructed of aluminum frames that unfold and connect to each other using steel connector pins. Once these frames are connected in the desired structure design, armor panels can be attached to the front and back depending on the sought protection level. It is a modular system; both the size and configuration of the armored wall can be tailored to include multiple corners and can create fully contained areas with protection on four sides or as needed to address specific tactical scenarios. The system includes ballistic windows that also can be opened and used as gun ports.