Yes, the media f’ing gorged on the Quibi story yesterday. We did, they did, everyone did. And really, truly, how could anyone not? Nearly $2 billion came in (with $350 million heading back), a star-studded lineup of executives and production teams, an absolutely massive advertising campaign, and a PR strategy that all but begged the sun to melt Icarus’ wings.

Our collective exhalation on the complete clusterfuck that was Quibi though leads to a legitimate and interesting question: are we obnoxiously attacking a good-faith failure? Wasn’t Quibi a bet just like every other startup, a bet that just happened to fail? A16Z’s general partner Andrew Chen put it vividly on Twitter, saying “It’s gross” and lauding the entrepreneurial challenge of building a startup:

all the people rushing to their keyboards to type in their “i told you so” hot takes on Quibi:

It’s gross. Building a company is hard, why celebrate a fail?

Go build something instead of using your energy to let twitter know how smart you are the say the consensus thing.

I understand this view, deeply. In fact, all of us at TechCrunch understand this. One of the things that we pride ourselves on here is respecting the hustle. We know how hard it is to launch a startup. As a team, we collectively talk to thousands of founders every year, and we hear the heartbreaking stories and the downright trauma at times that comes with building a company. Occasionally (and yes, we focus most of our reporting here), we hear about the wins and successes too.

Let’s be honest: most startups fail. Most ideas turn out wrong. Most entrepreneurs are never going to make it. That doesn’t mean no one should build a startup, or pursue their passions and dreams. And when success happens, we like to talk about it, report on, and try to explain why it happens — because ultimately, more entrepreneurial success is good for all of us and helps to drive progress in our world.

But let’s also be clear that there are bad ideas, and then there are flagrantly bad ideas with billions in funding from smart people who otherwise should know better. Quibi wasn’t the spark of the proverbial college dropout with a passion for entertainment trying to invent a new format for mobile phones with ramen money from friends and family. Quibi was run by two of the most powerful and influential executives in the United States today, who raised more money for their project than other female founders have raised collectively this year.

Chen makes an important point that many obvious ideas in tech started as dumb ideas. That’s true! In fact, the history of technology is littered with examples of ideas that investors and the press thought were either dumb or impossible to build (which is a more polite way to say “dumb”).

for everyone who “obviously” knows when they see a bad idea in tech – everyone citing Quibi today – here’s a thread for you. https://t.co/QpXXKG16Vm

Why do supposedly dumb ideas turn out to be smart? Part of the reason is that what starts out as dumb slowly iterates into something that is very smart. Facebook was just a “facebook” for checking out your classmates on college campuses. If it had ended there and withered away like many other social networks before it, we might well have put it in the waste bin of history. But Zuckerberg and his crew iterated — adding features like photos, a feed, messaging and more with an extreme focus on growth that made the product so much more than when it started.

We’ve seen this pattern again and again throughout time. Founders get feedback from users, they iterate, they pivot, they try new things, and slowly but surely they start to migrate from what might have been a very raw concept to something much more ready to compete in the ferocious marketplace of business and consumer attention today.

This was never the story with Quibi. There was never an iteration of the product, or a long-range plan to assiduously cultivate users and talent as the company found traction while carefully husbanding its capital for the inevitable tough moments in the growth of any company.

Yes, we in the commentariat do make mistakes, but analysts weren’t dumb in pointing out all of Quibi’s glaring, red-alert flaws. Those analysts were smart. They were right. They might not be right next time, of course — no analyst should get too overconfident in their predictions. But at the same time, we shouldn’t just collectively throw up our hands and declare every idea that comes our way a brilliant gift from the heavens. Most ideas are dumb, and we and everyone else have every right to point that out.

So respect the hustle. Don’t kick a hardworking entrepreneur down who is just trying to get their project out there and show it the world. But that doesn’t mean you can’t call out stupid when you see it. The best entrepreneurs know that — even at its most vituperative — critical feedback is the necessary ingredient to startup success. Lauding everyone lauds no one.

As Silicon Valley’s entrepreneurs cluster around the worldview that artificial intelligence is poised to change how we work, investors are deciding which use cases make the most sense to pump money into right now. One focus has been the relentless communication between companies and customer that takes place at call centers.

Call center tech has spawned dozens if not hundreds of AI startups, many of which have focused on automating services and using robotic voices to point customers somewhere they can spend money. There has been a lot of progress, but not all of those products have delivered. Cresta is more focused on using AI suggestions to help human contact center workers make the most of an individual call or chat session and lean on what’s worked well for past interactions that were deemed successful.

“I think that there will always be very basic boring stuff that can be automated like frequently asked questions and ‘Oh, what’s the status of my order?’” CEO Zayd Enam says. “But there’s always the role of the person that’s building the relationship between the company and the customer, and that’s a really strategic role for companies in the modern age.”

Udacity co-founder Sebastian Thrun is the startup’s board chairman and is listed as a co-founder. Enam met Thrun during his PhD research at Stanford focused on workplace productivity. Cresta is launching from stealth and announcing that they’ve raised $21 million in funding from investors including Greylock Partners, Andreessen Horowitz. The company recently closed a $15 million Series A round.

Cresta wants to use AI to school customer service workers and salespeople on how to close the deal.

There’s quite a lot of turnover in contact center jobs and that can leave companies reticent to spend a ton of time investing in each employee’s training. Naturally, there are some inherent issues where the workers interacting with an individual customer might not have the experience necessary to suggest a solution that they might if they had more experience. In terms of live feedback, for many, fumbling through paper scripts at their desk can be about as good as it gets. Cresta is hoping that by tapping improvements in natural language processing, their software can help alleviate some stress for contact center workers and help them move conversations in the direction of selling something else for their company. 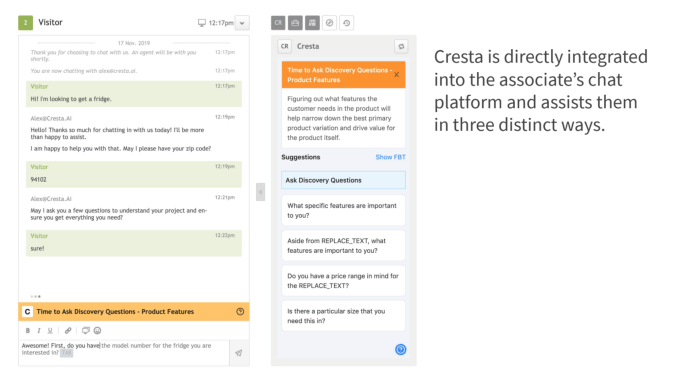 Cresta is entering a field where there’s already quite a bit of interest from established software giants. Salesforce, Google and Twilio all operate AI-driven products for contact centers. Even with substantial competition, Enam believes Cresta’s team of 30 can offer its customers a lot more individual attention.

“We’re one of the few technical teams where we’re just obsessed with the customer, to the point where it’s normal for people on our team to fly to the customer and live by a call center in an Airbnb for a week,” Enam said. “When Greylock led the Series A, they had heard that and said that’s what gave them so much conviction that we were the team to solve the problem.”