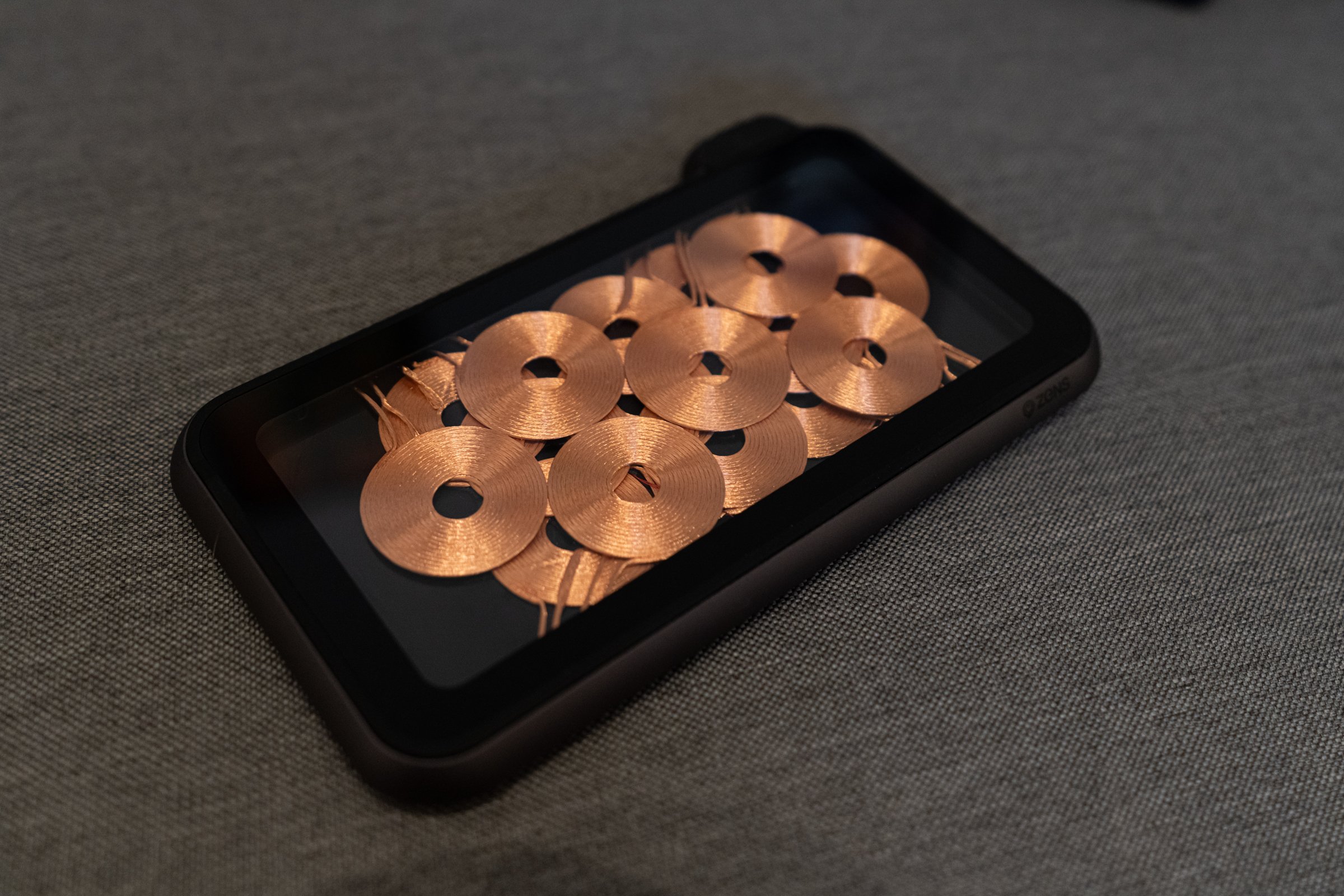 Apple’s cancellation of its AirPower wireless charging mat was one of the company’s few big public flubs, but the concept behind the cancelled product remains attractive: A wireless charging pad that supports multiple devices, and that isn’t picky about how you set down your device in order to make a connection. Wireless charging accessory maker Zens has actually created such a device with the Liberty Wireless Charger, and while it doesn’t offer everything that AirPower claimed to be able to do, it’s a big step up from current wireless chargers and a a great companion for iPhone, AirPods and Apple Watch.

The Zens Liberty is special because of how it uses the wireless charging coils that are responsible for the charging ability of any wireless chargers – wound circular loops of copper cable that provide the induction power received by devices like the latest iPhones and AirPods charging case. Zens has stacked 16 such coils in an overlapping array – which, conveniently, you can see in pretty much full detail in the transparent glass edition charger that’s available today alongside the fabric-covered version.

These overlapping coils are the key to the unique abilities of the Zens Liberty: Specifically, their arrangement means you can place your devices down in basically any orientation and they’ll begin charging right away. Most charging pads, by comparison, have one, two or sometimes three coils placed in specific locations, meaning you have to make sure your device is properly situated above one to actually get it to start charging. If you’ve been using wireless chargers for any length of time, you’ve probably had the unfortunate opportunity to get this orientation match-up wrong, resulting in a phone that didn’t charge at all when you wake up the next morning.

Zens’ Liberty does indeed solve this annoyance, and I found I was able to put devices down basically however I wanted them and have them charge up.

Up to two Qi-compatible devices can be charged at once, and they’ll each work with up to 15w of power, which is at the top end of what any current devices support. I tested it out with Android phones, iPhones and AirPods (plus AirPods Pro) and found that all worked without issue and basically however I wanted to lay them across the surface. The caveats here are that you should think of the areas around the edges of the charger as basically non-active, so stay around an inch in from the outer surface and you should be fine.

This flexibility may not seem like much (why not just pay attention when you’re putting your devices on a more traditional charger?) but it actually is a very nice convenience. Just that small assurance that you can easily put your device down on the Liberty’s generous surface and not worry too much about checking whether a connection was actually made is a big relief, when you charge a device as much as you do your iPhone or your AirPods. 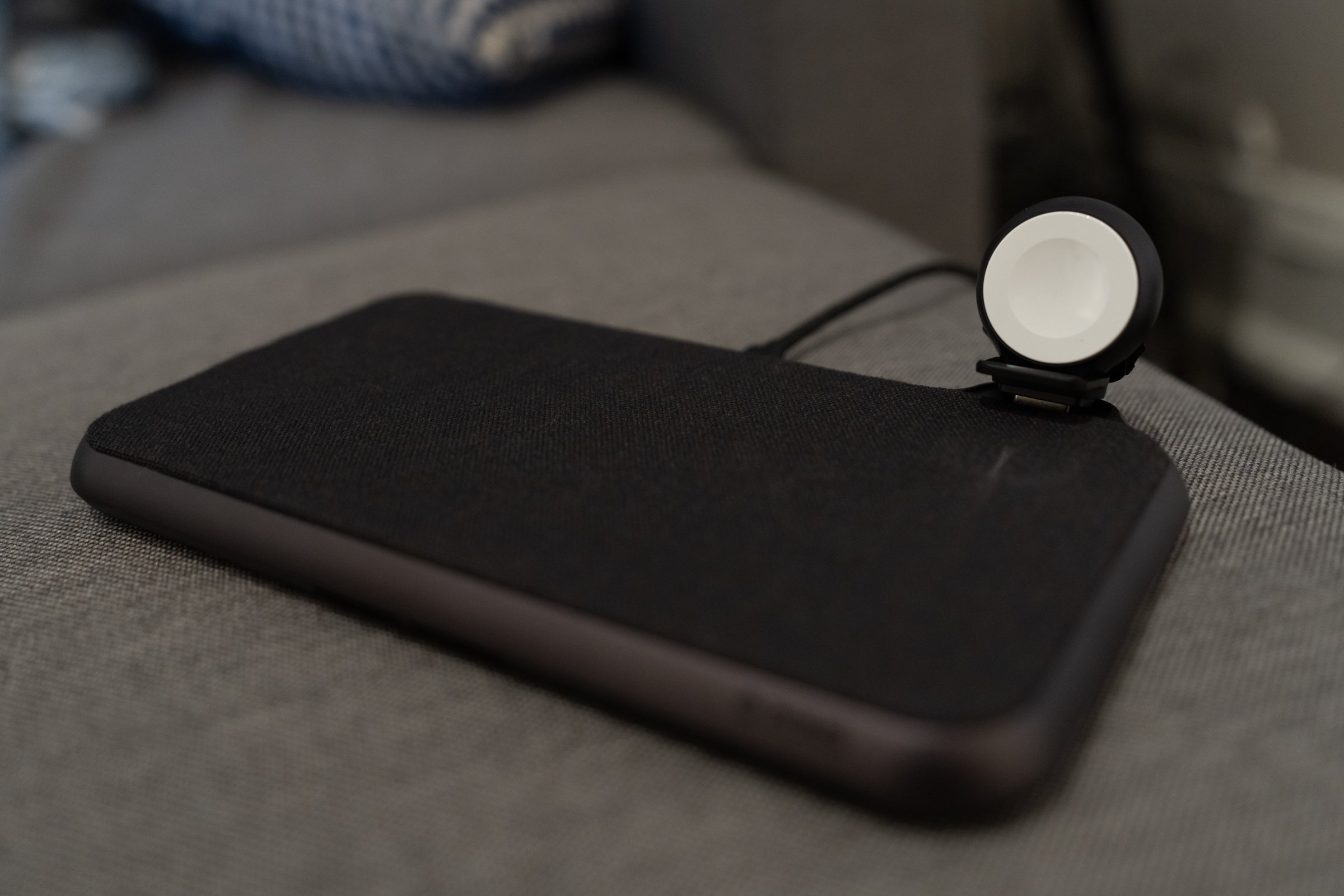 The Zens Liberty can’t charge the Apple Watch on the pad, the way that Apple had advertised the cancelled AirPower would’ve been able to. But with an accessory, the pad can become a truly all-in one charging station for your mobile Apple kit, Watch included. An officially supported Apple Watch charger with a USB A connector on one end is an add-on option that Zens offers, and it conveniently slots right into a USB port present on the Zens Liberty (and protected/hidden by a rubber flap when not in use).

This port actually supports any kind of USB powered device, so you can also use it with a cable to charge another gadget, like an iPad for instance. But it’s perfectly designed for the new Zens Apple Watch charger accessory, which comes with a little plastic shelf that snaps in to support your Watch when it’s charging. It provides just the right angle for Apple Watch’s Nightstand mode, and is a necessary addition for anyone looking for an all-in one solution.

The Zens Liberty is the best all-around charging option available currently, based on my testing so far. It’s also powered by an included 60w USB-C charger, which comes with two international plug adapters that makes it a great travel brick for other devices, too. That means you can also use standard USB-C power bricks with it, too, rather than requiring some kind of proprietary power adapter.

There are some downsides to keep in mind, however: You should realize that this is a big charger, for instance. That’s good in that it supports multiple devices easily, but it’s also going to take up more space than your average wireless charger. It’s also thick, which allows for the stacked coils and cooling system (this is the only wireless charger I’ve used that has clear and obvious vents, for instance).

That said, the Zens Liberty makes good on the true promise of wireless charging, which is convenience and flexibility. And it’s well-designed and aesthetically attractive, in both the fabric-covered and striking transparent glass designs. Zens is now accepting pre-orders for these, with shipping starting sometime this month, and the standard fabric version retails for €139.99 ($155 USD) while the glass edition is €179.99 ($199 USD), and the Apple Watch USB stick sells for €39.99 ($44.50 USD).