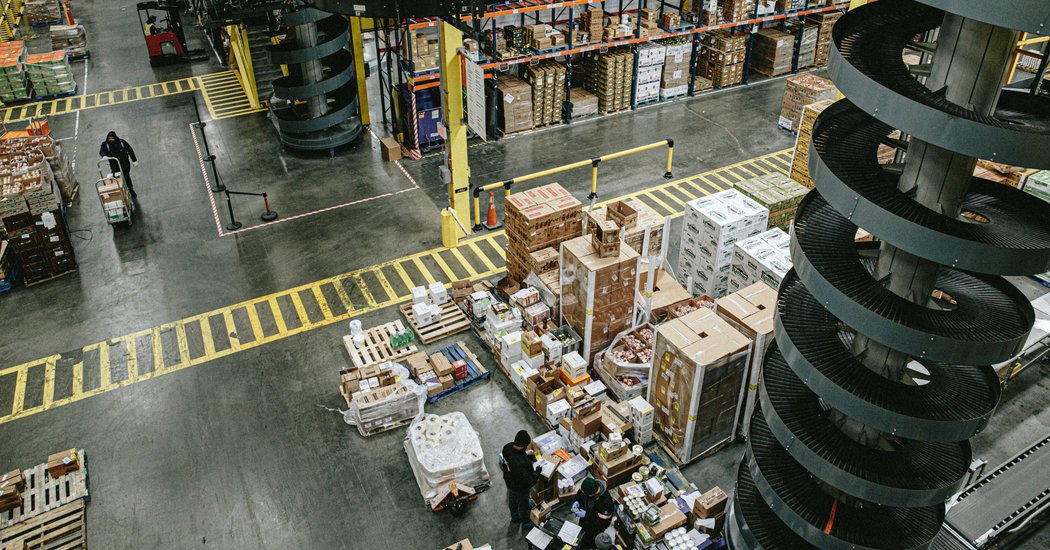 About a year and a half ago, longtime patrons of the pioneering grocery delivery service FreshDirect started complaining that orders were arriving hours late. There were broken eggs and spoiled fruit. One customer reported that she had paid $200 for groceries — only to receive nothing but seltzer and a loaf of bread.

The source of the problems was FreshDirect’s multimillion-dollar headquarters in the Bronx, a distribution center with nine miles of conveyor belts that the company opened in the summer of 2018 after moving out of a smaller facility in the Long Island City section of Queens. A complex automated system was creating confusion on the floor of the new warehouse, resulting in canceled orders, missing items and long waits.

At the height of the crisis, FreshDirect’s chief executive, Jason Ackerman, stepped down and was replaced by David McInerney, who had helped run the company since the early 2000s. Over the next months, FreshDirect made logistical fixes that gradually eliminated the distribution problems. But plenty of damage had been done.

“We had so much trust, we could’ve built a bank of trust,” Mr. McInerney said in a recent interview. “Over time, that trust was eroded.”

Something else also eroded as FreshDirect struggled: its hold over the grocery delivery industry in New York. Over two decades, FreshDirect had accumulated a loyal following of well-to-do Manhattanites as one of the first companies in the country to execute a successful grocery delivery operation. Now, however, it faces an increasingly wide array of rivals, including Amazon, which owns Whole Foods and won over a number of FreshDirect’s customers during the chaotic transition to the Bronx.

“When FreshDirect first started, they didn’t have the competition that they have now,” said Phil Lempert, a retail and grocery analyst. “They have 100 things working against them.”

While it remains the most popular online grocery service in New York, FreshDirect’s share of the market dropped to 46 percent at the end of last year, from roughly 66 percent in 2017, according to the research firm Second Measure. Over the same period, Amazon’s share nearly tripled to around 22 percent, from a little under 8 percent. Rivals like Instacart and Stop & Shop’s Peapod brand also made up ground.

On some level, FreshDirect’s struggles are a normal evolution: A start-up pioneers a new business, before well-funded imitators gradually overtake it. But the company’s future also represents a test of whether Amazon, with its deep pockets and vast logistical infrastructure, can dominate fresh food, a market in which regional companies like FreshDirect have historically thrived.

Last month, the supermarket chain Fairway, another New York institution, filed for bankruptcy for the second time in five years, blaming the increased competition from national retailers like Amazon and Trader Joe’s. In the fall, the asset-management arm of JPMorgan Chase, which led a $189 million investment in FreshDirect in 2016, discussed selling its stake with a handful of regional and national grocery chains, according to Mr. Flickinger, who said he had discussed the matter with some of the chains that JPMorgan approached. (He declined to name the chains; the talks were previously reported by The New York Post.)

Still, Mr. McInerney insists he is not worried about FreshDirect’s competitors. The company has been profitable in the past, though a spokeswoman declined to reveal any details about its current financial performance, except to say it is “showing double-digit revenue growth.” In 2017, FreshDirect generated $600 million to $700 million in sales, according to news reports.

FreshDirect did not dispute that JPMorgan had discussed selling its stake, though Mr. McInerney said the company had no “immediate plans” to be acquired by a competitor. (JPMorgan’s asset-management branch declined to comment.) At the moment, FreshDirect delivers to New York, New Jersey and Washington, D.C., as well as some parts of Connecticut, Pennsylvania and Delaware. But Mr. McInerney, a loquacious and energetic former chef, has an expansive vision for the company’s future — a delivery empire stretching from Washington to Boston.

“Our goal is really to control the Northeast corridor,” he said. “If I were to look into the future, there could be a bifurcation of shopping, where people are buying packaged goods in one place and fresh food in another.”

That’s an argument grocers across the United States make with increasing regularity, hoping that culinary expertise and locally sourced supply chains will allow them to compete with the logistical superiority of Amazon. In November, Kroger changed its slogan to “fresh for everyone” — a branding move that experts say was intended to emphasize its advantages over online rivals that have less experience supplying fresh food.

FreshDirect, of course, has no retail stores. Its carefully selected meats, cheeses and produce are delivered from distribution centers like the warehouse in the Bronx and a separate facility in Prince George’s County in Maryland.

Over the last 18 months, the company has made a series of adjustments to regain the trust of customers who felt burned by the delivery issues in 2018. In the past, customers who reported missing items received store credit and an apology. Now, FreshDirect offers to deliver missing items immediately, at no extra cost. And first-time customers get their groceries in a different color bag than a regular delivery, so FreshDirect’s drivers know to be especially careful.

But most of all, FreshDirect has staked its future on providing high-quality fresh food from around the world. On a recent afternoon, Mr. McInerney bounded through the Bronx warehouse, grabbing passing colleagues by the shoulders and enthusiastically shaking their hands. Then he stopped next to a box of unusually large blueberries.

Before becoming chief executive, Mr. McInerney served as FreshDirect’s “chief food adventurer,” traveling widely with a team of food merchants to scout new products. On one trip, he said, he visited FreshDirect’s blueberry supplier, David Jackson, at his farm in California. In a shed where blueberries were being packed into boxes, Mr. McInerney noticed that some berries were larger than others.

“I said, ‘Dave, could you sort out just the biggest ones for me?’” he recalled. And so FreshDirect’s signature “jumbo blueberries” were born.

“It was only because we had boots on the ground that we saw that, something the farmer may not think of on their own,” Mr. McInerney said.

Mr. McInerney tells a similar origin story about FreshDirect’s eggs — except, in that case, he picked out an unusually small, especially flavorful variety.

But no matter how flavorful, eggs have to arrive intact for customers to continue ordering them. And after the switch to the Bronx, such basic requirements became challenging for FreshDirect. Food was out of stock. Orders arrived late or went missing. Customers were furious.

The logistical chaos was largely the result of insufficient planning and a rushed transition to the new facility, which was much larger and more complex than the Long Island City headquarters, according to six people familiar with FreshDirect, including several current and former employees.

It was also in line with a broader lack of organization across the company. For years, former employees said, FreshDirect’s website had been unwieldy, making it difficult and time-consuming to post updates.

After the initial issues at the new headquarters, FreshDirect become better organized and more streamlined, with the help of a consultant at AlixPartners, Holly Etlin. For one thing, meetings became more efficient, according to a former employee. Ms. Etlin was a stickler for punctuality and barred employees from having laptops out during meetings she attended. (Ms. Etlin declined to comment.)

“Like many businesses facing a transition, we had enlisted internal and external expertise to make sure we emerged in an even better position to grow,” said Sabrina Strauss, a spokeswoman for FreshDirect. “They helped us on an interim basis to support our business and keep us on a positive trajectory.”

Now FreshDirect is looking to move past its problems in the Bronx. Mr. McInerney professes to be more interested in fresh fish and poultry than potential acquisitions or competition from Amazon.

“What we do is focus on what we do well,” Mr. McInerney said. “Which is fresh food.”

In a storage room in the Bronx headquarters, he took out a box containing a large halibut, digging through a layer of ice crystals until the glistening scales emerged.

“That’s a gorgeous fish,” he exclaimed, lifting it out of the box. “Look at how beautiful that is. This fish came out of the water yesterday.”

He put it back down.