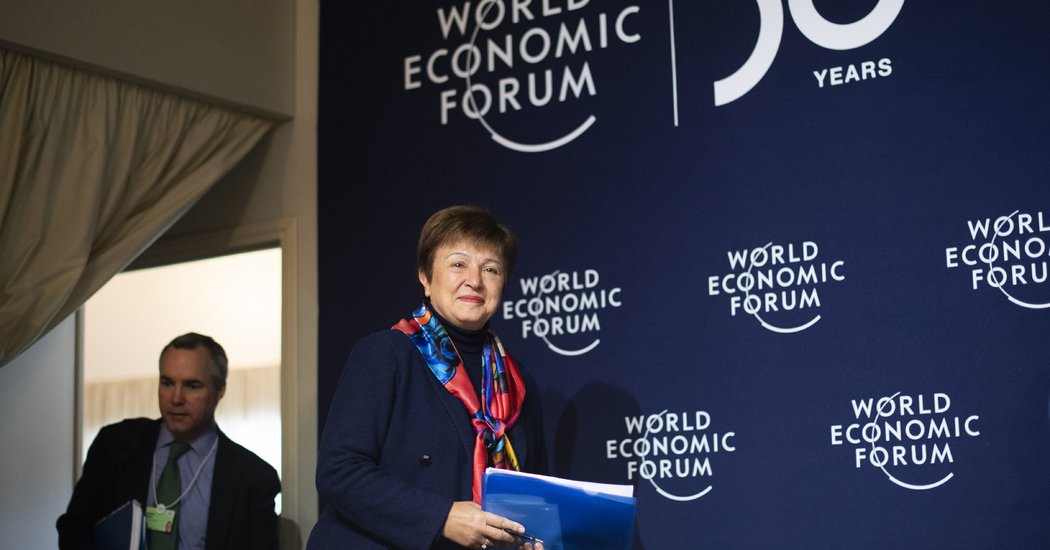 DAVOS, Switzerland — Top economic policymakers and business leaders from around the world made fairly upbeat predictions for global economic growth this year at the World Economic Forum on Friday, but cautioned that already low interest rates meant there was limited room to respond if new problems arose.

Kristalina Georgieva, the managing director of the International Monetary Fund, said the global economy’s prospects had improved noticeably even in the three months since the fund’s annual meeting with the World Bank.

That improvement was partly due to a recent easing of trade tensions, including the agreement this month between the United States and China, she said. She also cited interest rate cuts by 49 central banks and signs that industrial production around the world was starting to bottom out.

Ms. Georgieva predicted that the global economy would grow 3.3 percent this year and 3.4 percent next year, but cautioned that “3.3 percent is not a fantastic growth — it is sluggish.”

She warned that with interest rates already very low or even negative in many places, it would not be easy to respond if new difficulties emerged. In what appeared to be a veiled reference to possible economic consequences from a new virus in China and bush fires in Australia, Ms. Georgieva said that January had already produced events that posed new risks, and that policymakers would need to be able to respond more quickly than in the past when things went wrong.

Treasury Secretary Steven Mnuchin alluded indirectly to the new coronavirus that has led Beijing to quarantine more than a dozen cities in China this week, saying that health challenges need to be watched closely. Problems at Boeing — which has temporarily halted production of its 737 Max jets after two crashes — could trim American economic growth by as much as one-half to three-quarters of a percentage point in the short term, he said, while adding that the United States still has a “very robust economic outlook through 2020.”

Europe and Japan have been at the center of concerns that negative interest rates leave little room for policymakers to ease monetary policy and stimulate growth if needed. The top central bankers from both places acknowledged on Friday the dangers of negative interest rates even as they said they saw no immediate opportunity to tighten monetary policy.

Christine Lagarde, the president of the European Central Bank, said she welcomed figures showing lower unemployment in Europe and wages rising at a rate of 2.5 percent a year. But she warned that inflation had not yet risen to the point that the central bank could tighten monetary policy — which would push up short-term interest rates and leave room to cut them later.

“We are seeing inflation moving a teeny tiny bit,” she said.

Haruhiko Kuroda, the governor of the Bank of Japan, said the Japanese economy was likely to keep growing at its recent pace of 1 to 1.5 percent a year. While that has been enough to keep unemployment very low, inflation is also so low — well below 1 percent — that the central bank “will continue accommodative monetary policy for some time,” he said.

Vice Chancellor Olaf Scholz of Germany, who is also the finance minister, defended his country’s fiscal policies against recent international criticism that it was too tight. He said Germany has cut taxes and increased infrastructure spending, and planned large investments in its electricity grid and wind energy as it started to shift away from coal-fired electricity as a way to address climate change.

In a clear reference to this month’s Phase 1 trade agreement between the United States and China, Ms. Lagarde said the European Central Bank would be watching for whether recent pacts diverted trade from previous patterns. The Phase 1 agreement requires China to increase very sharply its purchases of American manufactured products, farm goods, energy and services, raising worries particularly in Europe that China will shift its orders away from them and toward American suppliers.

The European Central Bank is looking at “who will lose out from that rediversion in various agreements,” Ms. Lagarde said.

The only person from China on the stage was the moderator, Zhu Min, who is a former deputy governor of the People’s Bank of China and a former deputy managing director of the International Monetary Fund. He did not offer predictions about the Chinese economy.

In interviews on the sidelines of the World Economic Forum, corporate executives tended to share the general optimism of policymakers while echoing their worries about the difficulty of cutting interest rates to stimulate growth if something goes wrong.

“The dangers of something has increased,” said Thomas Buberl, the chief executive of Paris-based AXA, which is one of the world’s largest insurers. “The instruments that we have to react to that are much more limited.”