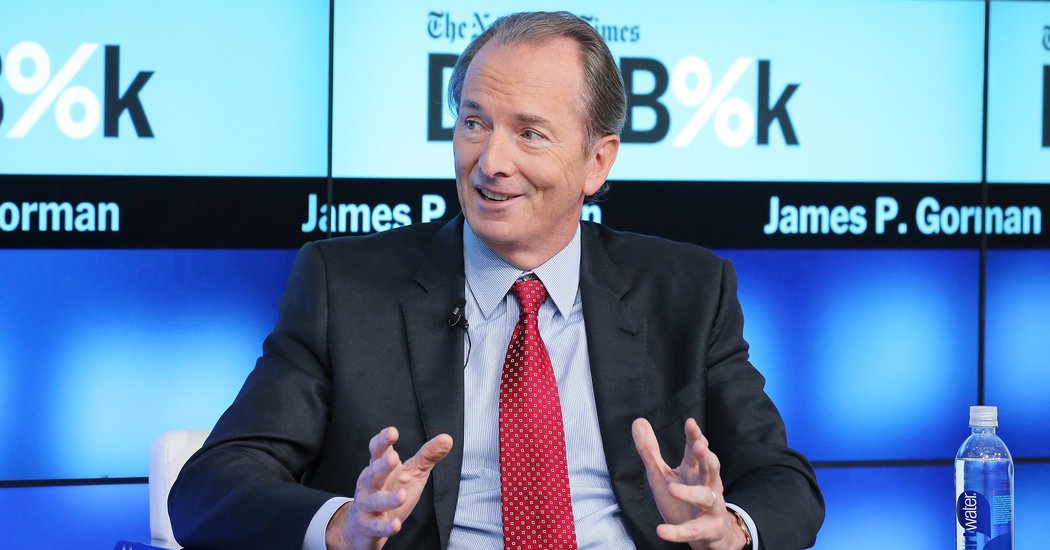 A Wells Fargo settlement with the S.E.C. over abusive sales practices could be announced as soon as today, our colleague Emily Flitter reports. (Want this in your inbox each day? Sign up here.)

The most obvious conclusion to draw from Morgan Stanley’s $13 billion purchase of E-Trade yesterday is that it blurs the boundaries between Wall Street and Main Street, with an investment banking stalwart paying a big premium for a discount retail broker. Morgan Stanley’s traditional rival, Goldman Sachs, has made similar moves via its Marcus retail unit and credit-card partnership with Apple.

• Eric Hagemann of Pzena Capital Management emailed our colleague Kate Kelly: “If they’re able to take out costs, then from a purely financial perspective buying E-Trade isn’t drastically worse than buying back their own stock, which is their main alternative use of capital.”

• Roger Altman of Evercore told CNBC: “Morgan Stanley has been leading the transformation from the wholesale side to the retail side, and this takes them further in that regard.”

• But Mike Mayo, a banking analyst at Wells Fargo, told Bloomberg, “After seeing so many of these marriages go afoul, we have more of a skeptical hat on.”

Who’s next? The deal is expected to stoke the urge to merge among other asset managers. After all, when commissions fall to zero, the only obvious ways to eke out a profit are via scale or cross-selling customers with a suite of fee-charging services.

• Interactive Brokers’ C.E.O., Tom Peterffy, told MarketWatch that his company held merger talks with E-Trade in November, suggesting that his brokerage could be up for sale.

• Wall Street players may also consider buying younger upstarts like Robinhood, the online brokerage that made its name with zero-commission trading, or Wealthfront and Betterment.

What about the regulators? Morgan Stanley’s takeover of E-Trade isn’t final until the Fed gives its blessing. The bank is betting that the Fed under the Trump administration is friendlier to post-crisis mergers than it was during the Obama years, when then-Fed governor Daniel Tarullo said in 2012 that there should be a “strong but not irrebuttable presumption of denial” for takeovers by big banks. Our colleague Jeanna Smialek caught up with Mr. Tarullo, now at Harvard, who he said his thinking remained the same. She sent us this snippet:

Mr. Tarullo said regulators needed to take into account the managerial capabilities of both firms, antitrust concerns and financial stability considerations. When it comes to stability, it matters both whether the merged company is more likely to run into trouble and whether such a stumble would cause broader problems because of the bank’s increased size.

“I’m sure people will make the argument that this is actually financial stability enhancing for Morgan Stanley,” he said, but it’s also a “big addition” to the banks’ balance sheet. So the challenge is combining both the arguable increase in resilience and any added systemwide costs of failure.

Critics of the social network say that the company has repeatedly made decisions that appease Republicans. Craig Timberg of the WaPo attributes that in part to Facebook senior executives with ties to conservatives who have the ear of company leaders like Mark Zuckerberg.

Those executives include Joel Kaplan, the head of Facebook’s Washington office; Kevin Martin, the Republican former chairman of the F.C.C. who is Mr. Kaplan’s deputy; and Katie Harbath, the company’s head of elections public policy.

“The Republicans in the D.C. office see themselves as a bulwark against the liberals in California,” Alex Stamos, Facebook’s former chief security officer, told the WaPo.

How Milken became a player in the Peloton-Flywheel fight

The fitness company Peloton recently settled a lawsuit in which it accused a rival, Flywheel, of trying to copy its at-home biking technology. Vice combed through court filings — including “improperly redacted documents,” a phrase that sends reporters’ hearts racing — that reveal various alleged attempts by Flywheel to obtain Peloton’s trade secrets. Improbably, the recently pardoned former financier Michael Milken makes an appearance in the saga:

“Milken held himself out to Foley as an interested, potential investor in Peloton and pushed for information on topics including Peloton’s future business plans and strategy, and how or whether Peloton could protect its intellectual property and exclude others from the at-home cycling business,” the complaint alleged. “At no time before, during or after the meeting did Milken disclose that he had any financial interest whatsoever in Flywheel.”

What are you waiting for?

A new report from PitchBook runs the numbers on the bumper year in private capital fund-raising in 2019, with a record $888 billion committed to managers in private equity, venture capital, infrastructure, real estate and funds raised solely to buy stakes in other funds.

One number caught our eye. Just over $100 billion in capital remains unspent in funds that are six years or older. Typically, funds have five years to deploy the funds committed by investors, or lose the ability to spend it (and burn bridges when the time comes to raise a new fund), unless they work out alternative arrangements. That’s quite an overhang, and it only grows as investors pledge hundreds of billions to new funds each year.

• “Dark Towers: Deutsche Bank, Donald Trump, and an Epic Trail of Destruction” by David Enrich. Out this week, the book by our colleague makes for uncomfortable reading in Frankfurt, Washington and beyond — read an excerpt and the NYT’s review.

• “Whistleblower: My Journey to Silicon Valley and Fight for Justice at Uber” by Susan Fowler. Also out this week, by another colleague, this book is a “powerful illustration of the obstacles our society continues to throw up in the paths of ambitious young women,” according to the review. And read her op-ed about the blog post that started it all.

• Warren Buffett’s annual shareholder letter. It’s always worth reading the folksy wisdom on investing, politics and more from the “Oracle of Omaha,” which comes out on Saturday.

HSBC has reportedly identified Jean Pierre Mustier, the C.E.O. of the Italian bank UniCredit, as the lead external choice to become its next chief. He’d be up against Noel Quinn, HSBC’s current interim C.E.O.

Volkswagen’s C.F.O., Frank Witter, plans to step down at the end of June 2021 for unspecified personal reasons.

Alexander Klabin, a founder of the $6.9 billion hedge fund Senator Investment Group, is leaving the firm. His co-founder, Douglas Silverman, is staying on.

• The Japanese owner of 7-Eleven is reportedly in talks to buy Marathon Petroleum’s Speedway gas-station chain for about $22 billion. (FT)

• The Deal Makers of the Week Award goes to Davis Polk & Wardwell, the law firm that advised on the E-Trade and Victoria’s Secret deals, as well as transactions involving Dell and Dean Foods. (@lizrhoffman)

• Advisers to Mike Bloomberg said that he had prepped for Wednesday’s Democratic debate, but that they were aghast at how poorly he performed. (NYT)

• Mick Mulvaney, the acting White House chief of staff, said Republicans were being hypocritical on the federal deficit. (WaPo)

• New Mexico’s attorney general sued Google, accusing the tech giant of using its educational products to spy on children and their families. (NYT)

• About 300 Oracle employees staged a virtual walkout yesterday to protest a fund-raiser that their C.E.O., Larry Ellison, held for President Trump. (Protocol)

• How Amazon is trying to avoid disruptions from the coronavirus outbreak. (NYT)

• The House subcommittee on economic and consumer policy requested documents from Amazon’s Ring home-security division about its security practices and work with law enforcement. (Nextgov)

• Why the stock market has shrugged off the coronavirus outbreak. (Upshot)

• Inside the Washington bureaucratic battle over whether to let Americans infected with the coronavirus fly home from Japan. (WaPo)

• California is back in a drought. (WaPo)