Uber is in talks to acquire Grubhub, said two people with knowledge of the discussions, aiming to create one giant player in food delivery as more people turn toward those services in the coronavirus pandemic.

It was unclear how advanced the discussions were and whether a deal would come together, said the people, who spoke on the condition of anonymity because the talks were confidential.

Representatives from Uber and Grubhub declined to comment. Bloomberg earlier reported the talks.

The discussions are a sign of how the companies are working to capitalize on people’s shifting behavior. With consumers staying home and many restaurants across the country shut down, more people are turning to food deliveries for meals.

But the discussions are also an attempt by Uber to limit damage to its business and find a new path for growth. The company’s main ride-hailing business has been severely hurt by the coronavirus as most travel has halted. Its Uber Eats division, which brings meal deliveries to people, has been a bright spot.

Last week, Uber posted a $2.9 billion loss for the first three months of the year and said that even though its revenue was up from a year earlier, its ride-hailing business had all but collapsed in March. It also announced it was laying off 14 percent of its work force.

“In the food category, you were seeing a bunch of consolidation,” Dara Khosrowshahi, Uber’s chief executive, said in a call with investors last week. “There is a bunch of consolidation happening on a global basis where bigger players cannot only provide better service for restaurants and consumers, but can provide a better service kind of on an economic basis that is sustainable.” 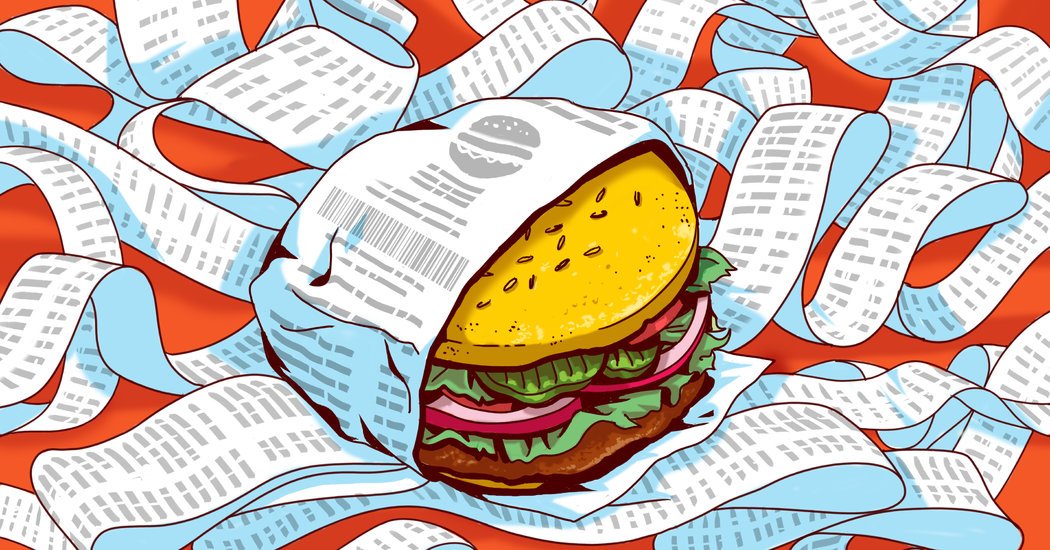 After a long day, you have probably done some back-of-the-napkin math and decided there was no point in going out for dinner when you could get food brought to your door for the same cost, plus a tip. So you fired up a delivery app.

Too bad the numbers aren’t that simple.

When you order through a delivery app, you pay multiple parties, including the driver and the companies that offer the apps, like Uber Eats and Postmates. In some cases, you pay the restaurants extra fees as well.

The markups can be downright egregious. Take Panda Express, the fast-food chain. If you ordered a $39 Family Feast value meal using Uber Eats, your tab would be 49 percent higher than if you bought the same meal at the restaurant.

You would have to really love Panda Express to pay this kind of premium — and that doesn’t even include a tip.

The extra fees creep into your bill for various reasons. Some restaurants hike the prices of food ordered for delivery. And most of the popular apps charge a delivery fee and cram tax and extra service costs into a single line on the bill, making it difficult to notice the inflated costs.

To give you an idea of the true cost of delivery app convenience, I tested some of the apps. Read on for what I found. (Hint: It wasn’t pretty.)

I tested the four biggest competitors.

I focused my tests on DoorDash, Postmates, Grubhub and Uber Eats, the four largest delivery apps in the United States. To compare them, I used all four apps to make identical orders — such as the same kind of pizza — from four restaurants.

The results, for the most part, followed this trend:

How Delivery Apps Drove Up the Cost of a Subway Order

I ordered two turkey sandwiches from a nearby Subway. Here are the details of how the costs worked out.

The markups on the food deliveries were 7 percent to 91 percent more than what you would pay if you bought the meal directly from the restaurant. Yep, you read that right.

Boy, is Uber Eats expensive. So is Postmates.

Uber Eats bills were high across the board, which was surprising because it offers practically the same type of service as Grubhub and DoorDash.

But unlike the other apps, Uber Eats charged a $3 “small order” fee when I ordered the sandwiches from a Subway. Plus it added a 15 percent service charge and a separate $3.99 delivery fee, which was determined by my proximity to Subway.

Meghan Casserly, a spokeswoman for Uber, said that the company’s goal was to deliver meals to people as quickly as possible, and that the transparent fees covered operating expenses while fairly compensating workers.

Yet among the four apps, Uber’s service charges were also the most unpredictable, I found. Its delivery fees fluctuated depending on the availability of couriers when I placed an order. That was similar to Uber’s so-called surge pricing for rides, which it uses to get more people to drive when rides are in high demand.

Postmates’ markups were also confusing. Its delivery fees and service fees both vary widely, depending on the merchant you are ordering from. For the same Subway order, its delivery fee was $2.99, lower than Uber’s $3.99. But its service charge was highest at about 16.4 percent, or $2.42.

Postmates service charges can skew higher in part because it doesn’t deliver only meals. Its couriers offer to bring you practically anything they can pick up, from a pair of sneakers to a birthday cake.

Other delivery apps generally have relationships only with restaurants, so their offerings are more limited and they charge a smaller service fee. DoorDash’s service fee for the Subway order was 11 percent, and Grubhub’s was 5 percent.

Watch out for higher menu prices.

Another thing to look out for are food prices that are inflated to cover delivery expenses.

In my tests, this practice was most evident at Panda Express. While the family value meal’s normal cost was $39, the price was listed at $44.85 in Postmates and $47.10 on Uber Eats, DoorDash and Grubhub.

How the Prices of a Panda Express Order Broke Down

For another comparison, I created identical orders for two entrees and a smoothie from Little Szechuan, a local Chinese restaurant. The spicy spare ribs, normally $13.98 at the restaurant, cost $16.98 at Uber Eats, Postmates and DoorDash.

It depends on the app and the restaurant. DoorDash, Postmates and Uber said restaurants controlled their food prices. Grubhub said it worked with restaurants on their pricing, and though it encourages them to keep prices consistent, it allows merchants like Panda Express to offer different prices for delivery. Big national chains also tend to give smaller commissions to delivery apps, so menu prices are sometimes inflated for the apps to collect more commission, according to a person at Postmates, who asked to remain anonymous.

Panda Express said its delivery prices allowed it to provide delivery services nationwide. Little Szechuan did not respond to requests for comment.

Or simply sidestep the cost of convenience.

After you rack up the exorbitant costs of delivery, going to a restaurant to eat or grab takeout probably feels like a bargain.

Here’s another idea: Consider cooking your own meal. You may need to plan a little to buy some groceries ahead of time, but there are many simple weekday meals you can prepare in a fairly short time. My favorite go-to is fresh chicken with a side of vegetables, roasted in my toaster oven. No tips or markups required.