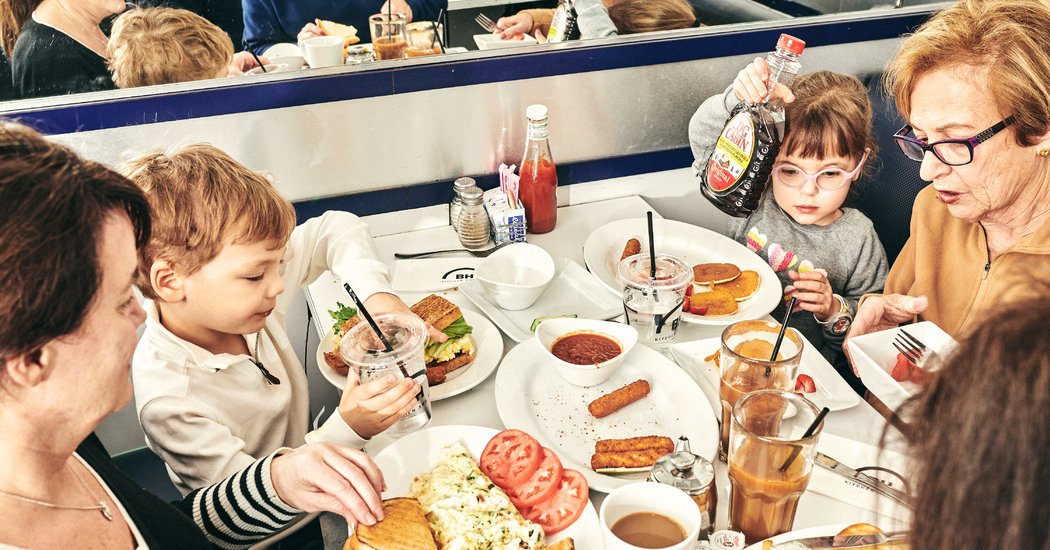 “New York is a lonely, lonely, lonely city,” Yossy Morales said one recent Saturday, a morning so frigid that a bicycle deliveryman outside Burger Heaven on Lexington Avenue at 62nd Street was forced to pour scalding water over his Kryptonite lock to key it open.

For the past decade Ms. Morales, 42 and a native of Honduras, has been on an informal mission to thaw the chill of daily life in a city of eight and a half million. During that time, she has waited tables and served at the counter of Burger Heaven, a family-owned East Side institution, slinging breakfast specials and dispensing human warmth along with a steady stream of endearments to a loyal clientele.

“Everybody has problems, and it’s fun to talk to them about their life,” Ms. Morales said. “It’s not just customer and waitress. It’s friend and friend.”

When a couple walked through the door at 7:45 a.m., Ms. Morales had put in their order before they had shed their overcoats: green salad and two eggs over easy; scrambled egg whites with seven grain bread. “Here’s your decaf, here’s your skim,” she called out.

It was an ordinary exchange on an average February day, and yet it was one tinged with melancholy because, after 77 years in continuous operation, the last of what had once been eight separate Burger Heaven outposts in Manhattan will close on Feb. 28.

The reasons are mostly unsurprising, and yet, unlike at many other small businesses in the city, landlord greed is not one. The family that runs Burger Heaven also owns its building, as it had those in several other now shuttered locations.

Years ago, Evans Cyprus, the chain’s farseeing 94-year-old patriarch and founder, bought a variety of lunch counter outposts, where he installed the vinyl upholstered booths, chrome-edged Formica counters, swivel stools and clustered ranks of condiments that amount to an archetypal diner style.

Dietary changes, too, hastened the demise: the contemporary consumer who is far more likely to thumb-tap an order for a Tingly Sweet Potato Kelp Bowl from Sweetgreen than to pull up to a Burger Heaven counter for the caloric depth charge that is a cheeseburger deluxe.

“Young people want grab-and-go,” said Dimitri Dellis, 61, and one of three family members responsible for a business that encompasses four generations. They no longer require a third place, that fixed geographical point in the triangle of daily destinations, after home and one’s job. For a generation raised on smartphones and laptops, the third place is anywhere you plop down.

Thus it has become an alien concept, the lunch counter as a regular social destination, a place where, as Astrid Dadourian, an editor and writer, said one recent morning at Burger Heaven, “you set your day, do some people watching, have some camaraderie, notice the guy who always sits at the counter and wears a hat.”

A scene like that, with its Edward Hopper associations, has come to seem as anachronistic as folding a print newspaper, something you saw once in a diorama or in a YouTube video.

Never mind that Jacqueline Kennedy Onassis regularly dined at the counter of Burger Heaven on East 53rd Street with her son, John F. Kennedy Jr., who played soldiers with the ranks of ketchup bottles, saltshakers and sugar canisters. Forget about socialites eating cheek by jowl with secretaries, bank heads alongside barbers.

This is where Barbara Walters consumed her regular rare burger, no bun, with a knife and fork. It is also where Holly Golightly regularly met Mr. O’Shaughnessy, the mobster Sally Tomato’s lawyer and bagman for her payoffs in “Breakfast at Tiffany’s.”

(There is debate over whether the joint in question was Burger Heaven or Hamburger Heaven, a competitor that opened in 1938 across the street from St. Patrick’s Cathedral, was later renamed Prime Burger and closed in 2012.)

What is the consequence of losing access to such places in a city where retail establishments are closing all the time and where many can cite lineages of beloved coffee shops long gone?

“New York can be cold, and a place like this makes you feel like you live in a village,” Kari Lichtenstein, a family lawyer, said last week, as she sat with her mother, Emilie Palef, a Toronto native first drawn here by the quirky stores and homey restaurants.

“We were on our way to another spot, and I said to my daughter, ‘I need tomato soup,’” Ms. Palef said, of how they had ended up at Burger Heaven that day.

With it she also got one of the hugs Ms. Morales serves up liberally to her customers, whose faces and orders and, frequently, troubles she seems to know by heart.

“A coffee shop is that place where they know what you like and if you don’t show up, they’re worried,” said Sarah Schulman, a New York-bred novelist raised above Romanoff, a venerable joint near Washington Square, educated in the ways of greasy spoons as a waitress at Leroy’s in TriBeCa and so strong a believer in link between these humble establishments and the engines of urbanism that coffee shops feature in two of her novels.

“When you homogenize a city, you destroy its feeling of urbanity,” Ms. Schulman said, referring to the banks and drugstores and chains retailers steadily wallpapering over the city’s indispensable quiddities. “When we lose businesses that are not chains, we lose specificity and difference.”

And heterogeneity is all but on the menu at Burger Heaven, where both the customers and the staff mirror the city’s diversity of race, ethnicity and class. “We have people working here who are from Mexico, Honduras, Venezuela, Panama, Senegal, Ghana, Nigeria, Ecuador, Bolivia and Poland, but they’re all Americans,” said the diner’s longtime manager, Sammy Hamido, who is of Egyptian origin.

More than the famous tuna salad sandwiches, made with pricey high-grade canned fish and none of the extenders a lot of places use to improve the bottom line, or the A-grade beef ground fresh on site or the Idaho potatoes peeled and cut fresh daily for Burger Heaven’s classic French fries, it is the democracy of the lunch counter that will be missed. New York, as E.B. White wrote in his most celebrated essay, does bestow upon its citizens the “gift of loneliness,” if you can call it that.

But it also offsets the fearful isolation of big cities with a measure of companionable privacy in public spaces, and a sense when you sit at Burger Heaven’s counter that your existence does not go unremarked.

In exchange for the noise and expense, the smells and the nuisance, the rats and the rest, we obtain this small pleasure: being both anonymous and known.

In all the years I’ve gone there I never learned Ms. Morales’s last name until being told Burger Heaven was closing. Nor did she know mine. To me, she was Yossy with the thousand-watt smile. To her, I was: “Hello, my love, what are you having? The usual?”