The typical construction process has remained the same over several centuries. Someone has an idea, drafts some plans, gets approval to build their idea, refines the plans, seeks out people to do the work, contracts the people best suited to the job, then construction starts and progress is monitored until completion when it is handed over for the purpose it was designed for. This is probably how the pyramids were built.

Traditionally each of these steps has required a step of plans or blueprints to be drawn-up to communicate the idea and any changes to the idea along the way. Now with the ubiquitous use of digital processes to design, communicate ideas and track progress, it is necessary to have digital data to collaborate and exchange information at each stage of this process. Without open standards, this becomes difficult.

From traditional to digital data

Today the construction industry is still in a state of transition from traditional paper plans to embrace more and more digital technology. In many cases, however, it is still necessary to combine traditional data sources like PDF plan sets with digital CAD (computer-aided design) data and more recently reality capture point clouds taken from the land or the sky which produce very large digital data sets.

How open standards can help?

Open Standard help progress information from one stage of the process to the next. From conceptual design to approval, estimating and bidding, construction and finally to handover. Open standards also help communicate information within one stage between different parties that often need to work together that have different requirement, for instance, the needs of different specialty trades like utility contractors versus paving or earthmoving contractors, or plumbers versus carpenters.

At AGTEK, the company focuses on consuming data from as many different data sources as possible to create a melting pot of information to consolidate information in order to make the best decisions possible. We then aim to make the data available to those who need it in a format that makes sense. This includes making it available in the field, on mobile apps, and in the office in ways it can be consumed by many to make better decisions not just those using expert systems.

This data sharing starts with gathering information for competitive bidding, once the job has been awarded the next step is providing data for machine control systems, of which each manufacturer has its own formats and standards for data, and the progress of construction is tracked once you break ground.

Feedback comes in the form of survey data, point clouds from drones or laser scanners, feedback from machine control systems and telematics and tracking information from where machines have been running. Again, there is a plethora of data to tie together and the use of open standards help find out not only what has happened on the side but provides an indication as to why it may have occurred. Making sure the collected data gets to those who need it in a timely manner and a format that they can act on is critical, and something that working with open standards can help. 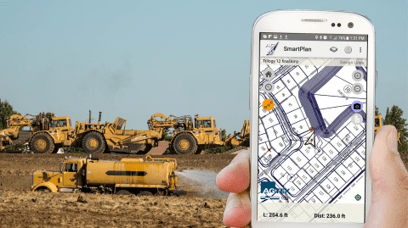 Open standards also help make system adoption easier which is another focus area for AGTEK. Closed systems attempt to lock customers into a workflow and system, that may be sub-optimal in some areas, while open systems allow for incremental adoption of technology one module at a time and integration into existing systems allowing a best of bread approach to technology selection and implementation.

Traditionally ideas have gone from concept to construction by sharing drawings and designs via paper plans. Everybody spoke the same language and was able to share and interpret these documents freely. In today’s digital economy, open standards allow for this free flow of information to continue. Closed systems force people to work in another language which limits collaboration and the exchange of ideas. To ensure the benefits of the past are maintained in construction open standards are required.