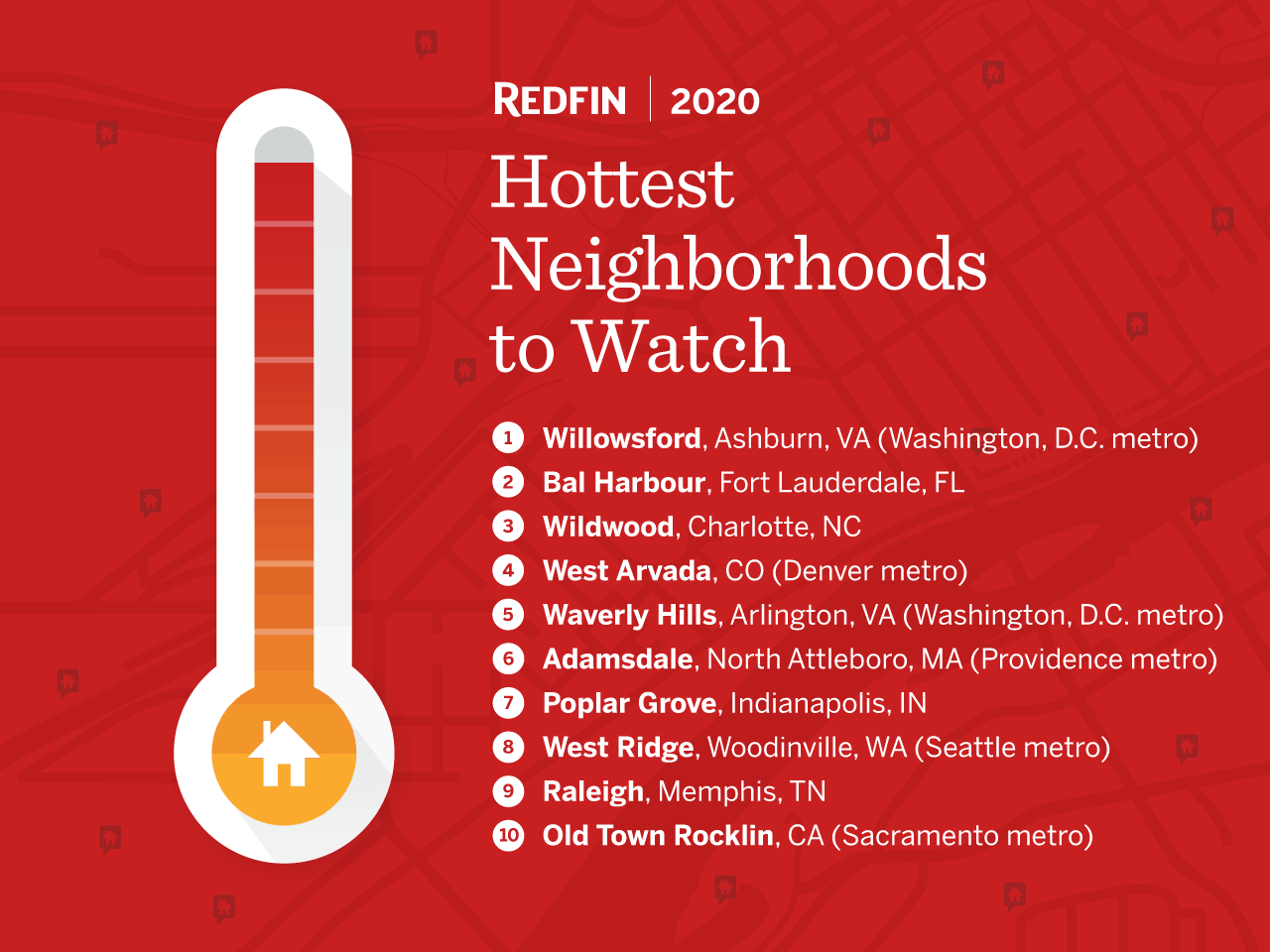 With a housing affordability crisis in full swing, neighborhoods with lower home prices surge in popularity.

Americans are searching for affordable homes and they’re increasingly looking to the southeast to find them. The majority of Redfin’s hottest neighborhoods to watch in 2020 have median home sale prices of less than $500,000, and half are in the southeast states of Virginia, Florida, North Carolina and Tennessee.

The 2020 watch list was developed by identifying the neighborhoods with the greatest year-over-year growth in listing pageviews on Redfin.com and speaking with agents about what areas are seeing rising interest from homebuyers. Some of the neighborhoods included may not meet the conventional definition of “hot,” but are still trending among homebuyers.

“The affordability crisis has caused people seeking single-family homes to search in areas they may not have considered before,” said Redfin chief economist Daryl Fairweather. “Homebuyers continue to be priced out of Washington, D.C. and New York, so you’re seeing a lot of northerners moving to the southeast, but even people from as far away as California are migrating there. The overall U.S. economy is doing better, so people feel more comfortable leaving the biggest job centers for small job centers. Plus, the southeast is becoming more metropolitan, with new restaurants and amenities that cater to younger people.”

Corporations are also setting up shop in the southeast. In Atlanta, money manager BlackRock is building a new innovation hub, with plans to employ 1,000 people there by 2024. Microsoft is spending $23 million to expand its campus in Charlotte and a new Volvo plant is adding thousands of jobs in Charleston. The two Carolinas cities are expected to lead the nation in home-price gains this year, according to Fairweather. Charleston saw a 104% annual net increase in the number of Redfin users looking to move in during the third quarter of 2019, and Charlotte saw a 44% boost.

“Willowsford is a relatively new development that’s very popular due to its location and community amenities. Homes are large and modern, with country-chic facades,” said Redfin Virginia team manager Irene De Leon. “There are swimming pools, tennis, community events, a farm, ponds, and 40-plus miles of trails. You could probably do something every day in the community if you wanted, and it all revolves around different seasons. In 15 minutes, you can get to Washington Dulles International Airport, Reston Town Center, Route 28, the Dulles Toll Road and I-66.”

“Bal Harbour is centrally located and within walking distance of the beach, which is very appealing. There’s a huge plaza with high-end shops and restaurants, and very high-rated schools. It’s also close to a marina, where people can dock their boats,” said Redfin Miami agent Larry Kevelier. “Plus, one of the main roads that runs through the neighborhood—Collins Avenue—offers accessibility to South Beach and Aventura.”

“Wildwood, just 15 minutes from downtown Charlotte, is one of the few affordable remaining areas where you can find homes under $250,000. They’re cute, ranch-style, brick homes, too, that aren’t in cookie-cutter neighborhoods,” Redfin Charlotte market manager Marcy Prentiss said. “Homebuyers have increasingly been moving east and west of Charlotte—to neighborhoods like Wildwood—instead of north, to avoid the new I-77 toll road. Plus, there’s a new development under construction nearby that will include townhomes, shopping and entertainment.”

“West Arvada is a wonderful place to live. It is 20 minutes away from Boulder, 20 to 25 minutes from downtown Denver and 15 to 20 minutes from downtown Golden. The schools are also very highly rated,” said Redfin Denver agent Corey Keach. “We have a bustling old town area with multiple shops, breweries and restaurants as well as a new light rail station. There’s a multitude of lakes, hiking and biking trails and large dog parks. You also have a head start getting to the mountains, which for a lot of my clients is a huge plus and why they have joined me on the west side.”

“Waverly Hills is the neighborhood we are all looking for. It’s like something from a story book, with undulating hills, mature trees and a `front porch culture,’” Redfin Arlington agent Candee Currie said. “The homes are all unique, some with updated history and others with beautiful new architecture. Neighbors know and care for each other. The community is a haven from busy traffic, but within walking distance of schools, shops, eateries, parks and every form of public transportation. It’s close to D.C., the Pentagon and now Amazon HQ2—all hubs of major employment, theatre, culture and sporting events.”

“Adamsdale is located in Massachusetts and borders Cumberland, Rhode Island, making it an ideal place for traveling into Providence or Boston due to the easily accessible commuter rail,” said Redfin Boston agent Alysandra Nemeth. “Adamsdale is also conveniently located near major highways, shopping and amenities all while maintaining a neighborhood setting.”

“This area has older homes and apartment/condo complexes, which led some buyers to overlook it in the past, but with the explosion of the Woodinville wine country as well as the new Totem Lake town center, prices have shot up,” said Redfin Seattle agent Michael Wyman.

“Raleigh’s home prices are typically less than $150,000, which appeals to investors, as well as first-time buyers. It is among the least expensive neighborhoods in Memphis,” said Redfin Memphis agent VanAsa Preston. “A huge percentage of Memphis’s housing stock is actually rentals, and a very large portion of these rentals is owned by out-of-state investors. Many of the views on Redfin.com may actually be coming from these potential investors, as well as first-time buyers.”

“Old Town Rocklin was not very populated in the past and used to have a lot of vacant strip malls. Now it’s the hub for the Rocklin community, with plenty of activities for families, family-owned restaurants and hip breweries,” said Redfin Sacramento agent Michelle Dane. “They built a massive adventure park called Quarry Park, with ropes courses and an amphitheater for concerts in the summer. The neighborhood hosts car shows, local food trucks and festivals. They’re also starting to do newer construction, and the houses tend to be a little less expensive. Old Town Rocklin rehabilitated a lot of older properties, and they typically don’t have all of those additional HOA and tax costs. Plus, it’s walkable and super convenient to the freeway.”

The Hottest Neighborhoods to Watch by Metro Area

Take a look at the list below to see the hottest neighborhoods to watch in your region. The rankings feature three neighborhoods each in many of the largest metro areas in the U.S., compiled using Redfin user data and agent insights.

Redfin’s hottest neighborhoods to watch algorithm is a prediction based on year-over-year growth in median pageviews of listings by neighborhood on Redfin.com from Jan. 1, 2018 through Nov. 30, 2018 to Jan. 1, 2019 through Nov. 30, 2019, and on agent insights. Neighborhoods had to have at least 50 listings in both 2018 and 2019, and 20 median views per listing to make the list. To ensure the most accurate data, we excluded some markets where Redfin has recently expanded, including Spokane, WA and Connecticut.

Redfin receives neighborhood data from a third party. Names of some neighborhoods have been changed to reflect local parlance. For instance, we changed the name of De Anza in the San Jose metro area to Sunnyvale West.