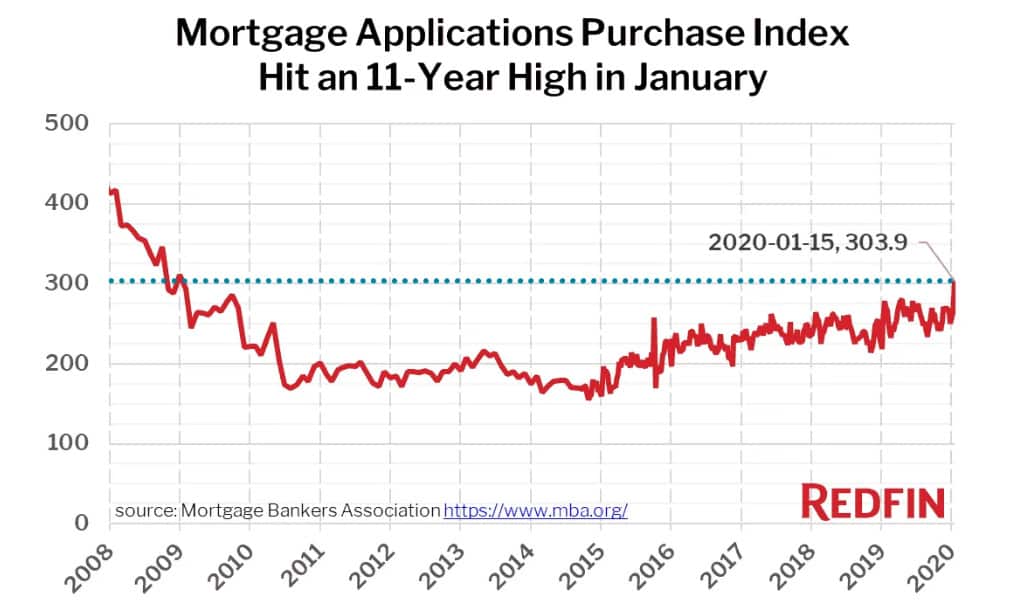 Low mortgage rates and even lower inventory are fueling a competitive start to 2020. Daryl Fairweather offers advice for buyers in this seller’s market.

Hi guys, Katy from Redfin here and I’m standing here with our chief economist Daryl Fairweather. Thanks for being here, thank you for having me.

We are going to talk about the housing market predictions what happened in January and why it looks like it’s going to be such a hot market for buyers this year.

So Daryl, what happened in January and what’s the housing market doing right now?

Buyers came back in January thanks to low mortgage interest rates. Mortgage interest rates are nearly a percentage point lower right now and they were this time last year which means if you’re a buyer, you can afford more house it’s really attractive to get out there make an offer and lock in a home. We’re seeing a lot of buyers coming out and doing just that.

So is it more than we expected at the end of last year? Is January bigger than we even thought it would be?

We’re hearing from our agents that January is like the new spring. Plenty of buyers are out there more than they would have expected for this time of year and so yeah, it’s been really busy very early in the year.

With this accelerated January being so hot, is that an indication that spring is going to be even hotter? Will it cool down in the spring at all or we’re on the on-ramp and we’re going?

I think that a lot of buyers are trying to get a jump on the spring market but there will still be more buyers who are going to wait until it’s the right time for them personally. We know when their kids are about to be out of school in the summer that’s usually when we see the most activity and I expect that to also be true this year.

So it’s just heating up quick and going to stay hot? (that’s right) I wish that’s what our summer was going to be like.

So let’s talk about what’s out there for buyers. Lots of buyers, are there a lot of homes on the market?

Because there are buyers who are snatching up homes there are actually fewer homes for sale right now that we’ve seen in two decades at least. But we do expect there to be more new listings coming on the market because builders are taking advantage of low interest rates too and are trying to build to meet the demand.  But the last 10 years there hasn’t been enough new construction to meet demand. That’s true this year, it’s going to continue to be a problem. So there just aren’t enough homes out there for everyone who wants them. If you know you want a home it’s good to be aggressive and take charge.

Buyers should set a budget, talk to their lender, get pre-approved. Figure out exactly how high they can go. If they do get into a bidding war and they have to escalate the price also figure out where the nice-to-haves and where the must-haves so that they can figure out which homes actually fit into their budget most perfectly and really give them everything that they want. Even though there aren’t as many options right now there are still homes out there and it’s good to just know going right in how much you’re willing to pay and what it is that you really want.

Awesome so it sounds like yes, it’s a competitive market but it’s competitive because there’s an advantage for buyers being those lower interest rates than we’ve seen in a really really long time.

Yeah, if you know what you’re doing if you have an agent advising you, you’ll be successful so just hang in there and know the market’s faster but you still have a good chance of getting a home. Got it, so having all your ducks in a row, making sure you’re pre-approved, and having an agent probably who can help you navigate those competitive situations and offer advice on contingencies and escalation clauses and all the intricacies of writing a competitive offer in this market. That’s right. Awesome.

My last question is what advice do you have for somebody who needs to sell and then buy right away?

There are some options available if you have RedfinNow available for example you can get a cash offer on the home that you own and have some flexibility as to when you move out which makes moving into the next home really convenient you have the cash to do it. If RedfinNow isn’t available there are other options. You can get a bridge loan for example you might want to sell your home and then rent a home in between so that you have some flexibility as to when exactly you can move out. There are options out there but it is a difficult thing to time the sale with buying a new home.

So it sounds like it’s going to be a crazy housing market this season and 2020 is going to be full of surprises. A competitive market, an exciting market for sellers. We will keep you informed here at Redfin, thank you so much for hanging out with me today and explaining what buyers can do to get ahead of the game and we will talk to you soon. 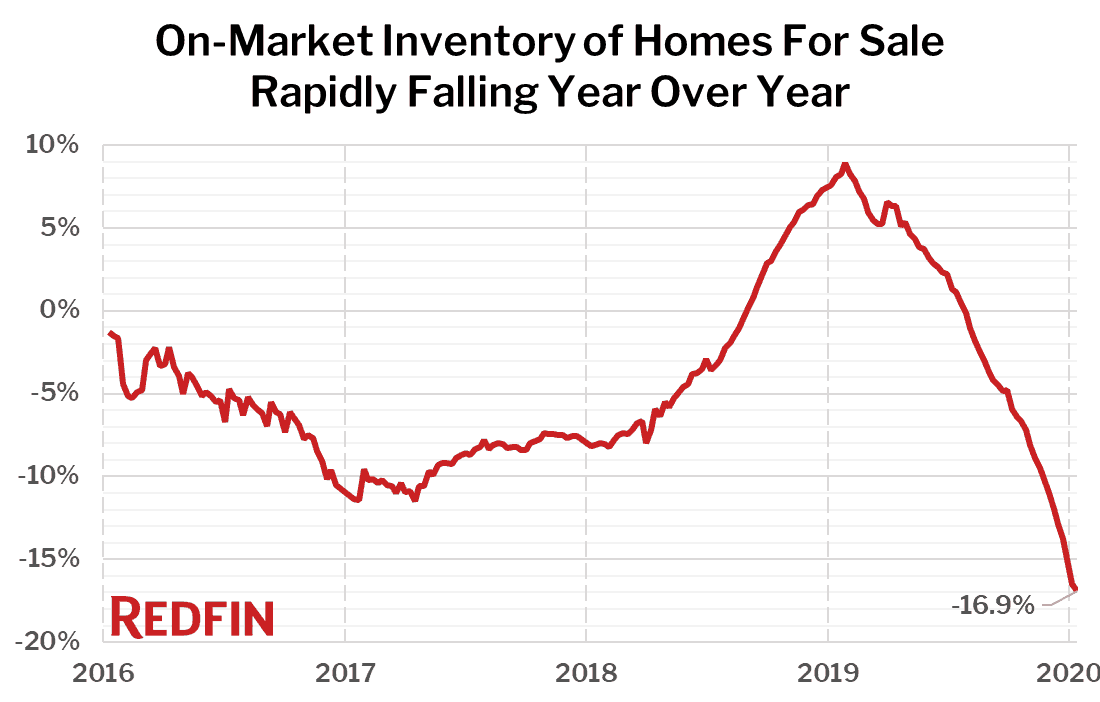 The direction of this year’s housing market is clear ahead of the Super Bowl.

The U.S. housing market is off to a strong start in 2020 as a deepening shortage of homes for sale and surging homebuyer demand are set to push prices up at the fastest rate in years. Buyers may be coming out of winter hibernation early, but so far the sellers are few and far between, which is setting the stage for intense competition even as the year has just begun.

Redfin CEO Glenn Kelman has previously called Super Bowl weekend “the weekend where the housing market either goes crazy or it takes a nap.” This year, we may not need to wait until game time to see how the housing market is playing out. Homebuying demand is spiking in January as many potential homebuyers are turning into active homebuyers well in advance of the typical spring peak homebuying season.

Unfortunately, the supply of homes for sale has so far been unable to keep up with surging demand. Recent data from the National Association of Realtors show December housing inventory at just 1.4 million units—the lowest level in at least 20 years. Low mortgage rates could also be to blame for the shortage of homes for sale, as homeowners are content to sit on their cheap mortgages rather than list their homes, even when they choose to move up to a larger house.

“With every new release of data this year, I’m becoming more and more confident that demand will be strong in 2020—just as strong as, if not stronger than, in 2018 and 2017,” said Redfin chief economist Daryl Fairweather. “The big question for the housing market this year is supply. Will homeowners sit on the sidelines, content with their refinanced loans, or will they want to get in on the action too and move up, move down, or cash out entirely? New construction is beginning to pick up in some markets though, so even without new listings of existing homes there will be some relief for homebuyers hoping for more selection. However, due to the high cost of acquiring and developing land in expensive coastal cities, much of that new construction will be built far away from urban centers or in already affordable metros.”

It’s typical to see a spike in early homebuying activity, but this year the jump is unusually large. On January 15, the Mortgage Bankers Association released data showing that their Purchase Index—a measure of how many homebuyers are applying for new mortgages—hit an 11-year high. In addition to public data, like the MBA Purchase Index, internal Redfin data—including the number of Redfin users touring homes with our agents—are also showing big year-over-year gains.

Unless a lot of new housing inventory hits the market soon, the 10-year peak in homebuying demand coupled with a 20-year low in the number of homes for sale will lead the housing market straight into the mother of all inventory crunches. That could result in a sudden and rapid rise in bidding wars and spiking home prices.

“It is busier than I expected this year,” said Redfin Boston listing agent Delince Louis. “My first listing of the new year has already received four offers. Low interest rates and low inventory are fuelling activity, and we are seeing activity now that we normally wouldn’t see until March. 2019 was slow, people were worried about a recession, but this year is back to being competitive. A lot of millennials who put their searches on pause last year are coming back now, and they are coming back early because they want to beat the rush.”

Seattle Redfin agent Shoshana Godwin says 2020 already feels busier than even the craziest times in 2017. “I’m regularly seeing homes with well over a dozen offers that sell for hundreds of thousands above list price, even in the middle of our recent snowy week. In a typical year, I’d say to wait it out and expect more homes for sale in the next few months… but now I’m warning clients prices may only continue to rise and the inventory may not appear.”

If the data continues coming in as strong as it has through the first few weeks of January, 2020 may turn out to be the most robust housing market in a decade. That’s great news for those looking to sell a home, but for homebuyers it will mean increasing competition and rising prices.