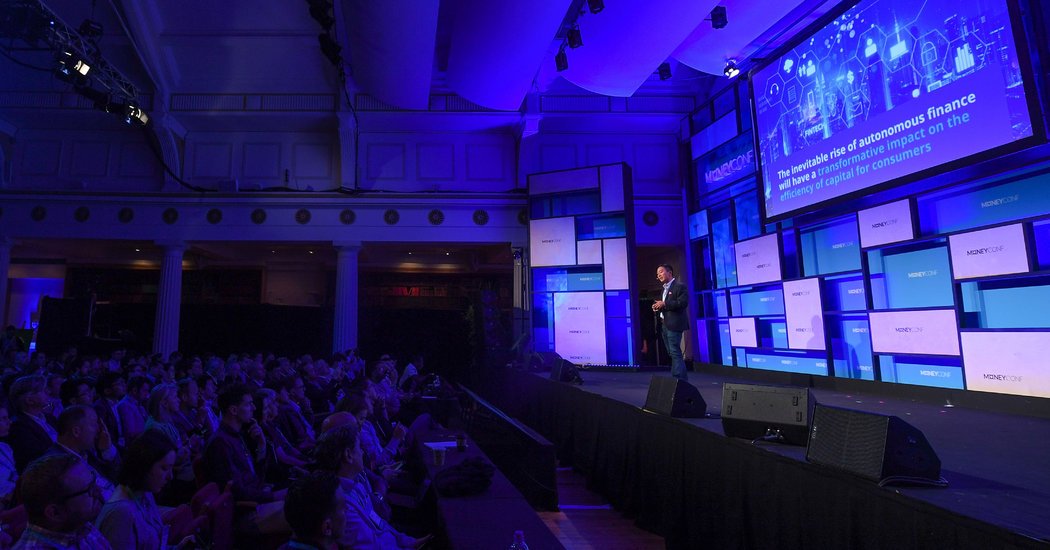 SAN FRANCISCO — Intuit, the parent company of TurboTax and Mint, agreed on Monday to pay $7.1 billion for Credit Karma, a start-up that has become one of the most popular financial applications for young consumers.

The deal, which is being paid for with a combination of cash and stock, is aimed at creating a Silicon Valley financial technology company that can serve as an online financial assistant for people, helping them get their credit scores, file their taxes and find new loans and financial products.

“This is very core to what we’ve declared around helping our customers make ends meet and make smart money decisions,” Sasan Goodarzi, Intuit’s chief executive, said in a conference call with analysts.

The acquisition underscores the value of the financial data of ordinary Americans. Credit Karma grew to be worth billions of dollars by giving people access to their credit scores and then using the information to serve them advertisements for new credit card and loans. The start-up said it had more than 2,600 data points on each of its customers, such as their Social Security numbers and outstanding loans.

The company has been at the leading edge of a large group of financial technology start-ups that have encouraged younger consumers to make more of their financial decisions online and through their phone. These services, like those offered by social networks, are often paid for through the exchange of data and ads.

Credit Karma says it has 100 million customers, including a third of all Americans who have a credit profile and half of all millennials. That is twice as many total customers as Intuit, which belongs to an older generation of online financial firms and has been looking for ways to appeal to younger audiences and make better use of the consumer data it controls.

The reliance on data could be a sensitive area as regulators become more concerned about the security and privacy offered by companies that control lots of consumer data. Banks have also become increasingly hesitant about allowing companies like Credit Karma to gain access to their customer data.

Mr. Goodarzi, though, said on Monday that “consumers are very much willing to consent for their data to be used for their benefit.”

After news of the deal leaked over the weekend, Intuit’s stock fell 3.6 percent on Monday before rising in after-hours trading.

Credit Karma’s decision to sell itself to Intuit pointed to the increasing skepticism that investors have been showing toward tech start-ups. Credit Karma had been expected to pursue an initial public offering. But several prominent young tech companies, such as ride-hailing companies Uber and Lyft, went public last year — and have seen their stock prices fall after Wall Street questioned whether they could make money.

Credit Karma was started in 2007 by Kenneth Lin, who is the chief executive, and two co-founders after Mr. Lin had trouble acquiring his own credit score. Signing up for the site became a rite of passage for Americans looking to get their credit score in shape to apply for a mortgage.

Unlike many start-ups, Credit Karma has a proven business model and reliable revenue. It gets a commission of a few hundred dollars every time someone accepts a new credit card or loan offer that it advertises. The start-up said it had $1 billion in revenue last year, up 20 percent from 2018.

But Credit Karma’s success has spawned many imitators. Many financial firms now give customers free access to their credit scores. Credit Karma has been trying to expand its offerings and gain access to more customer data by offering new free services like tax filings.

Intuit said that after the deal closed, likely in the second half of the year, Credit Karma will operate independently and remain in its offices in San Francisco. Mr. Lin will continue leading the business. That will mean, at least in the short term, that both companies will offer competing tax-filing services.

But Intuit and Credit Karma said that by joining forces, they hope to provide a much broader array of financial advice and products, including home loans and insurance.

They said they were particularly focused on helping struggling Americans who were the least informed and the most confused about their financial situations.

“We believe we can level the playing field for the most disadvantaged consumers in the financial system,” Mr. Lin said.