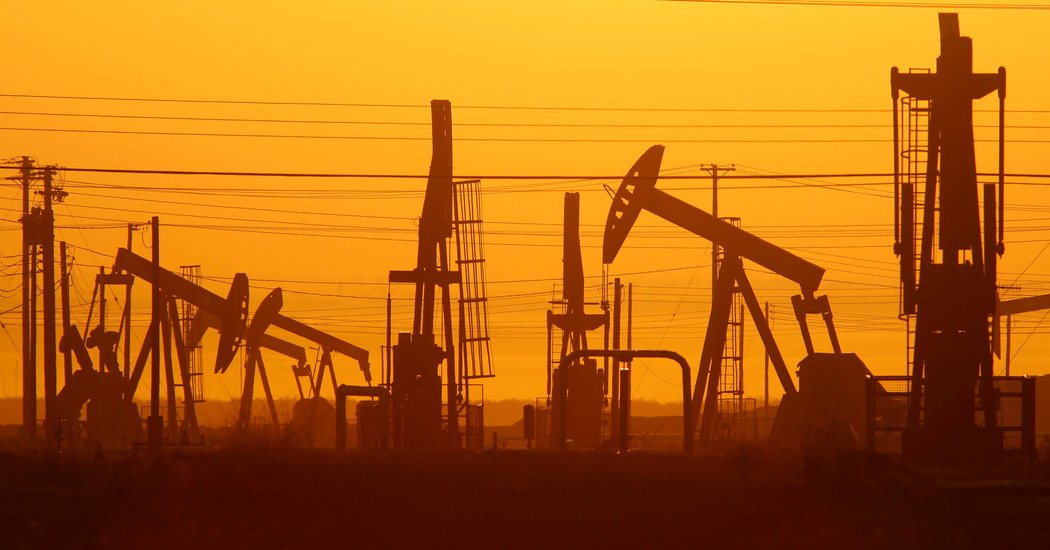 Oil prices jumped about 4 percent Friday, and Wall Street opened about 1 percent lower, on news that a powerful Iranian military leader had been killed in a strike authorized by the United States, ratcheting up geopolitical tensions in a region that supplies around 25 percent of the world’s oil and threatening to disrupt global supply.

The price of Brent oil, the international benchmark, surged to nearly $70 a barrel after the Pentagon said President Trump had authorized the airstrike against Maj. Gen. Qassim Suleimani at Baghdad’s airport. West Texas Intermediate, the American oil benchmark, also rose more than 2 percent, to $62.51 a barrel.

On Wall Street the S&P 500 opened about 1 percent lower, following global markets, but recovered much of that ground later in the morning. Hong Kong’s Hang Seng lost 0.3 percent, and Germany’s DAX index was trading 1.7 percent lower.

Analysts warned that Iran would interpret the strike as an act of war. Iran’s supreme leader, Ayatollah Ali Khamenei, pledged “harsh retaliation,” according to Iran’s state news media. These developments raised the prospect of volatility in Iran and Iraq, two major oil producers.

Around noon in New York, Brent crude oil was trading at about $68 a barrel.

The immediate price jump was among the largest since an attack on a critical Saudi oil installation in September temporarily knocked out 5 percent of the world’s oil supply. While Friday’s strike did not target any oil production, it raised fears of a protracted conflict in the region that could involve strategic attacks on oil fields.

In other markets, investments that are considered havens safe from market turmoil, such as gold and currencies like Japan’s yen, strengthened on the news.

The coming days could bring further pressure on assets that investors consider riskier, like stocks. It could also threaten a rally that began just a day ago in global markets.

Why did oil prices jump?

The killing of the Iranian Revolutionary Guards commander inevitably raises fears about further instability in a region critical to the world’s oil supply. While sanctions imposed by the United States have cut Iranian oil exports to a trickle, other critical oil producers, including Saudi Arabia, Kuwait, Iraq and the United Arab Emirates, are clustered around the Persian Gulf.

It remains to be seen how Iran will respond to the loss of a top leader, but there is widespread concern that whatever action Tehran takes might affect these crucial oil supplies and push prices higher.

“Iran’s ability to impact the U.S. will probably be mostly within the Middle East theater,” said Neil Beveridge, a senior analyst at Bernstein, a market research firm. “Iraq and Saudi Arabia are obvious targets.”

Tensions in the Strait of Hormuz

Tankers carrying most of the oil leaving the Persian Gulf region — about 18 million barrels a day — as well as giant vessels loaded with liquefied natural gas, must pass through the Strait of Hormuz, a narrow channel that separates the United Arab Emirates, Oman and Iran and leads to the Indian Ocean.

The strait is 21 miles wide at its narrowest point, and the width of the shipping lane in either direction is just two miles wide, according to United States Energy Information Administration.

Iran’s coastline covers much of the east side of the Gulf, leaving Tehran well-placed to harass shipping with small boats, missiles, mines and other weapons. Last year, Iran seized a number of tankers in the area in an apparent effort to show that if Tehran were not permitted to export its oil, then supplies from other producers in the area were at risk.

Market participants worry that Iran could step up such attacks on shipping, although such a move would be likely to bring a quick response from United States military forces in the area.

Iran has other options for retaliating against Washington and its allies. It was clear in September that key Saudi oil installations could be knocked out with missile and drone attacks. Analysts worry about a similar strike by Iran, or a larger version.

Analysts also say that the oil installations of Saudi Aramco and other producers around the Persian Gulf could prove vulnerable to cyberattacks that might severely disrupt their operations.

Having just raised more than $25 billion through Aramco’s initial public offering, the Saudis have an interest in easing tensions in the region, and have been trying to solve problems like a long-running dispute over oil with Kuwait. But they could still find their oil industry under attack, analysts say.

Iraq’s oil fields could be at risk

Analysts say that Iraq, which has become the second largest oil producer in OPEC after the Saudis, could be where conflict between the United States and Iran plays out.

“Iraq is potentially the geopolitical flash point for 2020,” said Amrita Sen, chief oil analyst at Energy Aspects, a market research firm. If Iraq does become the scene of escalating conflict between Tehran and Washington, “you can imagine, then, that the fields could be at risk,” she said, referring to the oil fields that supply around 5 percent of world oil supplies and leading to a much larger surge in prices.

Exxon Mobil and Chevron, which has been exploring in the Kurdistan region in the north, said they are monitoring the situation. “Exxon Mobil has programs and measures in place to provide security to protect its people, operations and facilities,” said Julie King, a company spokeswoman in an email.

“With trade wars receding, the heightened tensions in the Middle East may be poised to make a more meaningful impact on the oil market in 2020,” Ms. Croft wrote in a note to clients on Thursday.

Even before Friday’s events oil prices were edging higher as the outlook for supplies tightened. An agreement in December between the Organization of the Petroleum Exporting Countries and Russia to cut output has given oil prices a lift.

Analysts at Kpler, a firm that tracks oil shipments, said in a note published Friday that Saudi Arabia “clearly attempted to send a message” by cutting December exports by nearly 800,000 barrels a day, to 6.3 million barrels a day, the largest monthly decrease in five years. Analysts said that some refiners have not been able to buy as much oil as they wanted.

The prospect that President Trump will sign a partial trade deal with China has also eased the concerns about weak oil demand that weighed on the oil market in 2019. China is the world’s largest oil importer.

“Nobody’s worried about China now this year,” said Mr. Beveridge of Bernstein, who said that markets may be shifting back to a focus on geopolitics.

Do problems in the Persian Gulf affect the United States?

Thanks to the shale oil boom the United States is now much less dependent on oil from the Persian Gulf than it once was.

The United States is now a net exporter, competing with the Saudis and other Persian Gulf producers for markets. Asian countries like China, Japan and India are now major destinations for oil from the Persian Gulf, and would be most directly threatened by any disruption.

Oil, though, is a globally traded commodity, and so American consumers would feel the impact of any outages in the Persian Gulf or elsewhere in the prices they pay at the pump.