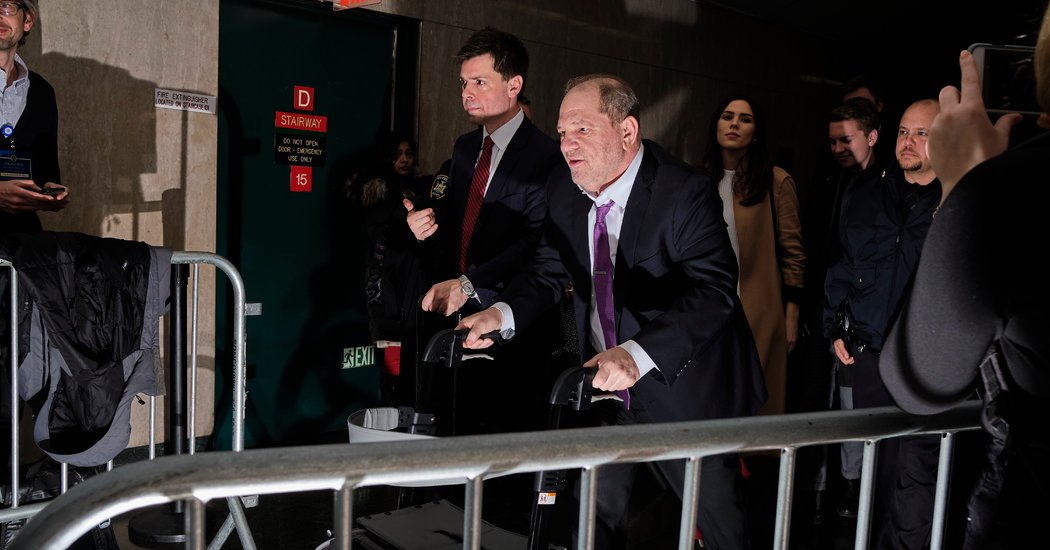 It has been nearly two and a half years since the sexual misconduct allegations against Harvey Weinstein burst into public view, and much is different in Hollywood.

But the entertainment industry has been doing things a certain way for decades, and not every aspect of it has been quick to change. Even as Mr. Weinstein was found guilty on Monday of two felony sex crimes, Hollywood largely remains a man’s world.

Take the Oscars, moviedom’s ultimate show of power and prestige. For the ninth time in 10 years, the Academy of Motion Picture Arts & Sciences did not nominate a woman for best director in 2020. Only one of the 20 acting nominations went to a person of color. And with the exception of “Parasite” and “Little Women,” the majority of the films honored by the Academy — “The Irishman,” “Ford v Ferrari,” “Once Upon a Time … in Hollywood” and “Joker” — were portraits of white men directed by prominent white auteurs.

“I hear people saying a lot of things they hadn’t said before: that inclusion matters, that they understand the need for representation, that they believe in diverse people and perspectives being centered,” the writer and director Ava DuVernay said. “But saying it and doing it aren’t parallel tracks.”

One group of high-powered women in town maintains a running list of the white men who keep rising up the executive ladder while the women stay at least one step below. Jennifer Salke, for instance, became the head of Amazon Studios in 2018 after her predecessor, Roy Price, was accused of sexual harassment. But the former Sony executive Mike Hopkins was brought in last month to oversee Amazon’s video entertainment business. Ms. Salke reports to him and he reports to Jeff Bezos, the Amazon founder.

It is unlikely that accused harassers like Brett Ratner, James Toback, Charlie Rose and Matt Lauer will return to the public eye anytime soon. (Those men, and Mr. Weinstein, have denied any allegations of nonconsensual sex.)

But many in town remain frustrated by those who were accused of improprieties — or who worked closely with those who were — and have been allowed to return to work. Case in point: John Lasseter, who was removed from his position as the creative chief of Pixar after acknowledging misbehavior in 2018, landed a top job at Skydance Animation last year. The former Weinstein Company partners David Glasser and Bob Weinstein, Harvey’s brother, have each formed new production companies. Mr. Glasser raised some $300 million in financing from partners such as Ron Burkle, and has become a fixture on the festival circuit.

“No matter how much things are shifting in the right direction, when you get to the top of these media companies, you will usually find a white dude,” said Nina Jacobson, a veteran producer and the former president of Disney’s Buena Vista Motion Pictures Group. “The power behind the power is still white and male, and in terms of truly passing the torch in corporate life, the torch has not yet been passed.”

On the whole, Hollywood has become a more inclusive place. It has been helped by the rise of streaming services, which have a seemingly insatiable need for more content that appeals to new and diverse audiences. Women and people of color have been finding their voices through organizations like Time’s Up and ReFrame, which have transformed the issues of gender and racial equality from tired buzzwords into vital, concrete paths to addressing the imbalanced power structures that some blame for allowing abusers like Mr. Weinstein to flourish.

“I think that the very small group of people that are waiting for things to even out and go back to the status quo need to realize that’s never going to happen,” said Nina Shaw, an entertainment lawyer and a co-founder of Time’s Up. “But we also need to figure out a way forward.”

Last summer, as the showrunner Melissa Rosenberg began developing a pilot for HBO Max based on the prequel to the 1998 film “Practical Magic,” she noticed stark changes in corporate attitudes.

“There were very specific intentions from the studio and the network to have diverse voices in the room,” said Ms. Rosenberg, who created the Netflix show “Jessica Jones” and was an executive producer for “Dexter.” She added that she had been told, “You will not have a room without people of color and diversity of gender and sexual orientation.”

“That was a big change,” Ms. Rosenberg said. “When I was coming up it would be sufficient to have one woman in the room — to represent the female voice — and she was often the lowest-paid writer, too.”

Today’s issue in television is one of supply. Rarely are episodic series staffed with an all-male director slate, unless the show’s creator opts to direct each episode. More frequently, women are landing directing gigs.

With so many shows being produced, there aren’t enough women to fill the demand. “The problem now is a pipeline problem,” Ms. Shaw said.

Mark Gill, who was president of Miramax Los Angeles when Harvey Weinstein ran the company, was the only man to speak out in the New York Times article in 2017 that first chronicled Mr. Weinstein’s abuse. He said then that the company “was a mess” but that Mr. Weinstein’s treatment of women “was the biggest mess of all,” a quote that drew the ire of his male colleagues when it was published.

“I got a ton of blowback,” Mr. Gill said in a recent interview. “It was sort of a violation of the code. Several people actually said to me, ‘You’ve just blown your career.’”

Mr. Gill has since started a production company with $400 million in financing and a staff that is divided equally between genders. “Of course, it turned out to be the exact opposite,” he said of the warnings he received. “It turned out to be a recruiting advantage.”

Hollywood has marked its intention to adapt with the formation of support organizations. These include Time’s Up, the celebrity-fueled group that in addition to condemning sexual harassment has formed a legal-defense fund to help connect women of various industries to lawyers, and ReFrame, an organization run by Women in Film and the Sundance Institute with the goal of achieving gender parity in the entertainment industry. Women in Film also started an independent help line for anyone who has been harassed or abused to call to be connected with pro bono lawyers or therapists.

“Women have less trepidation about helping each other, networking with each other, being vulnerable with each other,” said the producer Amy Baer, the board president of Women in Film. “I think this is a direct result of #MeToo and women realizing that there’s strength in numbers and in having each other’s backs, much the way the boys’ network has worked for decades.”

The SAG-AFTRA actors’ union has turned the job of intimacy coordinator, a profession that began on theater stages, into a cottage industry inside Hollywood. And it has developed a set of guidelines and protocols for how the coordinators are integrated into sets.

“It’s been an interesting process,” said the actress Gabrielle Carteris, who is president of the union. She worked closely with actors, directors, writers and the coordinators over the past two years to determine the protocol that was released in January.

“When you think about the Harvey period from a few years ago, people felt like they had no control,” Ms. Carteris said. “There was no structure. Now people are saying: ‘I can do this work. This is amazing.’ I think this moment is a step towards cultural change.”

Still, systemic transformation is slow. According to a 2019 study from the University of Southern California’s Annenberg Inclusion Initiative, only 17 percent of executive positions in major media companies were held by women, with only four of the women coming from underrepresented groups. Producing stats are equally dismal, with just 18 percent of producers on films between 2016 and 2018 being women. (Only 11 percent of all producers came from underrepresented racial or ethnic groups.) While “Captain Marvel,” “Harley Quinn,” “Wonder Woman” and other female-centered blockbusters have come to the screen with female directors at the helm, most theatrical blockbusters based on well-worn intellectual property — the bread and butter of today’s movie business — still belong to the men.

“Inside, deep inside, I’m not seeing wheels turn beyond surface statements,” Ms. DuVernay said. “I think Time’s Up is effective and still pushing hard. But without a real threat or adverse impact, systems don’t change overnight. As I’m experiencing it now, I’d say it’s at 4 on a scale of 1 to 10. Which is significant, seeing it was at a negative 20 before.”