PHILADELPHIA — On a brisk January morning Markus Mitchell arrives at his desk at 8:30, his phone ringing before he can even log in to his computer. An employee at the giant nonprofit where Mr. Mitchell works is locked out of the organization’s network and needs the 24-year-old’s help.

Mr. Mitchell became a full-fledged employee at JEVS Human Services in Philadelphia in October, after a year as an apprentice. Just three years ago, he was making $13,000 working in the kitchen at a Chick-fil-A, feeling unsure about his future. Landing the $38,000-a-year position was the latest step in a rapid career ascent made possible in part by America’s record-long economic expansion and low unemployment rate.

President Trump frequently celebrates the experience of black workers, noting correctly that the group’s unemployment rate is at its lowest on record.

Their wages are also going up — a New York Times analysis of government data found that wage growth for black workers has accelerated recently after lagging for much of the decade-long economic expansion. 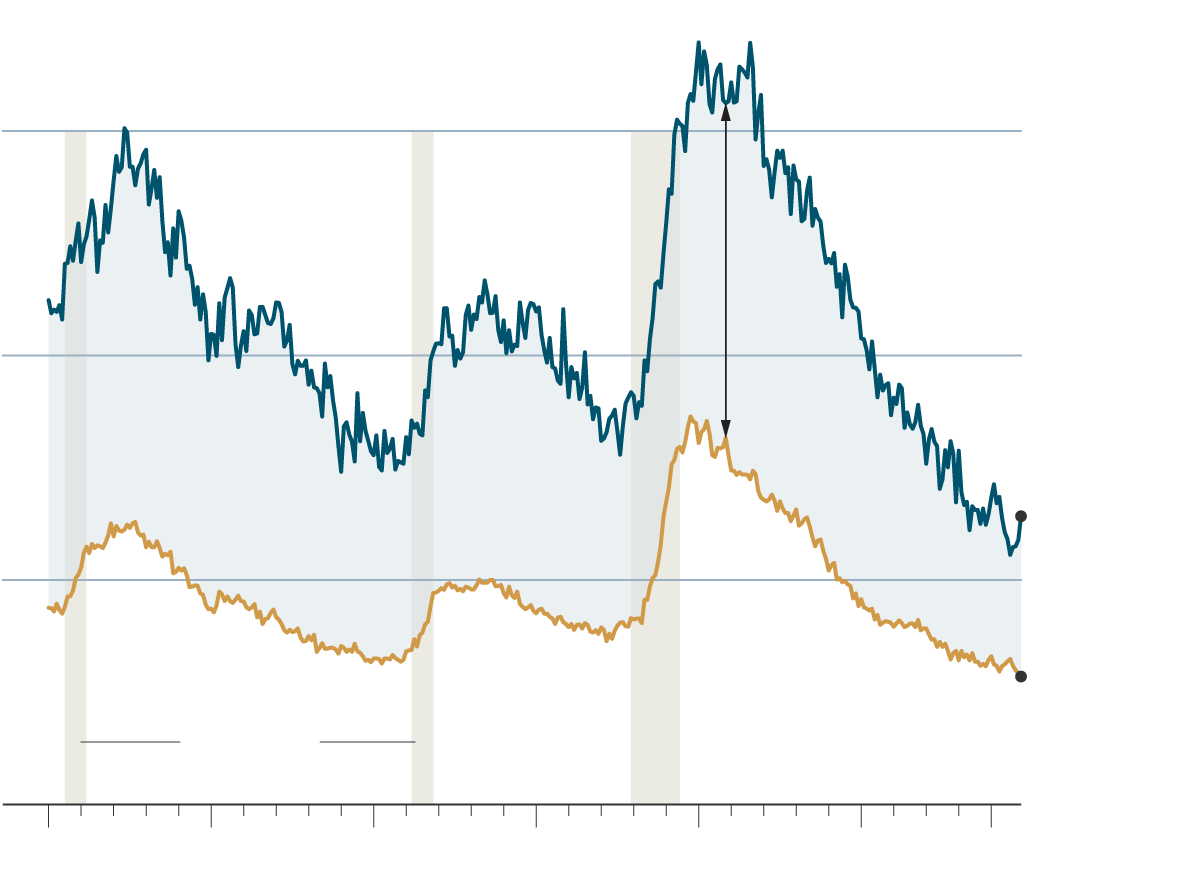 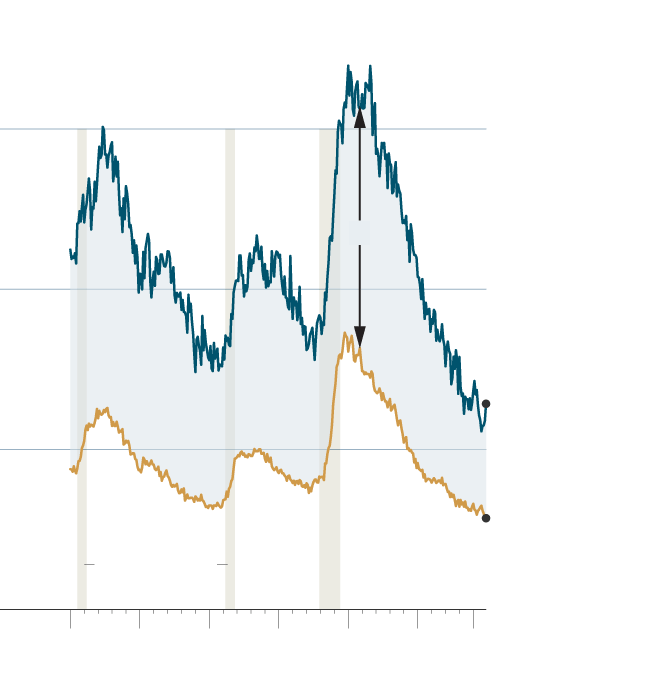 But when Mr. Mitchell looks around his relatively low-income and heavily black neighborhood, he worries that the rising tide of a strong economy has not been equally good for everyone in his community. And when it comes to his own labor market gains, he’s working hard to make sure they do not prove fleeting.

A malignant reality lurks beneath the happy surface as black workers finally make job market progress. Not only did the gains take a decade of steady job growth to materialize, but they could evaporate at the first sign of economic weakness, as they did after previous expansions.

In April 2017, Mr. Mitchell quit his low-paying job, hoping that he could achieve a better life. By June that year, he was in a training program, one that helped connect him to another backed by JEVS. That led to a pre-apprenticeship role in partnership with AmeriCorps, then an apprenticeship and now his full-time job.

He has one certification, is working on another in networking and could even progress to a cybersecurity test down the road. He’s conscious that without a college degree he has challenges, but hopeful that his on-the-job experience and practical training will help him weather future downturns.

“I know that the fact that I don’t have a degree puts me at a disadvantage, over my peers,” he said. “I’ve gained enough knowledge to go and do computer work for people myself, so if that’s what I had to do, I’d do it.”

Mr. Mitchell’s story is, on one level, a lesson in the power of a strong labor market to lift up disadvantaged communities. When workers are scarce, companies are more likely to hire people without much experience or formal education, and to provide training to help those employees succeed. Employers are also more likely to consider candidates with disabilities, criminal records or other barriers to work and to offer other options, like flexible hours, to attract people with caregiving responsibilities.

Companies are also more likely to raise pay. Wage growth, which was sluggish for much of the recovery, has picked up in recent years, with the strongest gains among workers at the bottom of the earnings ladder, in jobs that are often concentrated in the service sector, like fast food and retail.

The Federal Reserve sees the continually expanding work force as a key reason for future patience on interest rates. Mary C. Daly, president of the San Francisco branch, has said Fed officials should see how far the labor expansion can run “experientially.” 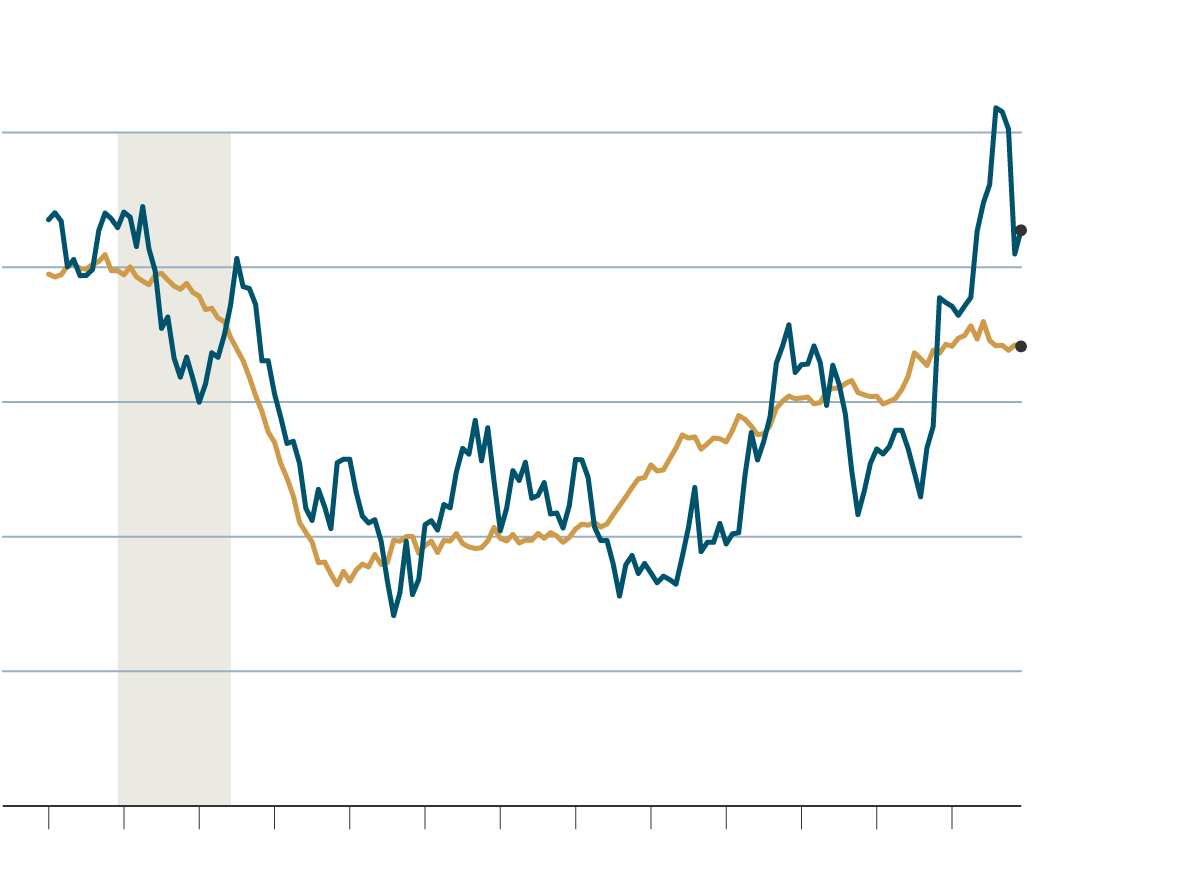 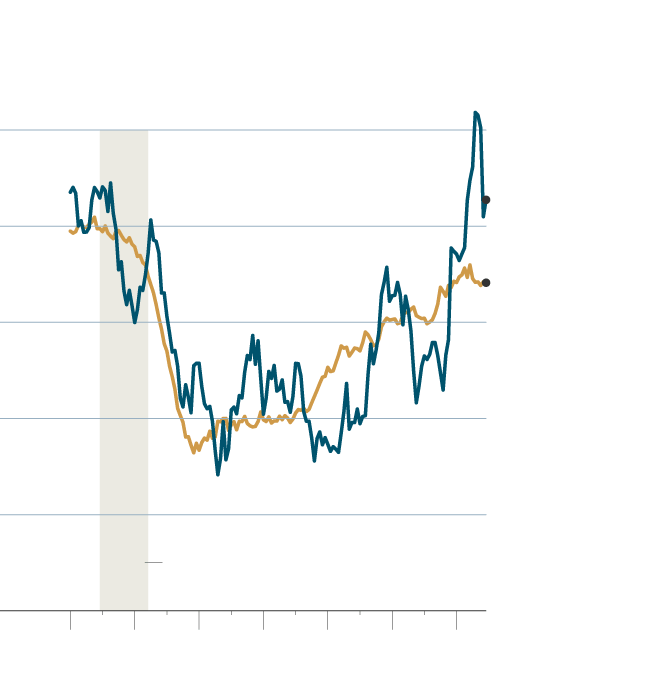 But tight labor markets alone cannot undo established structural barriers. Even now, the unemployment rate for black Americans is double that of whites — a figure that does not even take into account higher rates of incarceration for black men in particular. The median black worker still makes 78 cents to the median white worker’s $1 each week.

He has lived in his home, which is subsidized, since his family ran into hard times around the last recession. His mother, a teacher, had to take time off work after a bad car accident — and then struggled to find new work as the economy reeled. Since she was the primary breadwinner for her five sons, including one with a severe disability, it was a major blow.

The boys were interested in college, but for Mr. Mitchell, high school changed that. He felt that his teachers did not care about him, especially after concerns about the building’s safety forced his high school to shut down before his senior year. Fights plagued the hallways of his new school. There were cages on the windows.

“It was waking up to go to a day care, that was actually a jail, that you could freely walk out of,” he said.

He cut classes, sneaking out a side door to the freedom of the surrounding city. Though an avid reader — his dresser is buried under psychology classics, as varied as Dale Carnegie and Machiavelli — he failed English. He was pushed through graduation anyway.

Early adulthood flowed by in a string of odd jobs.

He worked in poison ivy removal (he stopped getting a rash after the fourth or fifth outbreak) and had a short stint at UPS before starting work at Chick-fil-A, where he made $9.50 an hour. He promised himself the job would be short-lived, and spent his mornings and nights reading computer-related training material.

But more than a year in, as he was cleaning the floors at Chick-fil-A, a moment shook him.

“I was squeegeeing water up, and these guys walked in,” he said. They were technicians, sent there to fix the restaurant’s computer network. They were close to his age, and he couldn’t help comparing their work with his own. “I just told myself: Here’s the risk, here’s the reward. What are you going to do?”

It took a few months to finally quit. He was getting a lot of hours at Chick-fil-A, and helping his mother, who now works at a day care, to pay rent.

“I knew computers, and people with skills in computers, were in demand. I knew it in my heart,” he said. But at the same time, “who is going to pick this kid up with no college degree, no experience?”

His timing was ideal. The shortage of qualified workers in information technology is prompting employers to cast a wider net, fueling demand for apprenticeship programs like the one he completed.

“We know because of the economy, employers are trying to expand the pipeline of talent that they’re tapping,” said Edison Freire, a former teacher who founded the apprentice program Mr. Mitchell went through. 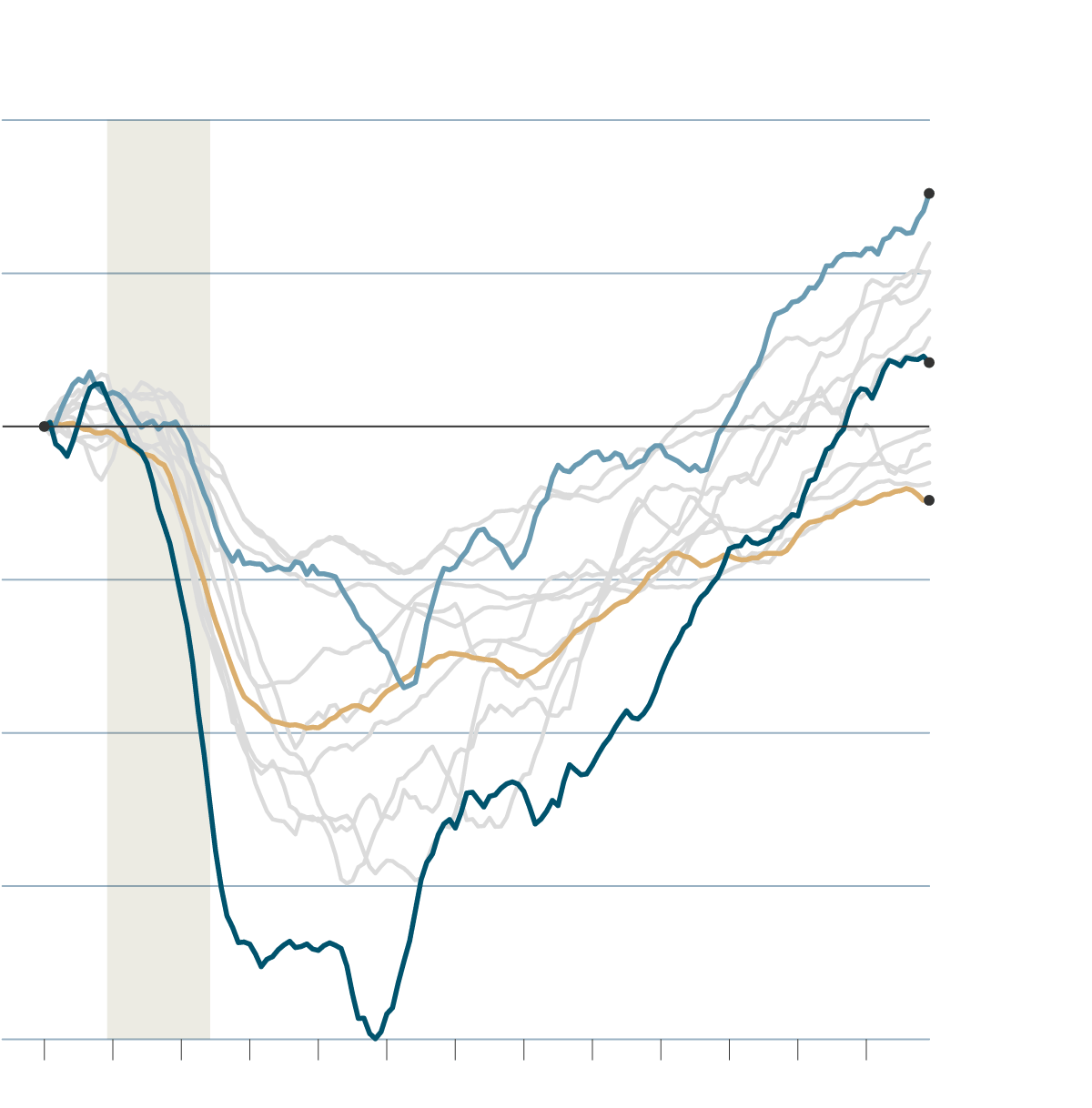 Change in employment rate since January 2007 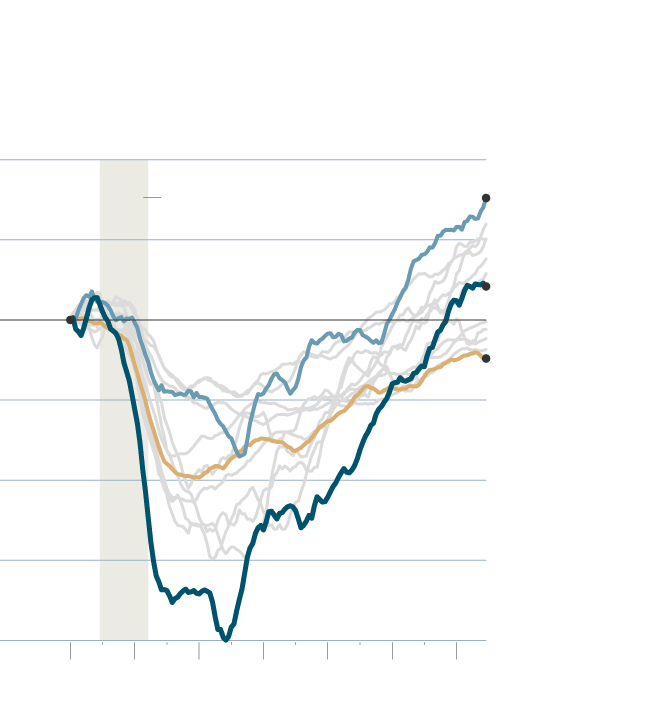 Mr. Mitchell has made huge gains in the past few years. But his long-term prospects remain uncertain. He still doesn’t have a college degree. He is hoping that his certificate and experience make up for that, but they have yet to be tested in the crucible of a recession.

What happens to Mr. Mitchell and others like him has implications for the broader economy. Historically, the gains made during periods of low unemployment have proved transitory for black workers, who are among the last to benefit from a good economy and among the first to suffer in a downturn.

But there have been few past examples of a labor market as strong and sustained as the current one. Some economists hope that as more workers like Mr. Mitchell get a foothold in the labor market, and even manage to climb a few rungs up the ladder, they will be better positioned to weather an eventual recession. That larger pool of workers would leave the American economy better off in the long run.

Today’s solid labor market comes with costs. A strong economy fuels urbanization and lifts rent, and can make it harder for lower-income minority families like Mr. Mitchell’s to get by. Rent has marched up along with his salary as the family’s housing vouchers have been reduced. Money is manageable, but Mr. Mitchell remains frugal — when he eats a $3 cheesesteak for lunch, he carefully wraps half of it for later.

But Mr. Mitchell has big goals. He is hoping that he and his younger brothers can pull together sufficient savings to move themselves and their mother to another neighborhood. He loves where he grew up, but it’s changing — gentrifying, diversifying. And the bustling local market doesn’t seem to be pulling black workers up with it.

He noted that Pennsylvania’s minimum wage has not increased, and “very seldom do I hear of someone getting a better job.” (Philadelphia last year raised the minimum wage for city employees and contractors, but state law prohibits the city from raising the floor for all workers. Federal efforts have yet to gain traction.)

Philadelphia is a university town, but he worries that it is not focused on educating its native youths, a group that is heavily black. Standing outside his old high school last month, he glumly pointed out the door he used to skip classes. Nobody stopped him, he said. And years later, a steady stream of students — mostly racial or ethnic minorities — are still pouring out.

“I don’t see much of a change, as far as my people elevating economically,” he said. “There’s often a loophole through things, sometimes there’s not. I was lucky enough to be blessed with one.”