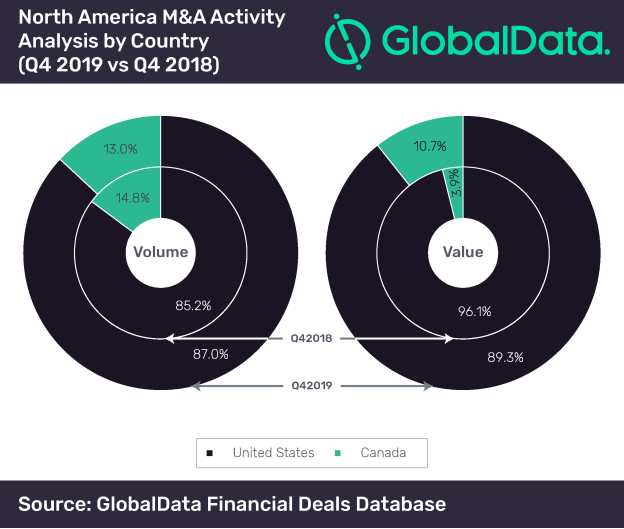 The North America region witnessed a slump in mergers and acquisition (M&A) deal volume in the fourth quarter (Q4) of 2019, according to GlobalData, a leading data and analytics company.

Notable M&A deals announced during Q4 2019 in North America included; the merger of International Flavors & Fragrances with DuPont Nutrition & Biosciences for US$26.2bn, the acquisition of TD Ameritrade by Charles Schwab for US$4bn, and the acquisition of Tiffany by LVMH Moet Hennessy Louis Vuitton for US$16.2bn, among others.

The US topped the North American region in M&A deal activity with 2,479 deals accounting for 87% of the total deals announced during Q4 2019. However, it witnessed a decline in deal volume and value during Q4 2019 compared to Q4 2018. 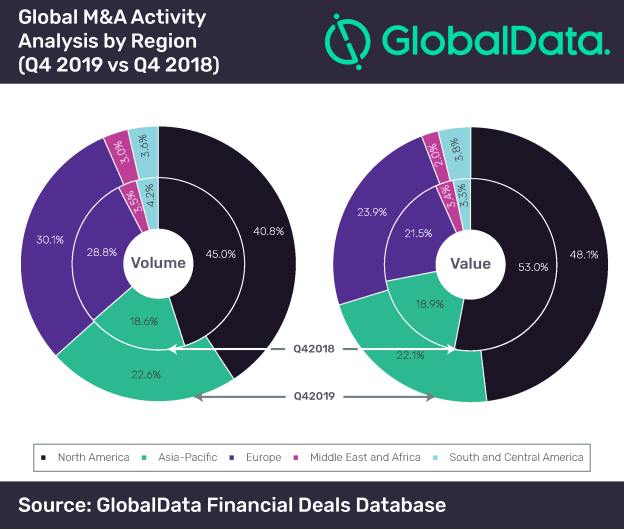 Global mergers and acquisitions (M&A) activity remained subdued with a decline registered both in deal volume and value in the fourth quarter (Q4) of 2019, according to GlobalData, a leading data and analytics company.

Amidst underperformance of several regions, Asia-Pacific and Europe emerged as the top performers for M&A activity. 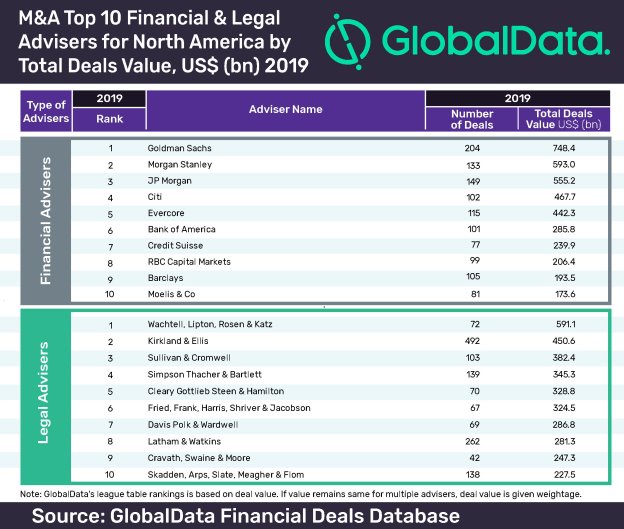 Goldman Sachs has dominated the latest mergers and acquisitions (M&A) league table of the top 10 financial advisers in North America based on deal value in 2019, according to GlobalData, a leading data and analytics company.

The American investment bank advised on 204 deals worth US$748.4bn.

According to GlobalData, which tracks all M&A, private equity/venture capital and asset transaction activity around the world to compile the league tables, Morgan Stanley ranked second with 133 deals worth US$593.0bn.

Ravi Tokala, Financial Deals Analyst at GlobalData, comments: “Despite a spike in North American targeted megadeals (>US$10b), the region saw a 7% decrease in total deals value in 2019 over 2018. Almost all top 10 legal and financial advisors participated in these megadeals, which were instrumental in deciding legal and financial advisor league table rankings in North America.”

Law firm Wachtell, Lipton, Rosen & Katz emerged as the lead player in the list of top 10 legal advisers, in terms of deal value. It advised on 72 deals worth a combined US$591.1bn. Kirkland & Ellis occupied second position in terms of value, advising on 492 deals worth US$450.6bn. In the global league table of top 20 M&A legal advisers, Wachtell, Lipton, Rosen & Katz secured number one position.