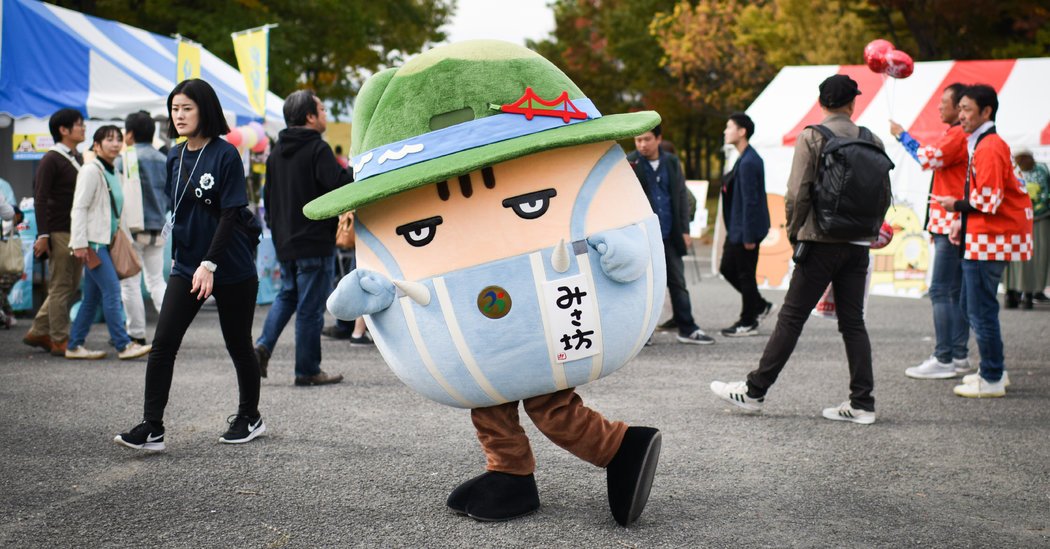 NAGANO, Japan — The mayor of Misato, a remote village of 4,700 people in rugged western Japan, laid down an ultimatum early last year: The local mascot character, Misabo, must prove his worth. Or else.

Misabo, a gloomy boar with a mountain on his head who wears whale overalls hiked up to his snout, has the daunting job of promoting the village as a tourism destination. He waddled into the world in 2013, as a mascot craze swept Japan and hundreds of the country’s graying and shrinking towns turned to colorful, often wacky characters to lure visitors and investment.

Now, as their tax bases dwindle along with their populations, communities like Misato are increasingly questioning whether the whimsy is worth the cost in public spending. In the absence of much evidence that the characters are delivering economic benefits, the answer for many towns in the grip of Japan’s demographic crisis has been to quietly mothball them.

“It was a boom without any reality,” said Akihiko Inuyama, an author and designer who wrote a book about the mascot industry.

It is impossible to know exactly how many mascots, who plug their hometowns as both illustrated characters and humans in costumes, have been liquidated. For most, the end comes with the stroke of a bureaucrat’s pen, not a formal announcement. But industry numbers hint at the toll.

Sun.Mold, a manufacturer of mascot costumes, said that orders had dropped by about half from their peak five or six years ago, when the company was producing 20 to 40 outfits a month for the characters, known as yuru-chara.

For a select few, the Grand Prix has been a springboard to riches. Kumamoto, a sparsely populated prefecture on the southern island of Kyushu, reaped a $1.2 billion economic windfall in the two years after its mascot, Kumamon, won the first Grand Prix, in 2011, according to a study by the Bank of Japan.

“It was thanks to Kumamon that yuru-chara became a national phenomenon,” said Shuichiro Nishi, the creative force behind the competition.

When the charmingly plump black bear with rosy red cheeks won the event, the country was still reeling from the catastrophic tsunami and nuclear disaster that had struck northern Japan months earlier. People were “clamoring” for a sense of national connection, Mr. Nishi said.

Kumamon moved mountains of merchandise and drove up tourism. Hit mascots can also lift tax revenue thanks to a program, introduced in 2008, that allows citizens to direct a portion of their income taxes to the locality of their choice.

Inspired by Kumamon’s success, local governments rushed to cash in. As the characters became fixtures on national airwaves, Mr. Inuyama said, the media “tricked people into thinking yuru-chara were making money,” and local governments “went along for the ride.”

More and more, though, it looks like the end of the road. The number of characters in this November’s Grand Prix, held in Nagano, was down a third from the peak of about 1,700 in 2015. Many of the entrants did not even bother to show up. And officials, seeing the writing on the wall, announced that the 2020 contest would be the last.

Misabo’s handlers, however, were not about to give up.

The mayor had given them one year to show that the character was worth the tens of thousands of dollars that taxpayers had spent on him.

With the deadline quickly approaching, the team was hoping for an upset victory at the Grand Prix.

“We need to make the Top 10,” said Ayami Nakada, an employee of the town hall, who had flown to Nagano with two co-workers.

“We don’t know what’s going to happen, but I think it’s important that we stay focused,” she said.

It was a long shot. Misabo, who looks less like a cuddly friend than a guy who just spilled his beer at Oktoberfest, finished in 339th place in the 2018 Grand Prix — a result that may or may not have been affected by a vote-rigging scandal that year.

Since then, Misato’s officials had worked hard and pushed his ranking into the mid-20s. But as voting was drawing to a close, he was still tens of thousands of votes behind the top competitors.

The characters have their roots in the 1980s, when local government mascots first began appearing. They were a natural fit for a country where adorable characters like Hello Kitty are used to sell everything from microwaves to motor oil.

The positioning of mascots as ambassadors for ailing local governments let fans see their hobby as a kind of virtuous consumption or even a public service.

“They represent the national character,” said Masumi Shindo, who had come to the Grand Prix to support Nagano’s mascot, Arukuma, a bear with an apple on his head. “They energize us. When I see them working hard, it makes me want to do my best.”

As mascots flooded the market, character development began to look like a Japanese Mad Lib: Use a local animal as a base. Combine it with a famous local snack or architectural highlight. Give it a terrible pun for a name. Profit!

But the novelty quickly wore off. Copycats were everywhere: Froglike water spirits called Kappa proliferated, and after Sanomaru — a dog with a bowl of ramen on its head — won the 2013 Grand Prix, other animals sporting Japanese noodles popped up.

Misabo made his debut that same year. A local government employee created the character. The first suit cost around $7,200, and the village has since ordered a second one.

With little to set it apart from the many other localities that have also fallen on hard times, Misato leaned heavily on Misabo.

The character’s grumpy disposition was a good fit for his home prefecture’s brand. Shimane, which is one of the poorest and least populated areas in Japan, has turned its obscurity into a resource. In 2011, a calendar created by the local government and filled with self-deprecating jokes about the locals became a surprise hit in Japan.

Misato made Misabo merchandise. It started a YouTube channel. It came up with a dance, the Misabo Samba. It built a slick tourism website prominently featuring the character. It even designed a series of stickers that fans could buy and send to each other on the chat app Line.

Still, nothing seemed to stick. Officials began to wonder if it was time to put Misabo out to pasture.

Hoping to drum up some publicity, early last year Misato’s mayor called a news conference and threatened to fire the character. At one point, government employees held Misabo back as he tried to take a swing at his boss. The story was picked up by the national broadcaster, NHK, and it played well on social media, lifting the mascot’s profile.

But Misabo’s moment in the spotlight had been brief. On the last day of the Grand Prix, with his job on the line, his odds looked as grim as his countenance.

His team pinned their aspirations on skipping rope.

“We’re hoping that winning the jump-rope contest will give us a boost,” Ms. Nakada, the town employee, said as her co-worker did some calisthenics nearby, preparing to strap himself into the unwieldy suit and skip for all he was worth.

After a failed initial attempt, he managed 47 jumps, handily putting him in first place.

In the end, though, it was not enough to overcome the other mascots’ considerable advantages. When the votes were tallied, he came in 24th.

But fear not for Misabo, at least for now. The results seem to have satisfied the mayor. He has agreed to let Misabo mope along for another year.