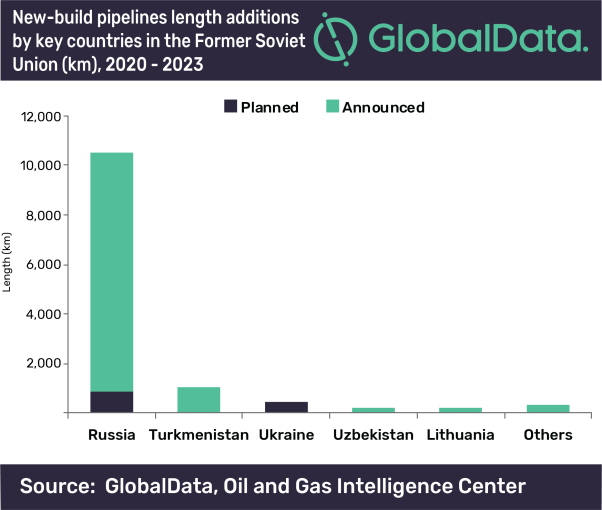 The company’s report, ‘Global Planned Oil and Gas Pipelines Industry Outlook to 2023 – Capacity and Capital Expenditure Outlook with Details of All Planned Pipelines’, reveals that Russia is expected to have new-build pipeline length of 10,497 km by 2023.

Adithya Rekha, Oil and Gas Analyst at GlobalData, comments: “In Russia, a total of 24 new-build pipelines are expected to start operations by 2023. Nord Stream 2 is the longest upcoming pipeline in the country with a length of 2,400 km. It is a shallow water natural gas pipeline expected to start operations in 2020. Gazprom owns a 100% equity stake in the project, while Nord Stream 2 AG is the operator.”

GlobalData expects Turkmenistan to be the second-highest contributor to the region’s new-build pipeline length additions by 2023 with a length of 1,000 km. The entire length is expected to be contributed by a planned pipeline – Central Asia–China Line D. It is an onshore natural gas pipeline that is expected to start operations in 2022. Trans-Asia Gas Pipeline Co Ltd owns a 100% equity stake in the pipeline project and is also its operator.

Rekha concludes: “Ukraine ranks third with a length of 396 km from an announced pipeline – Brody–Adamowo. It is an onshore crude oil pipeline planned to start operations in 2023.”